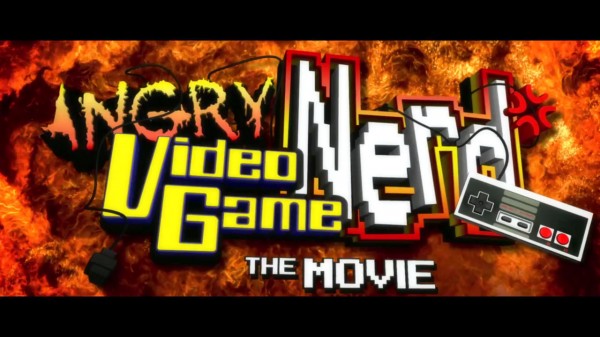 The brainchild of amateur filmmaker James Rolfe, The Angry Video Game Nerd (AVGN) has gained an internet cult following over the last 10 years for his outrageous reviews of the games you hated as a kid.

Watch enough of his videos and you’ll find plenty of over-the-top language, gross-out humour, and cheesy special effects.   But beyond that, you’ll walk away informed, entertained, and quite possibly justified as to why certain games were so tough to beat when you were younger.

And therein lies the magic that resonates with the AVGN.  He doesn’t come across as pompous or condescending to his audience.  He’s an everyman, both as a gamer and a filmmaker; it explained why he was able to raise over $325,000 on IndieGoGo to develop a feature film.

So… how does this character actually translate into a full-length feature film? Well, I’ll tell you!

The movie revolves around the Nerd’s most requested game, both in real life and the movie, E.T. (or Eee Tee as it is used in the movie to avoid copyright infringement) for the Atari 2600.  When a modern-day gaming company finds out about the Nerd’s popularity, they decide to release “Eee Tee Two,” just so that he’ll give it a bad review and make everyone want to play it.   With fans revelling in the conspiracy (now known to be a reality in real life) that all of the game’s cartridges are buried in the New Mexico desert, the Nerd makes it his mission to prove them wrong so that they can move on with their lives, and not be traumatized playing it like he was as a child.

Story-wise, the movie never leaves you bored.  The plot flows smoothly, and it throws in a number of comedic plot elements that haven’t been done before.  Some will have you laughing out loud, some will fall flat, while others will make today’s jaded an cynical audiences thinking “What the hell?!?”  The only gripe I had at first was that the beginning of the movie felt like a complete “Wayne’s World” clone, leaving me worried the rest of the movie would play out the same. Thankfully, it didn’t.

A huge part of the movie’s charm lies in its special effects.  Like the AVGN videos, most of the effects are practical, and not the “James Cameron does Aliens” kind, rather the “I could have done this myself in high school” kind.  It becomes an in-joke after a while. These corny effects are juxtaposed with some really great Godzilla-like throwback effects, reminding you that the movie really can achieve great visuals when it wants to.

You’ll definitely be able to tell who the professional actors are versus their YouTube counterparts.  A few of the takes they used will leave you thinking “Maybe they should have done another one…,” but again, that’s a part of the movie’s overall charm.

In trying to summarize the viewing experience of this movie, it’s conflicting given the fact that I’m a long-time fan of the AVGN videos, and I was actually a featured extra in it for about 3 seconds (full disclosure!).   I think it’s best summarized by a recent Reddit user who posted, “Leave your brain outside of the theater and pick it up at the film’s conclusion and try to have a good time.”

The AVGN videos have so much appeal because of their imperfections, their ability to relate,  and their willingness to take risks with over-the-top storylines leaving you to wonder “WTF did I just watch….?”  This movie captures all of these elements perfectly.  Is this movie going to merit any Oscar-worthy performances? Probably not. However if you end up seeing this movie, just sit back, relax, don’t take anything too serious, and enjoy.

Special thanks to my buddy Doug Baughman for providing us with this exclusive review. Viewings of the movie will be at a location near San Diego Comic Con, unfortunately, it’s currently sold out. However, we’re honored to have Doug share his review with us!

If you want to see where you can catch this movie, follow the link: http://cinemassacre.com/2014/07/23/avgn-movie-screenings-on-sale-now/