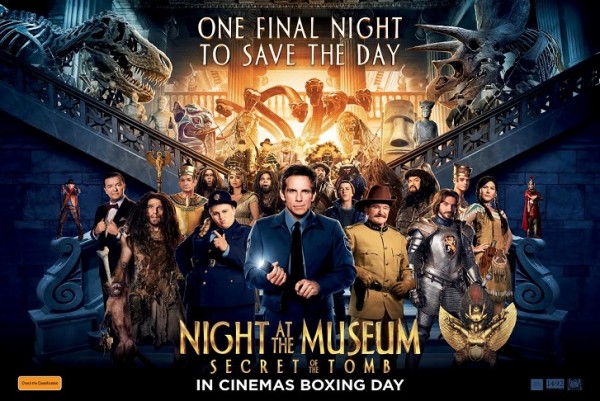 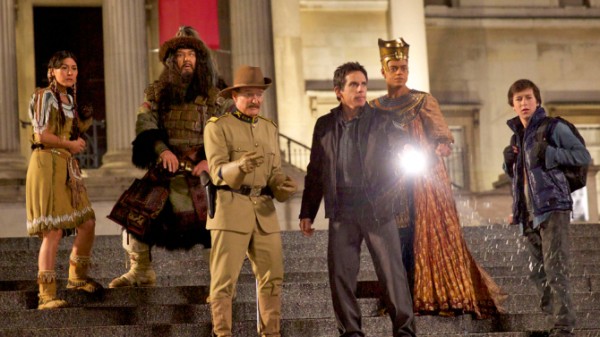 The Night at the Museum sequels both improved on the original simply because they were driven by a single night, not a newbie learning the rules over a series of nights. The original should have been called 3 Nights at the Museum, so the sequels are more accurately singular. Secret of the Tomb isn’t quite as clever as Battle of the Smithsonian but it’s still fun.

We see the origin of the magic tablet in an unnecessary prologue. However, introducing the idea that the tablet is becoming corroded and making the museum nights go wrong is interesting. We’ve seen two movies where simply awakening the museums provides plenty of adventure. When they’re coming back wrong, that’s even more dangerous.

The only ones who can save the tablet are Akhmenrah (Rami Malek)’s parents, who are on display at the London museum. So Larry (Ben Stiller) brings the tablet, and ships the most popular characters from New York, over to London to bring their museum to life. A beautiful visual effect sees bas reliefs coming to life, still confined to their background.

It’s cool that Larry is an expert now. He knows how to wake up a new museum and he knows how to tame a dinosaur skeleton. At least, he has a good idea but each museum and each exhibit is different, so there’s the fun of the unpredictable too. I’m going to have to do some research. Does the London museum really have a snake demon and a mini Pompei exhibit? Those seem like excuses for set pieces, but I can’t be sure. I could vouch for everything in the Smithsonian because I went there so many times as a kid. More questionable: Do all museums really keep defibrillators on hand?

They introduce a new caveman, La, also played by Ben Stiller. This allows Stiller to play a crazier character than the hero Larry, a la Zoolander, and also do schtick with himself. Even though my favorite movie of all time, Labyrinth, did a live action M.C. Escher sequence, I can approve of the Escher bit in Night at the Museum. They did a different take on it and it also looks great. Unfortunately, Owen Wilson and Steve Coogan never look like they’re not on a green screen.

There are some inspired bits with anachronistic meetings of different times, like Sir Lancelot (Dan Stevens) and Roosevelt (Robin Williams). The chaotic finale is just a joy, and even references to modern computers and social media pay off in inspired sequences later.

Secret of the Tomb has the feel of a trilogy, but like any great franchise, it’s totally open to continue. Perhaps different characters will take over, allowing Stiller to focus more on La. There are endless possibilities for different interactions between museums and plenty of international museums that need awakening. Franchise Fred approves.