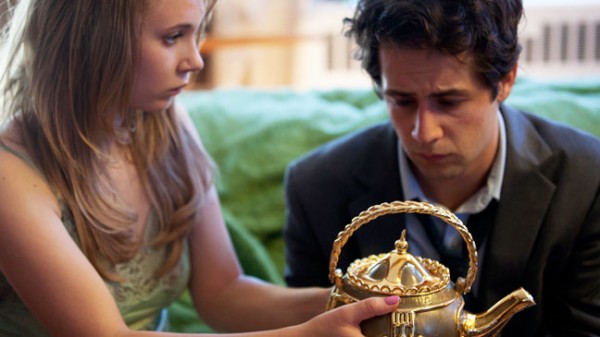 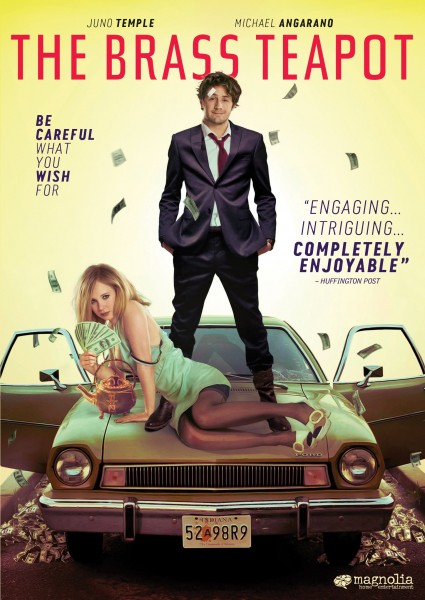 I had been meaning to watch The Brass Teapot for sometime. I’m a Juno Temple fan so I want to see anything she’s in, and I like Michael Angarano too. Having weeks off for the holidays gives me a lot of time to catch up on random movies I missed in the past, although I don’t often write about them. It’s usually enough to go off the clock and watch some movies as an audience, although it’s always good research. I will interview Temple and Angarano again one day and now I have more material.

The Brass Teapot struck me enough in an interesting context that I felt made it worth recommending a two-year-old (three come New Year) movie on Netflix. I recall, actually the same year The Brass Teapot came out, seeing two movies that played with the notion of how far would one demean oneself for money, Would You Rather and Cheap Thrills. Both were fun, both rightfully limited in scope by their genre (a sick benefactor setting up games in a contained location), and neither quite landed a real philosophical statement outside of having some fun watching people abuse each other, which is perfectly fine.

With a more fantastical premise, The Brass Teapot can explore the question a lot further. Financially strapped wife Alice (Temple) steals a brass teapot from a middle of nowhere knick knack shop. When an accident reveals that the  teapot spews money every time she injures herself, Alice and her husband John (Angarano) promise to just make enough money to get out of debt and get set up for life. The film has some fun with their self-abuse, but also pushes the right buttons of how far is too far? What happens when it takes more pain to please the teapot, and what other forms of abuse can pay off?

If the story seems familiar, don’t worry. It reminded me of “Button Button” (filmed as The Box), in which a couple will be financially rewarded if they push a button but someone they don’t know will die. It’s also a little bit “Monkey’s Paw” or any “be careful what you wish for” story. What matters is how the device is used to push the characters, and The Brass Teapot does that beautifully.

Since there is an unlimited source of income, Alice’s imagination is really the only limit to how abusive she and John can be. When they capitalize on natural, even welcome, forms of pain, it’s inventive. When they dabble in psychological pain, that’s an area where Cheap Thrills and Would You Rather were limited to the physical. Regardless of the teapot, the film also asks important social questions we should all be asking in the current economic climate. How much is enough? When do you just stop and enjoy what you have and decide you don’t need any more? How can you plan for those unexpected setbacks?

For an indie, The Brass Teapot is also a mighty polished film, shot in widescreen and full of bright colors. There are some Hassidic beards that do not look remotely like they are growing out of the actors’ faces, but if a guerrilla film had to make one concession, I can live with the beards when the rest of the movie is so sound.

The story gets a little crazy to wrap up all of its loose ends, but it’s effectively crazy throughout so it is established, if a bit convenient. It still forces John and Alice to make the ultimate decision which is what matters. Since the film is now on Netflix, that is probably where you will watch it, but had I seen The Brass Teapot in time to review for theaters, I would have rated it much higher than waiting for Netflix.