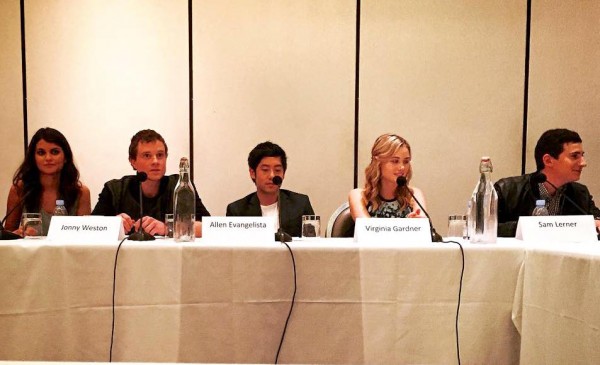 “Project Almanac“ is an edge of your seat film that will be released on January 30th. Yesterday, Nerd Report attended the press conference for the film, and engaged the cast and director Dean Israelite. Held at the wonderful SLS Hotel in Beverly Hills in a round-table style meeting room, the cast was asked some behind the scenes questions, and didn’t skip a beat to answer them.

Brad Fuller and Andrew Form are known for doing a lot of remakes one, “Teenage Mutant Ninja Turtles,” had 30 years of solid branding and a legion of dedicated fans. However, the duo have released original films over the past couple of years, most notably, “Unborn,” “The Purge” and “Ouija’.” Form went on to say,

“With films like “Project Almanac,” you will definitely have to get out there and hit the ground everywhere and educate everyone about the movie.” He added, “Paramount is great at marketing and we knew that this concept was one that was really fun.”

Louis Love of Nuke the Fridge asked the panel, “Who came up with the idea of seeing yourself in the past and the scary “feedback effect?”

They answered that the concept of going back in time was always written into the script that Andrew Deutschman and Jason Pagan had given them from the beginning. The flashback and seeing yourself in the past gave the film a subtle scary feeling that we haven’t seen before in a time travel film.

One question I posed to actors Sam Lerner and Virginia Gardner was,

“Did you guys have as much fun playing your characters as I did watching them and would you do the same thing if you had the chance?”

Many members of the audience could easily relate to Quinn and Christina in the film. Both Sam and Virginia agreed that they both played versions of themselves that even they were able to relate to from their real lives. They both enjoyed playing their characters, and the chemistry they shared came through in their performances as they formed real life friendships.

A great question that was on everyone’s mind, was one Sam Lerner had some fun answering. When asked how did it feel to be able to drive a Maserati, and did you have to sign paper work to do it, a wide smile crossed his face as he established he didn’t have to sign any papers, but perhaps it was the studio. Sam went on to say,

“That was so much fun, so cool, it was great when I was testing out the car they wanted me to get a feel for it, and I was driving on the streets of Atlanta, with two cop cars one in front and one behind me that I felt like I was this bad ass dude.”

In my opinion, I think we can all say we would have felt the same way in a Maserati with escorts.

The conference gave us some insight into just how complicated filming time travel can be and a glimpse into how young actors step into these unknown roles to come together and create a film that will captivate you, while taking you on a wild ride into fixable pasts.

Check out some of the tweets from the event via @nukethefridge below!

Nuke The Fridge attending press junket for @AlmanacMovie look for it in theaters on January 30th. pic.twitter.com/iwLQOJp1dt