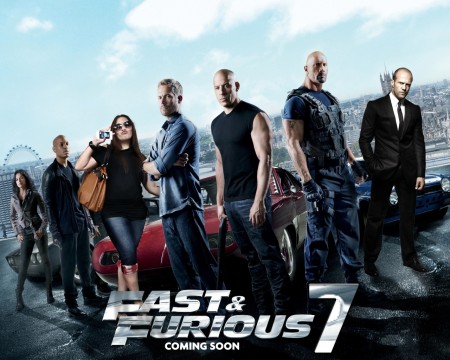 The Fast and Furious has been a franchise I’ve been watching since the beginning.   Starring Vin Diesel, Dwayne Johnson, Jason Statham and the late Paul Walker, the next installment, we are just two months away from experiencing this next film.  As the trailers begin to roll out, from the Super Bowl one we saw earlier this weekend, our interest is now piqued and we need more.  We must thank Universal for this one folks, another trailer has been released.  You can view it here:

Fast and Furious 7 is directed by James Wan who’s taken the reins from series veteran Justin Lin.  Both talented directors, this exciting film is sure to not skip a beat.  With the addition of Jason Statham and Kurt Russell, we now have more complexity to the film.

Based on scripts written by Chris Morgan, who has penned every film since the third installment, Tokyo Drift-Furious 7 picks up shortly after the last film.  As it turns out Deckard Shaw (Jason Statham) is not happy about the gang killing his brother Owen (Luke Evans) in Fast and Furious 6.  Shaw is looking for all out revenge on the crew, and will stop at nothing.

Fast and Furious 7 will be racing into theaters on April 3rd.