Hitman Agent 47 is an upcoming American thriller based of the widely popular video game Hitman.  The film starts Rupert Friend, Zachary Quinto, Hannah Ware, and Thomas Kretschmann.  While the video games have been around for many years, in this film we find our “Agent 47” is tasked with the job of finding the daughter of the creator of  “The Agent Program”  which somehow led to the creation of Agent 47.

This film has been in development for a few years.  In February 2013, the late Paul Walker was attached to play the lead Agent 47.  Unfortunately, we lost Walker in a car crash in late November 2013.  It wasn’t until January 2014 that Rupert Friend was cast for the role.

The Agent 47 trailer looks great, it is definitely looking like they are going to be showing us some great assassin sequences, witty wording and great filming.  If you like the Hitman video games, give this film a shot.  It releases in August 2015. 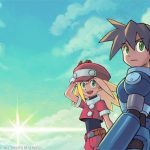 MIGHTY NO. 9 Gets Its English Voice Actors!

MIGHTY NO. 9 Gets Its English Voice Actors!