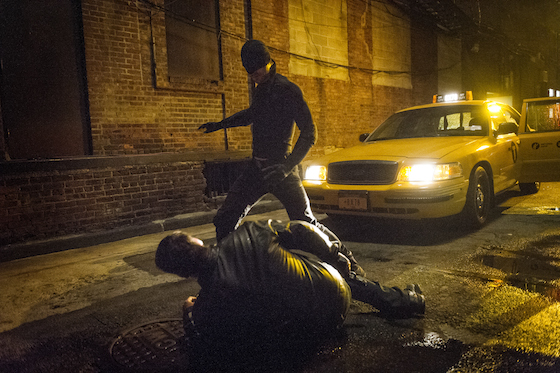 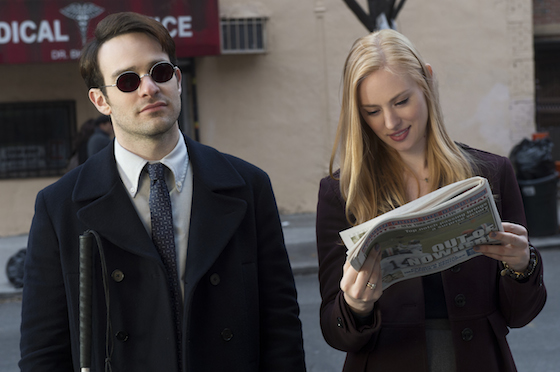 Charlie Cox stars as Matt Murdock in Netflix and Marvel’s highly anticipated TV series Daredevil. Last week, the cast of Daredevil spoke with reporters in Los Angeles and Nerd Report was there to meet the new Daredevil. You’ll be able to see all 13 episodes of Daredevil on Netflix this Friday, April 10.

Q: What was the creative challenge of this show, the fun part and the hard part? 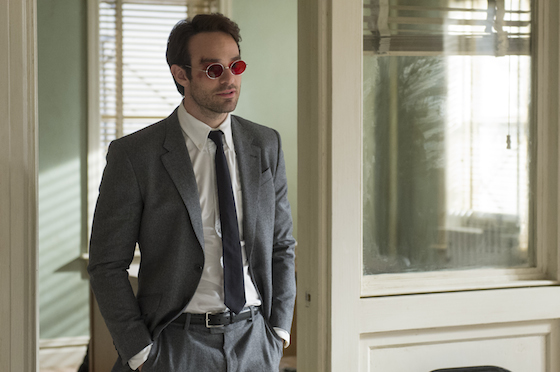 Charlie Cox: Oh God, it feels like it was manyfold. There are so many aspects to it. The obvious ones that jump to mind are the blindness and everything that comes with that. It was important to me that there was a real consistence around how Matt and Daredevil operate. For example, when Matt’s out in public, he has to maintain the illusion that he operates like a regular blind person. However, when he’s on his own or with people who know about him, he can operate better than a seeing person so he wouldn’t need his cane, he wouldn’t need to feel for things on the table, etc.

Finding out what that felt like and what that looked like was one challenge, and then there’s also the difficulty of the eyes themselves and what they do when he’s not wearing his mask or he’s not wearing his glasses. What are his eyes doing and what would that look like? I worked very closely with a wonderful gentleman called Joe Strechay who’s been legally blind for 20 years. I spent a lot of time working with him on my cane technique and household chores and things like that, but also I filmed him talking to me and filmed his eyes in particular and what they were doing. That whole area was one area that I concentrated on a lot.

There’s also the physical aspects of the role, the martial arts and the training. That, again, I just did as 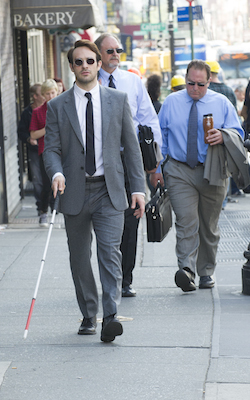 much of that as I could, as I was allowed to do. I really enjoy that aspect of filmmaking. I really relish the opportunity to do it. Fight sequences come to me quite quickly. I can pick them up relatively quickly so that was a bonus. The third thing worth mentioning is reading a ton of Daredevil comics.

Q: Were you a fan before this?

Charlie Cox: I was not, no. I didn’t grow up on comics and I read very few, and I hadn’t read any Daredevil comics. Which is a shame, I now know is a shame, but actually in some ways kind of served me quite well because the first anything Daredevil that I was subjected to were the first two scripts by Drew Goddard. So in a way it was quite helpful because I was then able to go away from having read them, read the comics starting from 1964 and work my way up. I was able to identify series or different artists or illustrators and writers that best suited the show that I read. As it were, I didn’t have too many preconceived ideas of who I thought the character should be or what the show should be like. I was able to just isolate the comics that best suited the show that I’d read and focus in on those.

Q: Did you enjoy playing the confidence of Matt Murdock?

Charlie Cox: The honest answer is I’m not sure how that quite came about. I think it’s very evident in the comics, in the panels. There’s often a lot of motion to Foggy. There’s a lot of motion to other characters and Matt’s often very, very still and very, very centered. So that was clear to me. The only other thing I was kind of aware of is this idea that there’s a sensory overload going on with Matt Murdock. He’s receiving so much information, and in a way, what that might do to a person is just keep them very centered and keep them very still as they intake it all. So it might be that that confidence is more of a byproduct of what he’s dealing with, how he’s living his life, what he’s feeling and sensing on a daily basis. I think there’s definitely something to be said for the kind of person who has command of a room, whether they can see the individuals in it or not. 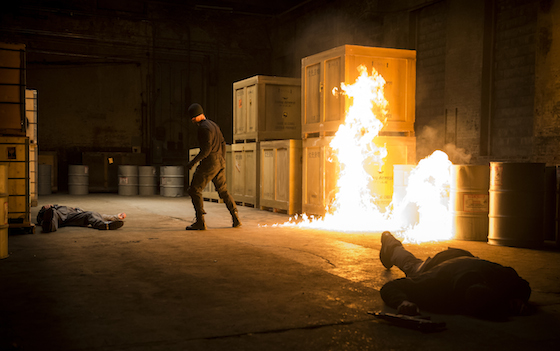 Charlie Cox: Oh wow, I so don’t want to answer that question. Rosario was saying something really, really interesting earlier. Really the mask that Matt Murdock puts on is when he doesn’t have his mask on, when he’s walking on the streets as a lawyer and maintaining this illusion that he would need a cane or that he would need to feel for things on the table to find them. So that’s an interesting example of what you’re asking. I think in our show, what we’re seeing is we’re seeing the evolution of Matt Murdock into Daredevil.

We’ve got these 13 episodes to plot that very, very slowly and carefully. I would say maybe it’s like a pendulum. It kind of swings because I think in some ways the Daredevil that we will come to know and love by the end of the show or seasons to come, or whatever it is, is who he is innately. That’s who he has always been since the accident. He will fully realize who he is as Daredevil, but at this point, at the beginning of the show, I think he’s still having to find his way with that. So it’s almost like it starts the other way around. It starts with Matt Murdock and the alter ego is Daredevil.

Q: Where do you think Matt’s trust in Claire comes from?

Charlie Cox: Well, I know she’s telling the truth. From the questions that I ask her immediately, she tells 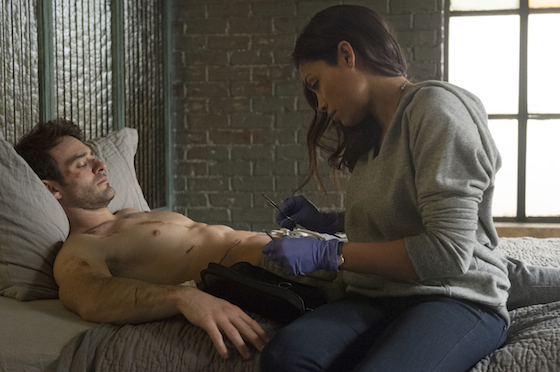 me who she is and she’s not lying. I can tell by the nature in which she talks to me that her intentions are strong and good. So it’s easy for me to trust.

Q: What was the most complicated fight scene?

Charlie Cox: So the way we did it is I worked very closely with the stunt coordinator and my stunt double. I would be able to break up the fight sequences into moves about six to 10 at a time that I could learn. So it really depends on how complicated those movements were, and of course the other actor. The great thing is we always found the time to rehearse and rehearse and rehearse, make sure it was a safe space, make sure that both actors or actor’s stunt double felt safe within the moves. It’s a bit like fast forwarding a tape. You start doing it in slow motion and you get quicker and quicker and quicker. When it all comes together, it’s a real collaborative process because it requires both performers and the lighting because you’re actually not hitting people and it’s looking like you are. So it’s not just about throwing a punch, it’s also about selling a punch and it’s also about a camera move, the camera angle covering it in a way that it looks like it’s a real hit to the face. 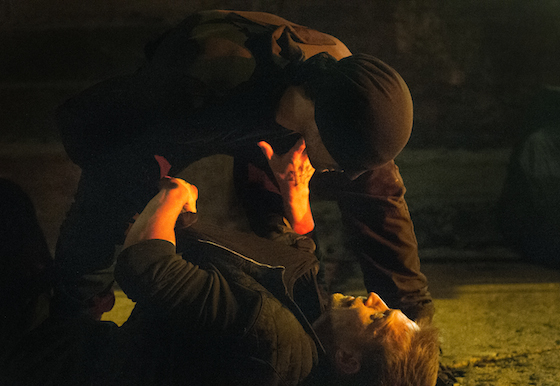 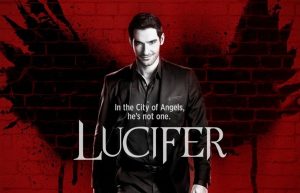 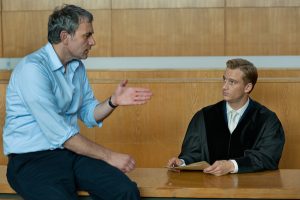 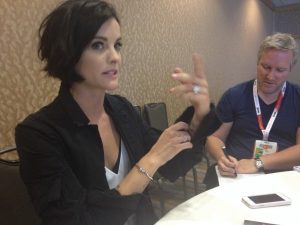 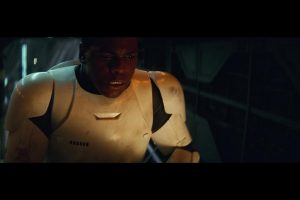 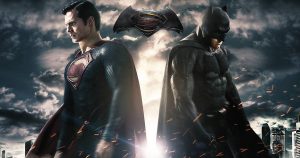