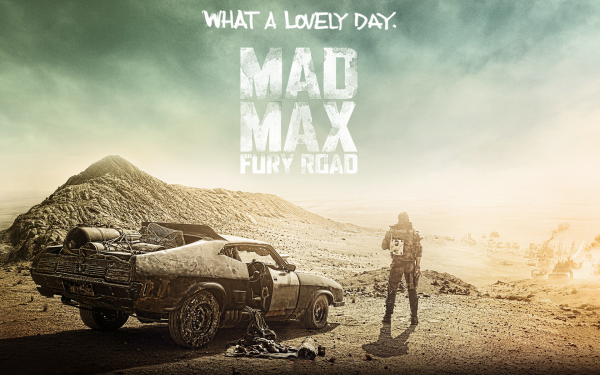 It certainly feels like there are 30 years’ worth of ideas in Fury Road, since that’s how long it’s been since we’ve seen Max Rockatansky (Tom Hardy). I’m glad they specified right in the opening titles that this is the same Max Rockatansky, not some ambiguous Max that could explain the recasting. Nope, same Max. He begins the film with long hair, so this could very well be an adventure that happened after he left Barter Town but before he found the kids in Thunderdome. That would have to mean he grew his hair again after this movie, so I don’t know.

The Mad Max films were always populated with wild characters, and the series can probably boast the best names for those characters. From Toecutter and Lord Humongous to Immortan Joe and the Organic Mechanic, these names are so evocative. Organic Mechanic, think about what that means. He’s applying machinery to biology, but stopping short of calling him a doctor.

George Miller talks about dreams and you can see their influence on the Mad Max films. In a way, there’s more dream logic than forward momentum, or at least an even mix, but Fury Road is like a heavy metal fever dream. Anything that is mobile has a place in this movie, including a steam shovel, although I guess there’s no tank. So I’m wrong. Anything mobile COULD be used, though the focus is more building on top of our vehicles than using every existing vehicle. All the crazy contraptions are functional though. When you see people swinging from car to car, you understand how it works and how useful it could be.

That dream logic makes me view all the Mad Max films as more abstract visions than driven narratives in which I am invested. I think that’s great. They should definitely exist and I want to see more of them, but it’s a different experience than a heroic story where I want to see how they get to the end. More than a dream, it’s like a big party, as evidenced by a character who’s entire function is to provide entertainment for the drivers. It’s clearer than any other action sequence, short of Spielberg, but that dreamy twist is what Miller’s been doing since The Road Warrior.

The characters are so rich that even the ones with few lines, you can tell who they are and what is special about them. Every gang leader has a unique perspective, and we ought to celebrate how Miller puts all different body types on the screen without comment. This is a rich world full of rituals and procedure too. We’ve seen Barter Town and survivor camps, but what they’ve got in the Citadel would be crazy if it weren’t so gleefully creative. It’s a celebration of the road, the way they all have personalized steering wheels and practically a mobile stage as part of their armada. Some of the most brilliant visions are only seen for one shot, and that’s how special the Mad Max world is. Even a cutaway is indicative of the world.

I’m not sure how I feel about the Max of this Mad Max. In a way he’s the most truthful to the legend because he’s so beaten up, he doesn’t have any ambition except maybe being somewhere better than the prison he’s taken to in the beginning. That’s a great antihero perspective but he’s so detached, there’s a sense of “why do we even care about this guy except he’s running from awesome tankers and masked badasses?” It is consistent with the series though. Max was always indifferent and reluctantly joined a different cause each film, it’s just pushed to a new extreme here.

Hardy is great at this, so great though that it makes me wonder if we still need to follow Max through this world anymore. It could just be the world of heavy metal masked vehicular warlords and the heroes who stand up to them, such as the gang of women whom Max sort of hijacks fills in the humanity of the movie. Furiosa (Charlize Theron) is awesome and her gang of rescued slaves successfully skirts that line of embodying lovely desert visions, but kicking your ass for ogling them too much.

The chases are brilliantly constructed with dramatic build, a sense of distance traversed, and well paced with pit stops (aka plot) in between. I do like how they use each thing once, and George Miller has personally decided which ones are the coolest because he put them in the finale. Don’t wan’t to blow your wad in the intro, but you’ve got some cool stuff to play with before your big toys. Each sequence introduces new types of vehicles with different physics, so the motorcycle chase involves a lot more acrobatic jumping, but that’s not the best one either. So why is it still not the fastest, most furious movie of the year? Family.