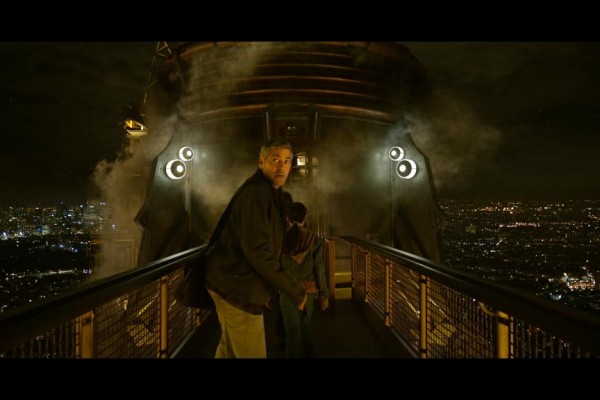 Tomorrowland is this year’s John Carter and The Lone Ranger, so many different, inconsistent things that you have to admire it’s ambition. The result is disjointed at best, misguided at worst. At a certain point, I’d say just give up, celebrate this magnificent mess and marvel that a studio actually let their saccharin corporate property become so warped.

But if you want to see anyone’s warped vision, you want to see Brad Bird’s. I think he was going for a mischievous tone, but it ends up just being mean. The violence committed on and by kids is ironic, but it’s not whimsical. It’s a kids movie with balls, but one without sense. I’m not worried about whether it’s appropriate for children, because I’m for anything. I’m questioning whether it was right for the story they were telling. This is analyzing without spoilers, but Tomorrowland is less like the ‘80s Amblin movies and more like an adult trying to be naughty who’s forgotten the innocence of a kid being naughty.

It has a good message, but it’s hypocrisy because the film celebrates exactly what it’s condemning. Tomorrowland itself is a misdirect. The movie is about something else. It’s like if Philip K. Dick wrote a kids movie, but the twist is that the movie doesn’t actually know what it’s about.

The laser projected IMAX looks great. Green screen, however, does not look good in IMAX. IMAX only exacerbates the disconnect between the actors and the backgrounds painted in later, although perhaps the IMAX screen is the actual size of a green screen on the set. Most of the IMAX we’ve seen has been practical, the Dark Knight movies and Mission: Impossible – Ghost Protocol. Although Guardians of the Galaxy did IMAX CGI, and then Interstellar made the visual effects gritty, so it can be done.

The action and visual effects are all things we’ve seen before, worlds like a planet in the Star Wars prequels and people flying around against green screen, detached from everything that is supposedly around them. There are some cool ideas in the background, but it would be cooler if they found a way to really build them. It gets to the point where a character crashes through something that wasn’t really there, but that doesn’t create texture. It’s just more detached artifice. The idea of parallel worlds plays out really well, so I wish that had been consistent throughout the movie.

To say there are things I liked and things I didn’t in Tomorrowland betrays the true visceral shock of tonal and narrative shifts. It has to open with a meta narration contradicting itself because otherwise you wouldn’t see George Clooney for an hour. At a certain point, the main characters are talking about things they said to each other offscreen. But hey, it only costs us a few bucks. That’s a fair price to see an A-list think tank exercise acted out with hundreds of millions of dollars.