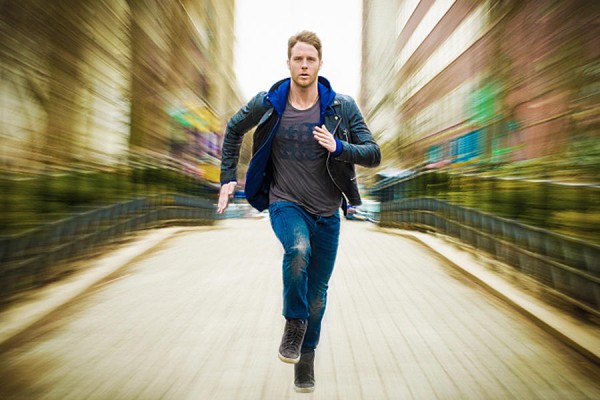 You know I’m Franchise Fred because I love sequels and believe that every movie should have sequels, indefinitely, no exceptions. But I’m equally interested in television picking up where a movie has left off. Buffy, the Vampire Slayer was a sequel to the movie, albeit recast. Highlander existed within continuity, and ultimately made a movie sequel transitioning the TV characters into the lead.

I’m sure Limitless won’t appreciate me comparing it to Highlander, but it is the same model where Bradley Cooper appears in the pilot as Eddie Morra, effectively passing the torch to the character we will follow every week. Jake McDorman stars in the series as Brian, a new character who swallows an NZT pill and becomes limitless. Limitless premieres this Fall on CBS but I got to speak with McDorman early at CBS’s Summer Soiree about the Limitless TV show.

Nerd Report: Is there a scene where Eddie Morra passes the reigns over to you?

Jake McDorman: Yes, and for really vague reasons. We don’t really know what that’s about. I play a 28-year-old loser who’s just stumbled onto this drug for the first time by happenstance, kinda like Bradley’s character in the movie did. But now all of a sudden this guy who is, in our show, running for president, the fact that he wants to have anything to do with me is beyond me. But yeah, that scene is real and it sets up Bradley’s character being this man behind the curtain.

Jake McDorman: Yup, we left off in the movie Limitless with him running for senator. He’s senator now and he wants to become the president.

Nerd Report: Is Brian’s discovery of NZT different than Eddie’s was?

Jake McDorman: Yeah, it’s very different. They’re two very different characters. Even though their origin stories are a little similar, they’re very, very different. Eddie Morra stumbled across such a large supply of the drug that he could do it for a long, long time. My character has a very, very limited supply and he’s only doing it to solve this one mystery and then never do it again. He kind of has this rude awakening that you do it once or twice, the side effects of the withdrawal are strong enough to even kill you.

Nerd Report: Withdrawal from NZT can kill you now?

Jake McDorman: Oh yeah. It happened in the movie. That’s why he had to keep taking it every day because the hangover can actually be fatal.

Nerd Report: The movie ended with Eddie going off NZT and keeping the powers. Is that not available to Brian?

Jake McDorman: No. Well, it’s an option. There’s a lotta options on the table but we’re gonna find out a lot about Eddie Morra that maybe you didn’t know by the end of the movie.

Nerd Report: Where does Brian’s stash of NZT come form?

Jake McDorman: I get my first pill from a buddy of mine that used to be in a band with me that has gone off to be an investment banker. I’m kind of this failed musician and we run into each other, he’s like, “You look terrible. Maybe I can give you something that’ll help.” After one experience with that, you want more.

Nerd Report: So how do you come on Eddie Morra’s radar?

Jake McDorman: Nobody knows. Nobody knows. I don’t know. Brian Finch doesn’t know. You’ve got the idea that this guy has a web of connections and is a very, very powerful man. How and why he taps Brian for anything is very ambiguous.

Nerd Report: So it’s not, “What you’re doing look familiar. I think I know what you’re up to.”

Jake McDorman: Oh no, it’s, “I know every single thing about you and you don’t know why and you won’t know why until I want you to know why?”

Nerd Report: Does NZT give Brian different powers than it gave Eddie?

Jake McDorman: I think it affects everybody the same. It just unlocks that individual’s full potential. If you remember in the movie, there was that Russian drug dealer who would take it and he obviously behaved very clever and very smart but very different than Bradley’s character. So I think personality will affect the high, will affect the drug but basically it unlocks your full potential and however you choose to utilize that, for good, for evil, for somewhere in between is up to the individual.

Nerd Report: Will Brian always use it for good or sometimes walk that line?

Jake McDorman: We’ll find out, man. I’ve done a few [in the pilot] but they were always for righteous intentions.

Nerd Report: Your last series was a comedy. Were you looking for something different after Manhattan Love Story?

Jake McDorman: Honestly, I really wasn’t looking for anything after Manhattan Love Story, especially anything on television. It was just after working hard on a show like Manhattan Love Story and then having it cancelled so quickly, it’s hard to get back on that horse. This project just kind of found me. I had a bunch of friends auditioning for it. I heard the gossip that it was one of the best scripts floating around this season and it wasn’t until the creatives, Marc [Webb] the director, everybody at Relativity and Craig and Bradley had said, “You know what? Let’s reach out to Jake.” It was because of them that I got the opportunity. And then of course I read the script, thought it was really exciting and it all came together.

Nerd Report: Do you feel like you’re on a little more solid ground with the connection to this hit movie?

Jake McDorman: I think if there’s any built in audience from the film and the story, that absolutely helps. Like I said, everybody involved has a really great reputation within the industry. Obviously Bradley Cooper does too and his enthusiasm, his involvement in this project I think really is kind of contagious.

Nerd Report: Would you be interested in the Limitless concept if it had been a straight reboot of the movie and not this sort of sequel?

Jake McDorman: I don’t think so. I don’t think so, no, because I love the concept. I love the moral dilemma of addiction but for a greater good because that’s what happens. You take this too many times, you are chemically addicted to it, so much so that it’ll kill you if you stop. I think that’s a really interesting world to play in, but I’m a big fan of the series Fargo. It’s amazing and what’s cool about it is they didn’t reboot the movie. It’s a 10 hour version. What the Coen Brothers could do in two hours, all they got to do is play. Noah Hawley’s a genius. That was a big part of it for me. I can’t really say honestly if I would or wouldn’t but I know that a continuation of the universe of the movie was a huge attractive quality of the show.

Nerd Report: Is it just as fun to play coming down from NZT as it is becoming limitless?

Jake McDorman: No, because you’re vomiting and feeling terrible. But I think there’s going to be some instance in there where you’re on the pill and you’re actually visibly coming off, so you’re still smart but you can’t articulate and I think that would be fun to play with. But the completely off withdrawal is sweaty, stomach ache, wincing in pain, vomiting in the toilet. That’s not as fun as being Sherlock Holmes.

Nerd Report: Sounds like you get physically into that.