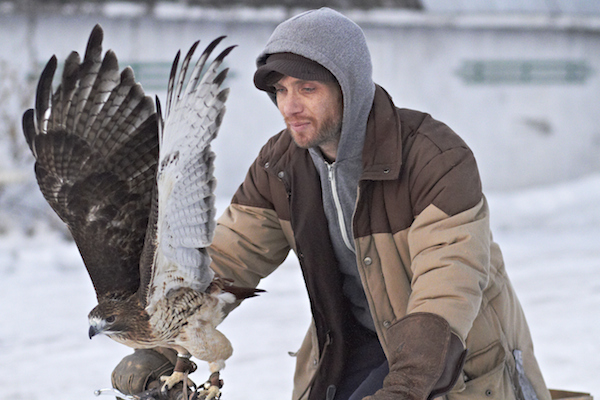 Aloft is the faith healing falconer with mommy issues movie of the year. I’m not saying it’s the best faith healing falconer with mommy issues movie ever, but it’s definitely top five. Sometimes when I do that bit it’s to celebrate a movie with an outrageously specific premise. Usually it’s to point out how inaccessible the film is, and unfortunately Aloft is the latter.

Nana (Jennifer Connelly) and her songs Ivan (Zen McGrath) and Gully (Winta McGrath) travel with a group to The Architect’s healing shack. The Architect only chooses one kid out of the whole bunch to heal anyway, and it’s not Gully. Ivan still ruins it for the chosen kid because his falcon tears through the thatch hut where the healing takes place. You see, Ivan is a budding young falconer, because of course he is.

I’m sorry to sound so dismissive. Surely this was written and brought to screen because at least one writer/director believes in the healing power of belief and the chaotic anarchy of nature. It is still incumbent on said filmmaker to make those images compelling to nonbelievers. There are plenty of brilliant movies about subjects we would otherwise never consider in real life.

The big thing is why the f*** do they have to bring their f***ing falcon on this trip? However bad Gully’s health is, however obscure and out of the way The Architect is, they couldn’t leave the God damn bird home for one weekend? We’re all sensitive when animals come into harm’s way, but let’s hold the pet owners responsible for bringing their animals into wildly inappropriate situations. I wouldn’t take my cat skydiving. Cats are for home, although now I’m picturing Tippi in a parachute. Yes, birds fly in the wild, but again: faith healing thatch hut.

Aloft jumps 20 years ahead to when Ivan is grown up (Cillian Murphy) with a family of his own and no relationship with his mother, but still a falconer. When reporter Jannia Ressmore (Melanie Laurent) pressures him to help her set up a meeting with Nana, Ivan grudgingly obliges as we intercut past and present to learn what really drove them apart after the falcon incident.

We are introduced to some of Ivan’s fears, then illuminated on what caused those fears via flashback. We learn more about Nana and only then do Jannia’s true intentions come to light. That’s volatile when it’s August Osage County, and it’s a dysfunctional family that can bear a few shocking twists in an otherwise relatable context. Aloft expects us to know birds and holistic healing techniques intuitively by sight.

While there’s merit to not spoon feeding and holding the audience’s hands, these are pretty niche topics. Some effort should have been made to make them more universally identifiable.  Or at least make them seem awesome. If falconing were presented as a majestic practice, we’d totally be on Ivan’s side. It’s only taken for granted as something he does and should do because why are you questioning Ivan, Fred?