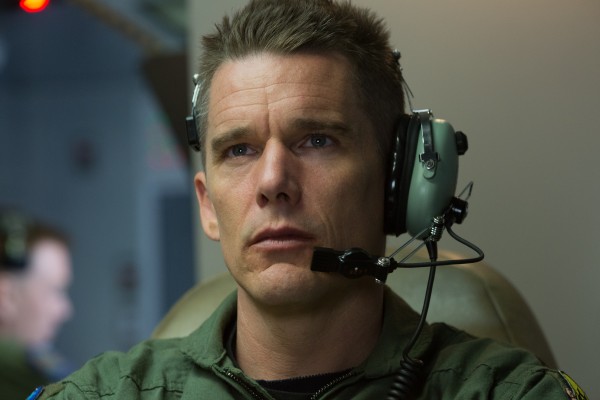 Drone pilots have been a controversial issue in contemporary military discussions. Never one to shy away from topical issues in films, writer/director Andrew Niccol has made a movie about them. Good Kill stars Ethan Hawke as Major Thomas Egan, a pilot who’s now assigned to control drones remotely from a Nevada facility.

Egan faces a lot of moral dilemmas, ordered to launch strikes when innocents are in the way, and forbidden from striking when crimes are being committed. Niccol asked similar questions of the media in The Truman Show, technology in S1m0ne and time itself in In Time. I got to speak with Niccol by phone about Good Kill and his career. Good Kill is now in theaters and available on VOD.

Nerd Report: Is there a Rear Window element to these drone pilots in that they can watch, but they have very limited options? They can’t stop one rapist. They can either blow up everyone or do nothing.

Andrew Niccol: Yeah, very much so. The drone pilots that I spoke to said that they would witness atrocities like the ones portrayed in the movie, and because it was not part of their mission, they couldn’t do anything about it. Even though they wanted to act, they couldn’t. So it’s an interesting thing about it, as you point out. There’s an omnipotence and yet there’s also an impotence to their work.

Nerd Report: But they don’t have the capabilities to be surgical and just kill one person.

Andrew Niccol: No, in fact what we’ve had to do was come up with some language to get around it. We’ve invented a word called “proportionality” which isn’t a very pretty word. What it basically means is that I’m such a bad guy and it’s so important to kill me that it’s okay to kill anybody around me as well. They had to come up with a whole new lexicon of words that would have Orwell spinning in his grave.

Nerd Report: Is that a word the military actually uses?

Andrew Niccol: Proportionality? Absolutely. They also use “neutralizing a threat,” “prosecuting a target.” They need to distance soldiers from what they’re doing but it basically means killing people. But we avoid saying that.

Nerd Report: I haven’t heard “proportionality” in the news so they’ve kept that pretty well hidden.

Andrew Niccol: Well, if you go to the search engine of your choice, you will find out all of it. There’s also the word “imminent” which is fascinating as well. Are you plotting to kill me in an hour or in a year? It depends on your definition.

Nerd Report: I feel the argument we always hear is a drone pilot can’t make the same judgment call as a person on the ground, but is it really that the drone pilots have limited vision too? They can’t see if kids are entering the frame. The discussion assumes it’s all equal except proximity.

Andrew Niccol: Right, on the one hand they’re actually more precise because we’re not carpet bombing anymore. So it is the most precise weapon we have, but as was demonstrated by the two hostages who were killed recently, we can precisely kill the wrong people. Special Forces would argue that hey, we could’ve kicked down that door and seen who was inside, but your drone can’t see through walls and the roof. So we are also willing to put up with a certain amount of collateral damage.

Nerd Report: Are the pilots as frustrated as Ethan Hawke’s character because they got in this to fly planes?

Andrew Niccol: Right, there’s going to be less and less of those guys, but sure. He became top gun and now he’s ripped out of that cockpit. And he’s being asked to do something they’ve never asked any pilot to ever do which is to drop your ordinance and then watch the damage that you caused, and they call it damage assessment. But it’s called counting the dead really.

Andrew Niccol: They have to be in the theater of operation because they have to have line of sight, because these things are actually very difficult to take off and land. Once they’re up in the air, then they hand it off and they’re thrown via satellite from places like the base near Las Vegas.

Nerd Report: Do you know which games specifically?

Andrew Niccol: I don’t know which specific game it is but they did use it because those were the best tools for operating remotely. They just converted them for military use. It was either Playstation or Xbox.

Nerd Report: Is TARFU what they say instead of FUBAR now?

Andrew Niccol: [Laughs] I think they say both. I’ve heard FUBAR so often.

Nerd Report: As someone who’s written about technology, do you have any conspiracy theories about VOD movies?

Andrew Niccol: No, I don’t. It’s my first experience. I’m a virgin but I think it’s the way it’s going. It’s interesting in a way because we’re dealing with a movie that deals with technology, and that’s where movie distribution is also going.

Nerd Report: I’ve always wondered about The Truman Show, did you ever think about a movie about what Truman’s life might be like in the real world that he’d never experienced growing up? I know the point is we don’t get to watch him after he escapes, but did you ever think about how difficult his life might be coping in a world that’s not designed around him by producers?

Andrew Niccol: That’s a good question. I’ve always kind of wondered what happened to him but your guess is as good as mine.

Nerd Report: You wondered too? You stopped right when he escapes.

Andrew Niccol: Right, as soon as he walks through the sky, then it’s up to the imagination what happens to him. Of course, the audience probably just clamored for another Truman. Or a Trudy.

Nerd Report: I once interviewed Noah Emmerich and he pointed out that the one thing you didn’t anticipate is that people would actually want to be part of The Truman Show, which is where reality TV is now. Has that surprised you, that people want to be followed by cameras?

Nerd Report: Yes, as a film and television critic I’m well aware of it. The technical term for it is “unscripted television.”

Andrew Niccol: [Laughs] Yeah, it amazes me that it’s called reality television because Truman is the only true reality star.

Nerd Report: One of your less talked about movies, S1m0ne has gotten a lot closer to reality. What do you think about the use of digital actors?

Andrew Niccol: Yeah, it’s true. I think the movie just came out that touched on it, Ex Machina. I can see that the desire for the ability to control is somewhat prevalent.

Nerd Report: Ex Machina was a robot, but we’ve had like Furious 7 had to create their actor who passed away, and lots of actors in superhero movies are scanned for things you can’t actually have a stuntman do.

Andrew Niccol: Right, and I do it very often myself. I have digital extras very often so it’s become part of my own life.

Nerd Report: My favorite part of your adaptation of The Host was something I believe you added yourself, which was Store. Was Store your invention?

Andrew Niccol: Yes, what I realized was that there would be no brands because there is really no commerce and no competition in Stephenie Meyer’s world.

Nerd Report: Have you ever thought about opening an actual location for Store?

Andrew Niccol: I guess it’s just generic brands but what I like is, of course, no money’s exchanged.