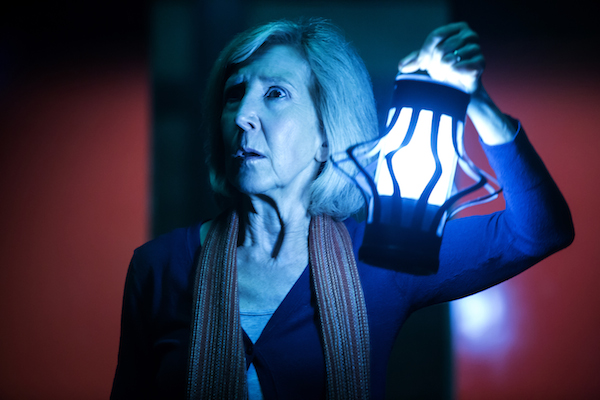 Lin Shaye has become the throughline of the Insidious films. The first two focused on the Lambert family, whom Elise (Shaye) was helping free their son from the Further. Though Insidious: Chapter 2 left Elise in the afterlife, Chapter 3 goes back to before she ever met the Lamberts. This is the first case that made her a warrior of The Further.

I met Shaye just after Mother’s Day, the day on which Wizard World awarded her Godmother of Horror. She took the honor in stride and looked ahead to where we might see Elise further in The Further. Insidious: Chapter 3 opens Friday, June 5.

Nerd Report: Isn’t it about time?

Lin Shaye: It’s totally fun. I don’t know. I don’t really think about time that much to be honest. It’s more just what’s happening next and I’m very grateful that people are happy to see me. What can I say?

Nerd Report: You had a great cameo in Nightmare on Elm Street but was it the Insidious movies that really made you the go to casting for horror?

Lin Shaye: You know, I don’t know because Nightmare on Elm Street was a long time ago. I was a little babe. When I look at those pictures I go, “Who is that?” I was like a baby. To be real honest, those early movies, I was in Critters 1 and 2. Those were all New Line Cinema which was my brother Bob Shaye. He basically said, “Put my sister in that movie.” That’s the truth. I was a young struggling actress trying to get a part here, get a part there. When Bob started his company, he presented an opportunity to me and I’m grateful to say I was able to turn opportunity into gold in a way. I did a good job. I was able to finally show that I was a good actress. I could turn something into something else.

So I don’t know. All the Farrelly Brothers comedies came after that and Detroit Rock City, and tons of independent things, wonderful films I’ve had an opportunity to do that were not genre films at all. Just drama, comedy, some were a little scary. There’s a movie called Dead End I did some years ago with Ray Wise that became a real cult favorite that is a little horror film. So over time, you do a little bit of this, a little bit of that. Comedy was always my go-to thing in a way because I am funny. I know I’m funny. I enjoy humor. I enjoy looking at life through, not rose colored glasses, but clown colored glasses because we’re all such clowns basically.

I think the roles in Insidious, Elise, you could put her in any movie when you think about it. You could put her anywhere. She’s not necessarily a horror character. She’s just a character. She’s just a woman with a gift is the way I look at her. Mostly I’m just grateful that people are receiving, I hope, my gift which is interpretation and being able to enter another person’s thought process and shoes. It’s so much fun to do and it’s a real puzzle. Whatever has worked in the Insidious films which are beautiful films, I think all three of them and this one in particular is gorgeous in terms of my character. Leigh has really filled her in and you learn so much about what makes her tick, which is also really fabulous for an actress to be able to sink their teeth into. I’m happy and I’m really full of gratitude to fans.

Nerd: Is Chapter 3 where we see Elise at her most heroic?

Lin Shaye: I don’t know yet. Who knows if there’s a four? To date maybe her most heroic because we see her be somewhat heroic in the second one, but that’s in The Further. This is also, without giving too much away to the fans who I hope will enjoy it, but yeah, she stands up for what she thinks is right. She’s definitely a warrior.

Nerd: Is it also her most vulnerable because she’s not comfortable with her gift yet?

Lin Shaye: That’s true, she’s not, that’s right. It’s been diminished because of her situation. I love that you meet her at such a dark and vulnerable place. I feel like this is skillful storytelling from Leigh Whannell as well that what brings us together is grief and loss, that all three of us, Quinn and her dad, we’ve all experienced loss and grief. I think on some levels, and that’s what draws me out because I relate to them and their situation, and I think the fact that the story supports this emotionality, I think people are going to be surprised how touched they are by it. I was surprised how moving it is. What’s I think going to catch people off guard is whether you’re 13 or you’re 90, we’ve all experienced loss on some level. To relate to these people in such an exciting way, I think they’re going to be scared in ways they don’t expect and they’re going to be grateful in ways they don’t expect.

Nerd: When the scary things jump out at us, how do you play it as a surprise each time when you’ve rehearsed it and you know what’s coming?

Lin Shaye: It’s acting. There’s all kinds of tricks to make yourself keep something fresh. When you think about it, you’re really doing the same thing over and over and over, and there are tricks, things you could trick yourself into, focus you can put your focus on so something else still scares you. There’s a great story Dustin Hoffman used to tell about when he was doing Marathon Man. He was running to be out of breath, running up and down stairs and Olivier looked at him and said, “Why don’t you try acting?” It’s kind of true. You don’t always have to put yourself through every physical element to get the result. Some of it you do. It depends on what makes you feel comfortable as an actor too. I’ll do physical stuff to make myself get to a certain place sometimes, and sometimes I can just pretend in the story.

Nerd: Do you do physical things on the Insidious movies?

Lin Shaye: Yes, sometimes, yes, but I won’t tell you what they are. Those are my secrets. Those are the secrets of the trade.

Nerd: Has anything you learned about Elise in Chapter 3 changed your impressions of her in the first film?

Lin Shaye: No, and kind of what Leigh skillfully did as well is he kind of took what we had already laid down, what we’d already created and he kind of rewound the film a little bit in his head  of how do we get to that place. It’s kind of like when you shoot a film and you shoot the last scene first. You have to inform everything you put before it to get to there. So I honestly think it wouldn’t have changed, but what we did in the first one completely informs what we do in the third one.

Nerd: The second movie ended with Elise meeting some new ghosts. Do you ever think about what happens there?

Lin Shaye: That’s up to Leigh Whannell. I know what I saw there but that’s up to him.