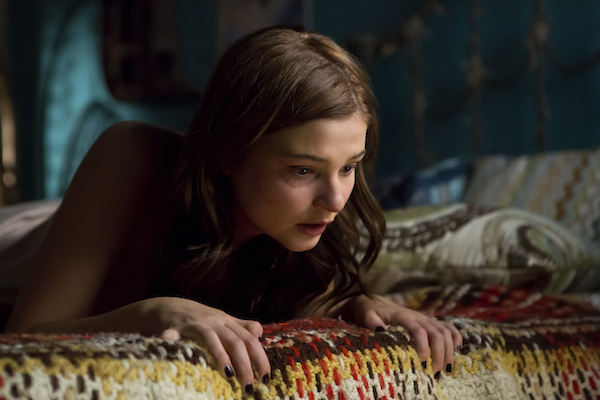 In beginning a new chapter of the saga, Insidious: Chapter 3 introduces a new family dealing with spirits from The Further. Stefanie Scott plays Quinn, a teenager who has lost her mother and tries to contact her spirit. When something else answers back, she and her father (Dermot Mulronet) have to call in Elise (Lin Shaye) to help them.

Nerd Report: What was your journey from A.N.T. Farm to Insidious and Jem?

Stefanie Scott: I think the journey is just as easy as that was my high school and I graduated. Now I get to do all the projects that I’m really passionate about and to tell stories about authentic people. That’s what I love. It wasn’t as much of a journey or trying to break free. It just had to do with me doing more of what I love.

Nerd Report: Did you go to a regular high school while you were acting?

Stefanie Scott: Yeah, I just did home school so I had a tutor on set.

Nerd Report: Are you planning to continue school, maybe go to college?

Stefanie Scott: You know, yeah. Right now I’m working and I’m really steady with work. I have a bunch films lined up for the rest of the summer and this is what I want do, so I really don’t want to take a break from it if I’m living my passion really. So at the moment I’m still working. I’m not sure if I plan on college. If anything, I’d like to go to film school one day because I love writing and I want to direct when I’m older. But I also feel like I learn so much just being in it and learning from people around me, more than in a classroom.

Nerd Report: Did you talk to Leigh Whannell about screenwriting?

Stefanie Scott: Yeah, yeah. I was with him 24/7 on this film, always next to his director chair, watching him set up shots, anything. He would talk to me too a lot about writing. I feel like I did learn a lot from him so yeah, I would love to work with him again one day.

Nerd Report: What was one piece of advice he gave you that you might use when you write your own screenplays?

Stefanie Scott: I don’t know if it’s as much advice or just thinks that you’ve absorbed after working with someone for so long and I think I could go to him for advice with anything. I think one thing, it has more to do with horror films, but he told me when you’re writing a villain to make him as mysterious as possible. You can see that in Insidious where our villain never speaks. He just breathes. I think the less you know about him, the more terrifying he is.

Nerd Report: We do know a lot about Quinn though, don’t we?

Stefanie Scott: You do know a lot about Quinn. It opens up her mom has just died and she’s broken hearted. She’s going through such a rough time in her life by herself, applying to college and living just as a 17-year-old does and all the changes that you go through. So she reaches out trying to talk to her wherever she may be, not knowing what’s on the other side. She gets in an accident involving her bringing an entity back.

Nerd Report: I don’t know what you may have gone through in your life, but how did you relate to Quinn’s loss and grief?

Stefanie Scott: Well, everybody knows loss one way or another. I certainly have in personal ways. I think that that’s what I really brought to Quinn is I did use some personal losses in my life. But I think the most important thing was to make sure she was just present and in the now rather than trying to play somebody who’s lost anybody, but just to be there in that moment.

Nerd Report: Were those hard days on set when you were going to a really personal place?

Stefanie Scott: I think that they were hard days but what was so great about this shoot was that Leigh really had such an amazing environment. You’d go from shooting a really intense scene to being able to let loose and be happy and to talk. That’s what I had so much fun on the set about was that I had the emotional places where I just let it all out, but then I would be able to go straight back to being me and being happy.

Nerd Report: When James Wan played the theater director, did you talk to him at all about the Insidious series he created?

Stefanie Scott: You know, we didn’t talk too much about it. We both talk about the movie so much that it’s kind of nice to talk about other things. It was really hard to shoot that scene because he was so funny. He had all these lines he had to say and he didn’t know any of them. He was trying to improvise them out and he kept giving the wrong cue. I had to be straight faced. It was so hard. It was really funny.

Nerd Report: An acting school is different than auditioning for a part because it’s not one specific role. It’s trying to get into the entire school. Have you ever done anything like that?

Stefanie Scott: I’ve never auditioned for an acting school before. It’s been mostly just work stuff. I think the advice for that is just to stop trying to impress everybody else. You just have to go int there 100 percent comfortable with yourself and I think that’s what people are drawn to.

Nerd Report: How did you do the broken legs cast scene?

Stefanie Scott: That was really hard. I had half breakaway casts so I just really had to keep kicking the bed until they fell off. It was really hard because I had to keep myself looking just lifeless while I’m trying so hard to make them break and also not breaking my own leg.

Nerd Report: Was there any prosthetic on your legs or did you just bend a certain way to act like they were broken?

Stefanie Scott: Yeah, that was me just bending around.

Nerd Report: Did you practice that walk different ways?

Stefanie Scott: No, it was more like in the moment, I was just standing there and I was walking. He’s like, “Wait, stop. Just walk crazy real quick.” We did it a couple times and that was that.

Nerd Report: Did you get Jem and the Holograms and Insidious: Chapter 3, one because of the other because of your connection to Blumhouse?

Stefanie Scott: I actually did Jem and the Holograms first. I auditioned for this the week after I wrapped Jem and the Holograms. I had gotten the script while I was still on set shooting that. Kind of funny how that worked out. They’re polar opposite films. They had been auditioning for Insidious for a while but I was busy on Jem working 15 hour days so I never had a chance to go in. I’m pretty sure I was at the last second brought in after they had been auditioning for a really long time. I met with Leigh once and I did the script for him. Then he had me come back in one more time and do a possession scene. I was at the mall and I got a call from my agent that said, “You need to go to Blumhouse right now. Leigh wants to talk to you.” I was like, “Oh my God, I want this part.” I went and just hung out. We just talked about ghosts and life and what we believe is on the other side, and my similarities with Quinn. After that I got a call that I got it.

Stefanie Scott: I think that people are going to be really surprised when they see the film. You can’t show everything in the trailer and there are definitely some surprises. That’s why you have to see the movie to see how it does connect with each one. If anything, I’m just grateful that there are so many people so passionate about the movie. That’s what’s so cool is how many fans are so excited about it and how this show means so much because it was their childhood. So I’m excited for another generation to grow up on Jem too. I definitely have to say, this is the beginning. You can’t have everything all happen in one film, so it really starts out this is how we became Jem and the Holograms and that’s where it really begins.

Nerd Report: I’m glad it’s only the beginning, but it does make sense to just focus on the story of how this band becomes a huge success.

Stefanie Scott: Yeah, I think it’s really important to start it that way. That way people can grow up with it and connect with it so if we do go do more, then you can see the journey that they go on rather than starting in the middle.

Nerd Report: You had sung before. Was Jem and the Holograms a completely different style of singing?

Stefanie Scott: No, I grew up on music and doing theater. I want to do Broadway one day so music’s a big part of me and we had to sing for every audition. I think we all auditioned five times for the movie so it was a really big part of the filming. We would have 17 hours in a recording studio. It was amazing, I had so much fun.

Nerd Report: You couldn’t have grown up on the Jem cartoon though, did you?

Stefanie Scott: I was too young for it. I was born in ’96 so I wasn’t around when it was on but through the process of auditioning, we learned about the show. We were watching it because they have it on Netflix so we would all watch it.