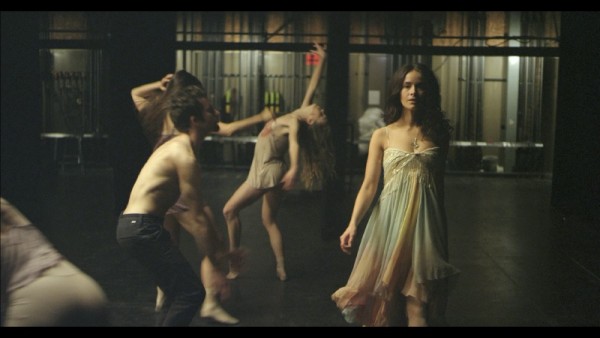 The Los Angeles Film Festival premiered A Beautiful Now, a film directed by Daniela Amavia, who’s worked as an actor since 1988. The film stars Abigail Spencer as a ballerina who locks herself in her bathroom seeing visions of people from her past, while her friends confront each other while waiting in her apartment to make sure she’s okay.

I got to speak with Amavia at LAFF about A Beautiful Now and her path to directing films. It turned out we had a few things in common, including an obsession with the history of Los Angeles.

Nerd Report: Did you write all of the biographies of the characters and then the screenplay revealing those backstories?

Daniela Amavia: Yes, I did. The structure of the film is actually quite complicated and I spent a long time basically building the framework for the film. Then I sat down and created all these characters based on real people but obviously changed a lot. And wrote their biographies and tried to weave it all together so it became a tapestry.

Nerd Report: So these are in some way people you know?

Daniela Amavia: [Laughs] Yes, they are in some way, yes. Also a lot of them are things that I have experienced but that I have put in different characters. But it’s all dramatized or magnified to tell the story.

Nerd Report: Was continuity a challenge, who was in the bathroom at what time?

Daniela Amavia: Yes, it was. I actually had to give the whole crew a minute by minute breakdown on where we were at in the story. So everybody could keep straight where we were going as we were jumping in time and memories and into the past. It’s quite intense to figure that out for everybody but I think we did. It was a challenge and I loved it.

Nerd Report: Are you a dancer yourself?

Daniela Amavia: I’m one of the horrible people that really wanted to be a dancer but didn’t make it. I just grew to 5’11” when I was 12 so that right there ended any kind of dream I ever had of being a dancer. But I’ve remained a fan of that all my life. I keep watching any kind of dance now and I’m very inspired by it. That’s why it’s in the film.

Nerd Report: Did you do all the dance scenes on that stage in one or two days?

Daniela Amavia: In one day. Poor Abigail, she is just amazing. Yes, we had one day to shoot this and it was incredibly, incredibly hard to do. The whole film, we didn’t have much time so we had to make it work. That was one of those make it work moments as Tim Gunn would say. We shot nine dance numbers that day so the D.P. and everybody just worked incredibly hard to make that day and make it as good as he could.

Daniela Amavia: Yes, Andrea Schermoly who is in the film also as a dancer, she is the choreographer. She’s the tall stunning blonde that you also see dancing. She choreographed it. She is a fantastic dancer. I think she worked in the New York City Ballet before. She’s just so talented and she’s starting to branch out as a choreographer.

Nerd Report: How did you cast Abigail and find the rest of the cast?

Daniela Amavia: Abigail I was shown actually her reel and in the reel she’s dancing. I was just blown away by her. It’s one thing, she’s a talented actress but there’s also a mystery to her that I just loved and loved for this character especially. So when we met, it was an instant love affair. She sat down next to me and I think we didn’t even speak the first five minutes. We were just sitting there staring at each other. It was sort of like a blind date. From that moment on, I knew that she was Romy, which is kind of creepy and weird because I’ve always imagined Romy, and there she was sitting next to me. It was kind of magical. I also remembered, I don’t know the filmmaker who said it, but making a film is 80% finding the right cast because once you have them, everything goes on its merry way. That was so true here. There rest of them is a mix between some came and auditioned. Some I stalked like Colette Wolfe. I’d seen Collette’s work and I was just pushing everybody to get her the script because I really, really wanted her for Ella and we finally got it to her, she read it and said yes. It was wonderful. Cheyenne was a meeting we set up. He sat across from me, looked down at my feet and said, “Really? You’re wearing white socks?” And I was and I had to laugh because that was such a David thing to say. So it all fell into place. Everybody kind of showed up when I needed them. It was really crazy. They all came together in the film like friends to me from the beginning. They had never met each other, so having them all come together and actually feel like they have a history was very magical to me.

Nerd Report: Is the film as personal as we might imagine it is?

Daniela Amavia: Yes. Is that a long enough answer? Yes, there is a lot in it that’s personal and that I wanted to discuss and put into a really fun and interesting story.

Nerd Report: What was your path to becoming a writer director?

Daniela Amavia: I always wanted to tell stories. I studied American Literature and drama in Germany. I was always going in this direction and I think I got almost sidetracked into acting. Then when I was working as an actor, I found myself loitering and annoying people. I was watching monitors and watching how things were being set up. I always wanted to do this. Then I finally sat down and I wrote this script. I wrote it eight years ago, almost nine years go, the first draft. It was kind of a strange experience because I think I’d researched it for years but I wrote it in three weeks. It hasn’t changed that much from that first draft. It just took a long time to put it together and here we are. This is my dream and I’m going to keep doing this.

Nerd Report: Given this is such a personal story, do you have ambitions to tell purely narrative stories?

Daniela Amavia: Yes, I have three scripts I have written that are ready to go. One is based on Alice in Wonderland and one is about these boys in Humbolt County that grow weed and what happens to them. One of them wants to break out of that scene, so they’ve very much not about me but in the end I feel like any film you make is always on some level about you because you have to find what you connect to in the film. Otherwise it feels maybe dishonest. So I think it doesn’t have to be that it’s based on your life but it has to be personal and you have to find a personal connection. Otherwise I don’t think you can tell the story. I think whatever I do, it will always be personal even if it’s not about people I know.

Nerd Report: How is your Now right now?

Daniela Amavia: Now? Insane. I live in Los Angeles now which I have been for the last eight years. I’m just finding my way and just really enjoying everything that’s happening because I love America. I’ve always been inspired by Los Angeles. Most Europeans are even though it’s maybe not the real Los Angeles. It’s the Los Angeles they see in films. So being here now, I’m giddy. I feel lit’s quite a beautiful now for me.

Nerd Report: I’ve lived here 16 years and it felt like home as soon as I got here. How did you adjust?

Daniela Amavia: Did you also have the thing that you kind of felt like you had already been here because you’d seen it in films?

Nerd Report: That’s interesting. I think maybe seeing it in films made it feel more like I’d been yearning to get here.

Daniela Amavia: That’s what I felt too. I had never been here so I landed here and looked around and felt like I did see it before. Films have such power over us and when you grow up watching a city on film, you think you know it.

Nerd Report: I’ve started noticing in older films what L.A. used to look like before I got here, because it’s changed so much.

Daniela Amavia: Yeah, but I feel like that dream-like state hasn’t really changed. It feels like it’s still a city that’s in flux and changing. There’s something dream-like about the city. I don’t know how else to say that because I’ve never felt that in any other city.

Nerd Report: You’re right, no matter what era the film, you still know it’s Hollywood. I just get a little nostalgics for the parts that were gone before I got here.

Daniela Amavia: But you can visit them. You just have to watch the movie.

Nerd Report: Exactly. I get obsessive about finding pictures of places that were here before I moved to L.A.

Daniela Amavia: Mm-hmm. There’s this amazing book. I think they’re called Los Angeles Then and Now. You can see pictures of Sunset Blvd. at one corner in the ‘20s and now. It’s fascinating.

Nerd Report: I have to look for that. Do they do other cities besides Los Angeles?

Daniela Amavia: I don’t know. They might, but I’ve seen this Los Angeles book around a lot so I’m sure you can find it.