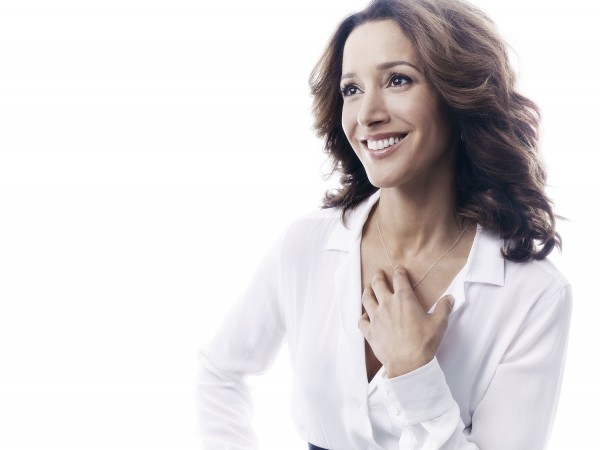 When I told Jennifer Beals I was a writer for The Nerd Report, she confessed, “I’m a wannabe nerd.” We were at a party for the premiere of her new TNT drama Proof, and I had a chance to speak with her. Proof premieres tonight at 10PM on TNT and airs Tuesday nights.

Beals plays Dr. Carolyn Tyler, a surgeon hired by a dying billionaire (Matthew Modine) to find proof of life after death. She meets a little girl in the pilot who has some convincing evidence so we can imagine who else she might treat each week. Beals shared the nerdy details of her medical research with us, and indulged me as I geeked out a little over my favorite Jennifer Beals movie.

Nerd Report: Is this the first role where you played a doctor?

Jennifer Beals: Yes, I think lots of lawyers but not a doctor.

Nerd Report: It’s something a lot of actors play, especially on television, but is it a very different breed of professional?

Jennifer Beals: Well, I love the science and as an actor, I love learning as much as I can before I start shooting or during shooting. We had an amazing cardiothoracic surgeon come in he taught me how to do sutures, one handed sutures. He was explaining how you have to make sure there’s an economy of movement because time is of the essence. You can’t waste time even just using two hands. When you do it with one hand, it’s literally you put your finger underneath like that and you pull it out because time is of the essence and you need every little moment.

Nerd Report: Are we going to see that on screen in an episode?

Jennifer Beals: I think so. I don’t know how they’ll edit it together, but it got to the point where I would be up watching YouTube videos just even about how to listen to the heart correctly. There are different points where you listen to the heart and when you see the stethoscope, there’s the diaphragm which is the wider part and then there’s the bell, which is the part that scoops up like that. The bell is used primarily for lower tones, so you can hear things that you wouldn’t be able to hear necessarily with the diaphragm. It was fun, so I became a little bit of a nerd watching all the different nurses show how to listen to the heart properly.

Nerd Report: The premise of the show is fascinating, looking for proof of an afterlife, but no matter how long the show runs, can you really come down on either side on the show?

Jennifer Beals: Well, I don’t know. That’s Rob Bragin’s job. That’s not my job but it’s not even looking for proof of an afterlife. It’s looking for proof either way. I think that’s what differentiates this show from other shows that might look at the topic of the afterlife is that you’re also looking at it from the eyes of a skeptic who’s giving the theories that it’s a hallucination, who’s giving the theories that it’s a synaptic event in the brain in the moments just before death. So I think it could fall either way, and there’s moments in the show. It’s not all oh, feel good, feel good, feel good, ghost. It’s not that. It’s not that show.

Nerd Report: Do a lot of scenes happen in the hedge maze?

Jennifer Beals: There’s a few. I love the maze. The maze is really fun.

Nerd Report: Was it as difficult a maze as it appears on the show?

Nerd Report: Is it liberating to play a character who has no hesitation to say exactly what she means?

Jennifer Beals: Yes. I love it because it’s usually how I am. Not to her degree but it’s really fun. It’s really fun to say what’s on your mind.

Nerd Report: The pilot uses the story of this little girl. Who are some of the other patients Dr. Tyler meets?

Jennifer Beals: Oh, I can’t tell you that. All I can say is I just finished shooting the finale and my mind is just astonished at how far we’ve come. When I watch the pilot and I see the beginning, and I see all the seeds that are planted in that space of time and how they flower in the end, it’s extraordinary to me.

Nerd Report: So it all pays off?

Nerd Report: Ideally, would you like to be involved in another long running series?

Jennifer Beals: Oh, I’d love it.  This series. I said to Rob, “I’m not done yet. Just write 10 more.” Because I didn’t feel tired. I felt really engaged and excited, honored to be part of it and wanted to just keep going. Every day is excitement to go to work because what’s going to happen? We get to talk about life after death all day long and have these kinds of conversations. Is there or isn’t there? If so, then why? If not, then why? What evidence do you have for it? We would share articles, Caroline [Rose Kaplan] would share articles with each other that we found. Sean Carroll is a friend of mine at CalTech and I would watch his lectures on YouTube.

Nerd Report: I remember you are a runner. You once said you run 10 miles a day. Did they incorporate that into Dr. Tyler for you?

Jennifer Beals: It was already there but the running was really important to me. It sounds so odd, “to get right,” but to make sure that it wasn’t an actress running, but that it was somebody who actually runs. I don’t run at that pace, but to get that right.

Nerd Report: One of my favorite movies is Vampire’s Kiss. When you got that role and got to the set, did you have any idea what kind of movie they were making?

Jennifer Beals: Well, we rehearsed first, so at rehearsal when Nicolas started with his character, working on his character, I had no idea he was going to be doing that. I thought, “Oh, okay, I get it. This is the kind of movie we’re making.” I didn’t realize it and because I was a supporting character, it’s my job to support Nic.

Nerd Report: You’re not in the alphabet scene, but did you see him rehearse it?

Jennifer Beals: No, no, I didn’t see it in rehearsal. It’s hilarious.