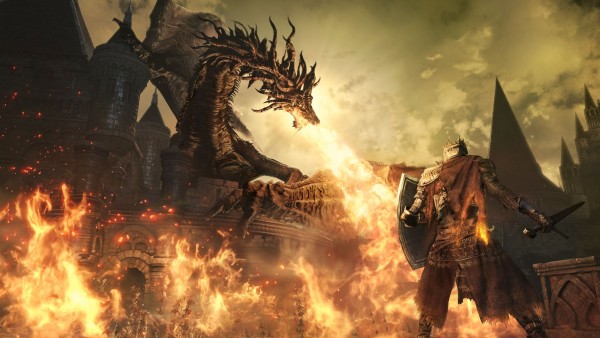 One of the biggest games arriving next year to Xbox One and PS4 is Dark Souls III. At E3, Bandai Namco invited us to watch a hands off demo presentation of this highly anticipated game. Here’s our recap:

The hands off demo for Dark Souls III was presented by Hidetaka Miyazaki, who serves as director of the game. In this presentation, Miyazaki took us through a very small but large part of the map. As the game is still in the early stages of being completed, we had about a 45-minute walkthrough and even in its early stages, it looked amazing! 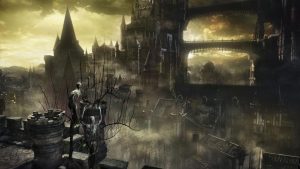 As far as the combat of Dark Souls III goes, this will be more similar to the other games in the franchise rather than of Miyazaki’s BloodBorne (this was a common question asked). You will have a variety of weapons at your disposals. Some of the weapons you will be able to have some fun with are a straight sword, great sword, dual swords, small bow and a long bow. Each of these weapons has it’s certain specialties/abilities. For instance, the dual swords will allow you two hold two swords (of course) which give you the ability to use what they call the “spin” strike. They are used for fast attacks, as is the small bow. The Great sword has a special lunging ability and is a very huge sword which is good for a mid-range attack and will allow you to keep some distance from your enemy and to strike many enemies at once.

The game features some familiar characters like the knights. These knights all have different patterns in the way they move depending on the weapons they are holding. It also has some new characters such as huge dragons and this huge black mass that moves like a snake that just devours everything in it’s way. The dragons of Dark Souls III, come early in the game and you can use their attacks to your advantage towards other enemies in the game. For example, this dragon was breathing fire at you which also ended up killing a group of enemies that were after you. So there are ways of defeating your enemies without having to use face-to-face combat. 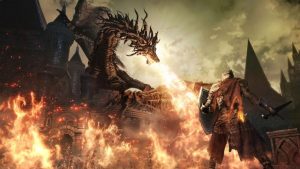 When it comes to respawning, you will come across bonfires, torches and graves which you can set fire to to allow you to use as checkpoints in the game. The graves will be hidden throughout the game and Miyazaki says that players will have a lot of fun trying to find them all.

This will be also be the first of the franchise to be exclusively released for the next generation consoles.

To be honest, I have never played a Dark Souls game but after looking at this one, I have been missing out and I can’t wait until early 2016, when this game will be released. Both the visuals and gameplay were visually beautiful and ran quite smoothly.