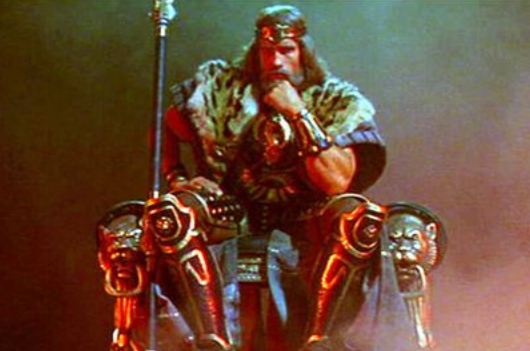 Today at the press junket for Terminator: Genisys, Arnold Schwarzenegger met Franchise Fred. It’s a good time too, because after returning to the role of The Terminator, Schwarzenegger is set to play Conan the Barbarian again. Conan the Barbarian ended with Conan sitting on the throne after years of battle. The Legend of Conan will fulfill the promise of that epilogue.

“I was hoping to do another one and I was hoping that the idea of Conan having been king for a long time, then just threw it all away and went into retirement and went off into the mountains,” Schwarzenegger said after the press conference. “That whole idea always appealed to me. Then of course he gets asked back because of some hideous and unbelievable things that are happening to the kingdom. So that’s when the battle begins again.”

Schwarzenegger has seen Chris Morgan’s script for The Legend of Conan and, while he has a few notes, he’s happy with it. “That turned out really great,” Schwarzenegger said. “It needs some tweakage but really they’ve done an extraordinary job with it, very thoughtful so I’m looking forward to working with them on that as soon as this gets out of the way, because I’m very focused on one thing at a time. Then we do the next thing.”

More on Terminator: Genisys this week on Nerd Report.