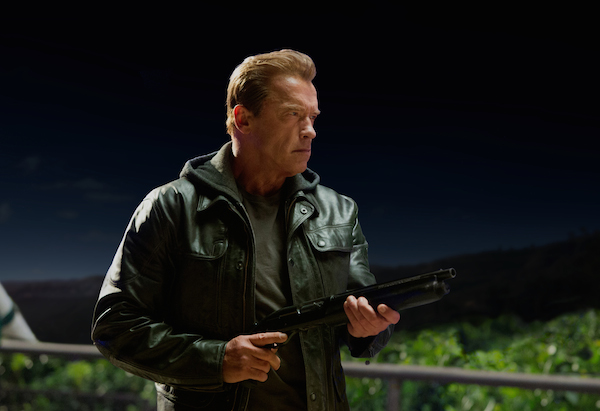 At the press conference for Terminator: Genisys, I introduced Arnold Schwarzenegger to  Franchise Fred, telling him I truly believe there should always be a sequel to everything. I asked if he agreed and he ultimately said it depended on the script and the sequel, but first he totally turned on the charm.

“First of all, when I looked at you, I said to myself, ‘This question has to be for me.’” Schwarzenegger began. “Because the first question comes right away from the most pumped up guy. And I bet you any money that he put on a little bit of baby oil just to make the forms pop a little bit. Good to see you.”

The Terminator: Genisys filmmakers remembered Franchise Fred too when I met them later. The producers at Skydance have a number of franchises for me, and screenwriter Laeta Kalogridis said she loved seeing Arnold interact with me, although she thinks he was putting me on about the baby oil. Kalogridis and Patrick Lussier wrote the script to Terminator: Genisys so Franchise Fred had a lot of questions for them too.

Laeta Kalogridis: You didn’t want to see him recast as so many websites kept saying? “Who are they going to cast as the T-800? Who will it be?” Well, it might still be Arnold.

Franchise Fred: But this is sincere, that I always want to see more story. Do you understand the appeal of that, that even if a story ends you can always start another one?

Franchise Fred: Right, it’s not like nothing interesting ever happens to them again!

Patrick Lussier: I think The Dark Tower has a great line at the end. “I know I can’t say they lived happily ever after, but I can say they lived.” So that’s what happens. People live. They keep going. The characters keep going in our minds. How do they continue what their journeys are? We always imagine so having a franchise allows you to go, “Well, here’s what they could have done.”

Franchise Fred: Did you have to recap time travel from a new perspective, the guys in the future?

Patrick Lussier: Time travel is a…

Laeta Kalogridis: Actually, I would say the thing about time travel and movies generally, with or without time travel is that plot holes will exist in any film. WIth time travel it’s just exacerbated. It’s just a question of what you can and can’t accept. What can you live with? What will viewers enjoy? What can they look past as all great movies have these moments where if you really look closely at it, you think, “Wait a minute, T-1000 is made completely out of liquid metal. How did he travel back? He’s dead. He’s not organic.” And yet you see him in the time sphere, very clearly stated in canon, nothing dead will go. Wait, what? But you don’t care. You don’t care because at the time you first see him, he looks human and by the time you realize he’s metal, that part’s so far back you don’t care anymore.

Franchise Fred: When you came up with “nexus point in the time flow,” was that the key to figuring out this story?

Laeta Kalogridis: I like the idea of nexus points myself.

Patrick Lussier: So do I.

Laeta Kalogridis: I think mostly what I like is the idea that some events and some individuals, because I think that this is actually true in life, are disproportionately influential in terms of what happens in the world. And I think Sarah and John and Kyle are all examples of how a single individual can matter so massively to the core. So it’s a very Foundation idea. It’s a very Isaac Asimov idea that all it takes to alter the course of history is one or two extreme outliers. But that’s what nexus points are about. They’re not just events but the people, the very unusual people who cause those events. That’s why John Connor is a nexus point himself. What happens to him, because of what he’s able to do, what he is. Because he’s an outlier.

Franchise Fred: The smile is a famous deleted scene from Terminator 2. Did you definitely want to get it in the final cut of Terminator: Genisys?

Laeta Kalogridis: That’s why it’s there. It’s a love letter to people who missed the scenes as much as we did. And I know why they weren’t in the theatrical release but they were so good. They were so good.

Franchise Fred: But if it didn’t work in that film, you got to craft a way where it would now.

Laeta Kalogridis: And is it shorthand for the people who recognize it to know okay, well, his learning chip has been switched on. This machine is adjusting, adapting and changing.

Franchise Fred: Did you specify The Ramones’ “I Wanna Be Sedated” in the script? Could it have been Guns n’ Roses?

Laeta Kalogridis: Oh, back and forth actually on lots of different choices musically, so we didn’t specify The Ramones. No, we didn’t although that conversation just kept coming up about what it was going to be. I wouldn’t have gone for Guns n’ Roses, maybe I would’ve. I’m not sure. Guns n’ Roses is so associated with the franchise.

Franchise Fred: It is John’s song though, and The Ramones are Sarah’s.

Patrick Lussier: We had more conversations about George Thoroughgood.

Laeta Kalogridis: That’s is actually one that kept coming up, “Bad to the Bone.”

Patrick Lussier: We discussed that. It didn’t ultimately make it in but that was one that was much more discussed as the sort of iconic song of the franchise.

Franchise Fred: When you’re writing dialogue for the T-800 to say, are you conscious of what could become a one liner?

Laeta Kalogridis: I think you are and you aren’t. Sometimes trying to create one-liners is…

Patrick Lussier: It’s more of a cadence. It’s more about trying to find the cadence that both Jim and Arnold had created in the first two movies that then continued of trying to be true to the cadence. I think especially in the first movie and the second movie, so many of the one-liners may not have been intended that but literally came out of the cadence of the character.

Laeta Kalogridis: The first movie, “I’ll be back,” the line was “I will be back” and they had to shorten it. The story I’ve always heard is they shortened it because it was a little more difficult to pronounce. They did it on set and at the time, there wasn’t an intention for it to become what it became whereas “Hasta la vista, baby” was totally, utterly intentional. So I don’t know, I think it’s a balance. On the one hand, you try and write stuff that fits him and you see what pops. On the other hand, depending on who you are, I think “Hasta la vista, baby” worked so well because it was tied into what John had taught him. John had taught him those words and they were very much a reflection of their relationship and that’s really the reason it worked in the movie.

Franchise Fred: How trippy is it that you write action and dialogue for The Terminator and then Arnold does it?

Patrick Lussier: I’ll tell you, the day on set when he was in the helicopter and he says, “I’ll be back,” it’s like you’re in the best reunion tour of The Eagles, The Who, Led Zeppelin or whatever and it’s it’s like, “Oh my God, he’s playing the greatest hits.” People applaud afterwards. Everybody in the crew had grown up with that and to hear him do it in that context as that character in that moment was an amazing thing to be part of.

Laeta Kalogridis: I felt very lucky to be there.

Franchise Fred: You don’t control the trailers or poster, but would you have liked to keep the twist a secret?

Laeta Kalogridis: It’s almost an impossible question to answer in this day and age, because we came up making movies in a time, we’re the transitional generation in some ways because we remember both how it was before and experience how it is now. When there was a time when you actually could release a movie and not have it be spoiled.

Patrick Lussier: Think of The Crying Game, how so much of the marketing of that film was “Don’t tell once you know.” The posters didn’t say, “She’s a dude.” That wasn’t how that movie was presented. Certainly even movies like Scream, the mystery of who the killer was was kept hidden for a really long time. But remember when T2 came out. Remember two or three days before the movie opened, they announced that Arnold Schwarzenegger was playing the hero of the movie.

Franchise Fred: It was longer than that. It was in the trailers.

Patrick Lussier: And you were just like, “Whaaaa?” Whereas if you watch the film, if you had watched that film not knowing that, what a different experience that would’ve been because there would’ve been a complete “what the f****?”

Franchise Fred: By Terminator 3 Skynet went from a physical place to online. We didn’t call it the cloud yet, but that’s what it was. Now it’s an app, so does that speak to how real technology has evolved outside of the movies?

Laeta Kalogridis: The interesting thing about the fact that Danny refers to it as an app is that of course it’s not. Of course it’s way more than that, but we fool ourselves, and that I think is part of the modern day technology idea. We fool ourselves into thinking that the things that we create are much more limited and benign than they are.

Franchise Fred: Listen, our apps are collecting our data.

Laeta Kalogridis: Programs that are independent agents that make real time decisions in the financial world for example. Those programs are acting autonomously because of the necessity for speed in trades, the microsecond necessity for speed. But you’ve heard of the idea of the Skynet effect, because of course Jim has, like everything else, transformed the way that technology is viewed because he’s a visionary. The Skynet Effect is the idea that independent programs with different aspects of intelligence could actually aggregate independently online and form an intelligence themselves. It’s very Ghost in the Shell because the idea of Ghost in the Shell was that the first machine intelligence is accidentally created, not intentionally created. That’s what the Skynet Effect is. Keep making all these autonomous programs and what if they all get together, have a barbecue and turn into Skynet?

Patrick Lussier: Because everything’s connected and everything’s linked. The more they do for us, the less we police them.

Franchise Fred: How did it feel to get James Cameron’s endorsement?

Laeta Kalogridis: It was an extremely generous and unbelievably kind thing to do.

Patrick Lussier: Amazing to get that endorsement. To even think that we came close to living up to [his movies].

Laeta Kalogridis: All you want to do is create something that feels like it can live in the same universe and be worthy of the IP. But the IP all came from his brain. It’s all something that he created out of whole cloth which is stunning when you stop and live with it for a second. You realize that all of that world came out of that mind. It’s pretty amazing. 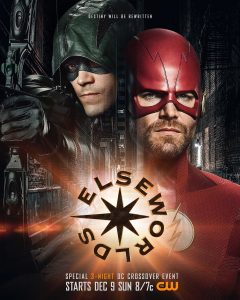 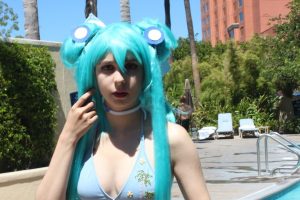 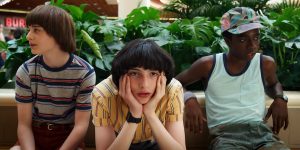 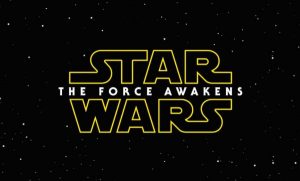 STAR WARS: THE FORCE AWAKENS Leaked Images Give Us Our First Look At Luke Skywalker, Inside The Millennium Flacon And More 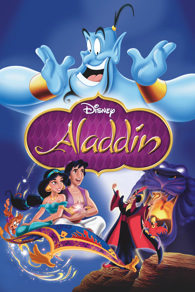