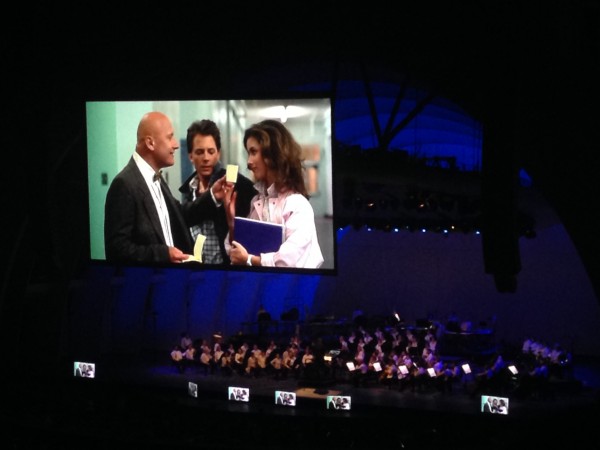 The greatest sorrow of Franchise Fred is that the people who created and control Back to the Future have no interest in making a sequel. They missed the window to make it in the real 2015 anyway, so I have to make peace with it. More importantly, I’m living in the real year 2015, and there’s still the real October 21 to look forward to! 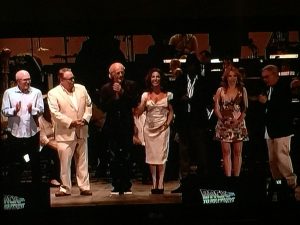 One of the joys of this year’s 30th anniversary was getting to see Back to the Future In Concert last night at the Hollywood bowl. A live orchestra played Alan Silvestri’s score along with the movie. I love legitimate theater! The cast was even there to celebrate, including my personal wardrobe consultant Claudia Wells, Lea Thompson and Christopher Lloyd.

The orchestra did a seamless job, so much so that I really forgot they were there. I was just watching the movie, though the open air acoustics of the Bowl could never be replicated by any sound system. I’ll also never see the film with 17,000 other devoted fans again. Key moments generated such communal love, it was a special feeling. Like when Doc says he’s going 30 years into the future, and we all collectively knew that’s now. We’ve been waiting for you, Doc.

For the concert, the orchestra added 20 minutes of new music, mostly in scenes that were previously unscored. That was really noticeable. I mean, I know this movie by heart, so I appreciate giving us added value for the concert, but those scenes don’t have score for a reason. They were mainly just riffs on the Back to the Future theme, so “new music” is a misnomer. But look, I’ll never see the movie with those sections of music again, so it’s cool.

Interestingly, there was an intermission, right after the manure scene. Lorraine says, “I don’t know, but I’m going to find out” and it fades to black. It actually felt like a natural place to insert an intermission. Before returning, the orchestra played the western theme from Back to the Future III. Nice way to work every bit of Silvestri into the show. They also played the version of Back to the Future without the To Be Continued… tag, as it was in original 1985 film prints.

Back to the Future In Concert is touring and the Bowl will be doing other movies with live orchestral score. This wasn’t the first either, but it’s the first one I attended. So if a movie you love is being performed this way, here are the things to consider. There may be some extra out of place music. There may be an intermission. At their best, the orchestra may just blend into the movie anyway. But when else do you get to see a movie in a stadium full of people who love it just as much as you do?

Tags: Alan Silvestri Back to the Future In Concert Hollywood Bowl