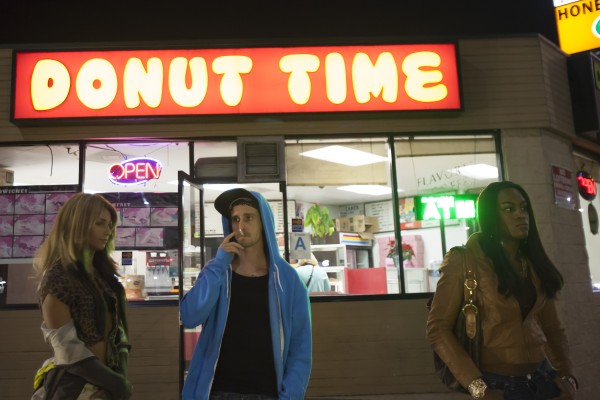 I try to see as many movies as possible at Sundance, but even when I fit some 36 titles into a week, it’s not even 1/3 of all the movies that play there. One of the movies I caught later was Tangerine, which is a true Sundance story in many respects. As the first film shot on the iPhone 5, it is a cinematic pioneer. As the story of trans prostitutes on the streets of L.A., it represents indie cinema’s focus on often marginalized communities.

Writer/director Sean Baker came back to Los Angeles to discuss Tangerine with Nerd Report. Tangerine opens July 10 so you can see what an iPhone movie looks like on the big screen.

Nerd Report: What came first, the story of these two trans prostitutes or the technique of shooting a movie on the iphone?

Sean Baker: Well, I guess it was the idea of focusing a story on that area and vocation. To tell you the truth, I would have to say that the focus of shooting a film about two transgender sex workers came first. Then when we had no budget, we said, “Let’s figure out a way of doing this.” And we eventually got to the iPhone.

Nerd Report: How did you find Kitana Kiki Rodriguez and Mya Taylor?

Sean Baker: Mya was at the LGBT center on McCadden, which is in the neighborhood but around the corner from the intersection that we shot at. So she was just there. It was one fateful spring morning. She was in the courtyard. I saw her from 40 feet away and thought oh my gosh, she has something about her and I don’t know what it is but she has this aura, something that’s pulling me in. Chris and I were just pounding the pavement doing research, introducing ourselves to people in the neighborhood and we said we’ve gotta talk with her. We approached her, introduced ourselves and she just expressed this true enthusiasm. She was an aspiring entertainer so she said, “Yeah, I would love to act. Let’s trade contact information.” We started hanging out on a regular basis at the local fast food joint and just hearing her stories, anecdotes. She would bring people by all the time and introduce them to us and us to them. There was one time that she brought Kiki.

Kiki sat down next to Mya and I saw the two of them together and I thought, “Oh wow, just visually the complement each other. They contrast each other. There’s something very striking about the two of them together.” Then when Kiki opened her mouth, all of a sudden they became this comedic dynamic duo. I just knew that we would be creating our characters so that these two could play. And then the four of us just developed this story together based on a lot of the stories that they had known from the neighborhood. Their friends who had actually worked the streets and Kiki was the one who eventually pitches us the woman scorned plot. “You want two people coming together, I’ll give you a story of two people coming together. There was one time there was this fish.” And we were like, “What? Define fish.” That led us. Actually that plotline never played itself out in real life but it was something being contemplated by one of the girls. We just thought it was just so full of drama, it was very layered. There was many things going on in that and it would take our characters on a journey. So we decided to make that our A plot. Very collaborative.

Nerd Report: It occurred to me, a street level prostitute probably doesn’t have time to explain to the john that she’s a trans woman. Or do they want it to not matter and they’re just soliciting as a woman?

Sean Baker: Well, that area is sort of known for transgender sex workers so I think the johns who are in that area know what they’re getting. That’s what I’ve seen.

Nerd Report: Scott Krinsky’s role seemed particularly pathetic. Was he game for going all out in that role?

Sean Baker: Oh, I think so. To tell you the truth, it was written for another actor and he couldn’t do it. Then my producer suggested Scott. I hadn’t even met Scott. I talked to him on the phone. The first time I was meeting him was when he showed up on set and it was a pretty chaotic day. It was a day that we were already about three weeks into shooting. There was a lot of tension on the set and he was game. He was just game for whatever, just to get us through the day. But he’s also really method. He’s wonderful. In order to get himself winded for that scene, he actually ran down the block back and forth until he was winded. He was a trooper. I’m really, really glad that my producer suggested him because there’s something about him. He has quite a persona. I’m happy with my whole cast. I think that everybody, even the people who have three seconds of screen time, I’m really proud of this cast.

Nerd Report: The fights get pretty violent. Were they carefully choreographed?

Sean Baker: We didn’t have a stunt coordinator so we had to do it ourselves and we did of course always think of safety first. One time in which something happened in which we had really no control over it is when Mickey fell. Mickey fell when she was getting onto the bus and it was strictly because she slipped on the grime of the sidewalk. We didn’t see that coming at all. We thought we were going to run into problems with some of the fights and the slapping. We took our time with that but we never thought we’d actually have to take time of somebody getting onto a bus, next thing you know she falls and it was a pretty hard fall. She had bruises from that fall and we thought we were going to have to shut down production. It was actually a very hairy moment for us because I wanted to quickly comfort her and find out if she was okay, but the bus had taken off. It was this moment where I was calling to see how she was. It was a particularly dramatic night. Getting back to your question, the fighting, I told them straight out in the very beginning, “Mickey, I don’t like the way American films, you can always tell the fighting isn’t real but in French films, the slapping’s always real. So let’s think like the French and let’s do it. Let’s do it for real. I’ll take a slap if you’ll take a slap.” That’s how we handled that. Then of course when the sidewalk wrestling was happening, we just took our time with that. We did every shot individually We never allowed it to be too improvised.

Nerd Report: Was the iPhone 5 just the newest model at the time you shot?

Sean Baker: 5S. It was before the 6 but I don’t think there’s been a real upgrade with the camera. But, the app that we used, there’s been an upgrade with the app and now you can shoot 3K on an iPhone which is pretty amazing. When we shot, it was a year and a half ago, and it’s just amazing to see how much technology’s already advanced.

Sean Baker: No, it was the Camera app. The other tools, we had a stabilizer, a steadicam stabilizer which is only about eight inches. It was just a grip. And the anamorphic adapter that fit over the iPhone lens and allowed us to shoot in true scope. Those three tools I think elevated it to a cinematic level and then we were ready to go. We had tests done and we blew them up on the big screen for our financiers to see, and I think it was Mark Duplass who finally gave me the pat on the back and said, “Yeah, go ahead. Do the iPhone. It’s punk rock.” When I got his seal of approval, I thought okay, let’s move forward and embrace this.

Nerd Report: Do you have your next subject in mind?

Sean Baker: We’re still trying to work that out. Financing is so difficult these days, I want my budgets to be bigger so you have to start thinking about A-list actors and how that’s going to help you get financing. I don’t know quite yet but it’s coming up fast, I know that. There are a few different ideas we’re juggling.

Nerd Report: What sorts of stories would you do with bigger budgets?

Sean Baker: It’s hard to say. I always look at the work of Paul Thomas Anderson as a good model, because he’s able to do what he wants to do. He’s able to have big budgets. He’s able to work with A listers but tell, I would say, complex stories. That would be ideal.

Nerd Report: Is it a good time to be telling stories about trans women?

Sean Baker: Yeah, I think we just hit it at the right time. When we went down this road, it was two and a half years ago that we started thinking about this idea. So it was really before the trans movement became so part of the zeitgeist. Now it’s here and it’s interesting to see all of these different films and television shows that focus on different aspects of it and different communities and different subcultures. The reason I chose this one is because I already started focusing on sex work with my previous [films], and even though I think some people will say, “Aren’t you reinforcing a stereotype? This is a stereotype of the sex worker and the trans community.” I see it as this. Every time you see a trans sex worker, it’s always a walk on role that is used to move the plot forward or the butt of a joke. They’re never developed. They’re never humanized. In this case, I wanted to make our two lead characters, trans women of color who are sex workers played by real trans women. That’s how I wanted to cover the subject.