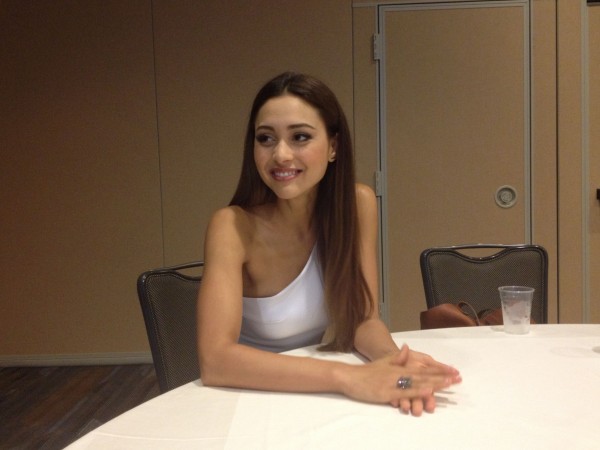 I first met Lindsey Morgan through the movie Detention, which I supported since its SXSW premiere. So I was thrilled to see her join the cast of The 100 with some badass Gravity astronautics in the second episode. So when the cast of The 100 gave interviews at Comic-Con, I went to catch up with her. She was happy to see me again too and gave me a hug before we sat down.

After two seasons, her character, Raven is battle hardened and scarred. Season three is coming to The CW this fall and we got a preview in a roundtable with Lindsey Morgan at Comic-Con.

Nerd Report: Raven has gone through so much since the show started. She came to earth, almost died. How different is she now than when you started?

Lindsey Morgan: I’d say Raven is very different now. I think she has been tested in so many ways, been pushed to the limit in so many ways physically, emotionally and mentally, that it’s natural for any human to have gone through what she’s gone through to not come out scathed and scarred and greatly changed. I think in season one you saw she had a lot of swagger to her and just strength. Season two, because of what she went through, I think a little bit of her fire got dwindled down because she got so crushed. So season three I think you’re going to see everything that she’s gone through and the ramifications of it in the person she is now because she is changed.

Nerd Report: Is any of that swagger still left?

Lindsey Morgan: You’re going to see that. Yeah, Raven is going to get a chance to rebuild herself or find out who she is now with everything that she’s done and everything that’s been done to her. She’s not one to give up without a fight so she’ll definitely be rebuilding herself but maybe a little differently this time.

Q: You say fights. Are you looking forward to action scenes or do they fill you with fear?

Lindsey Morgan: I love action scenes. I want Raven to fight more and to do more action sequences. Brace or no brace, leg or no leg, I think she can do it so I look forward to that a lot. I think think we’re going to have more of that for her this season. We’ve been talking.

Q: What excites you the most about season three?

Lindsey Morgan: This season is becoming a lot more heavy in the science fiction area. Me personally, I love that. That’s stuff that I like so I’m really excited to delve into that. Because Raven is so tech savvy, she’s going to have a big part in that and that’s really exciting for me.

Lindsey Morgan: I’m also taking riding lessons, but I think mine’s a little bit different than hers. There’s a scene with a horse. I think that’s all I can say. No new skills on the horizon yet but hopefully something.