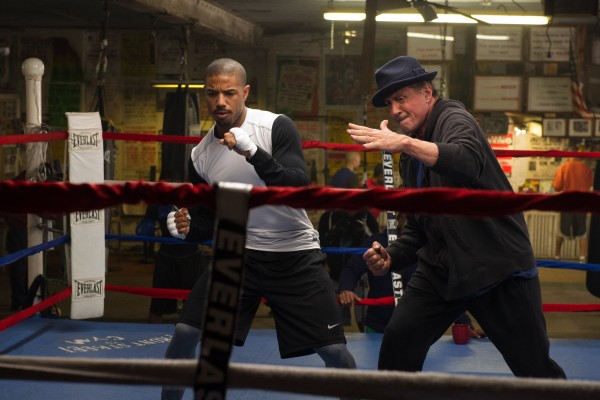 Michael B. Jordan and Sylvester Stallone in Creed

Ryan Coogler was on a Comic-Con panel on diversity in geek culture. After the #WeAreAllHeroes – The Changing Landscape of Comics, Geekdom and Fanboy Culture, Coogler was nice enough to answer some of my fanboy questions about his Rocky spinoff Creed.

Franchise Fred: Did Stallone really think he was done with Rocky before you pitched him this idea?

Ryan Coogler: Yeah, he absolutely [did]. I think for him Balboa was him putting the idea to bed personally, but I think the idea coming from somebody that’s from a different generation, coming from a personal story like this one, got him around to do it. He was really motivated to do it once he met Mike too.

Franchise Fred: Is there a scene where Adonis says, “Why didn’t you stop that fight, Rocky?”

Franchise Fred: Was there anything you wrote that Stallone said, “Rocky wouldn’t say that?”

Ryan Coogler: I mean, every actor will make things their own when they perform it, so that was a very fluid process.

Franchise Fred: Did Stallone do the fight choreography?

Ryan Coogler: Not in this one but he consulted though. He was always there for input and he had great ideas because nobody’s shot more fights than he has.

Franchise Fred: Well, I’m Franchise Fred. I think every movie should have a sequel so thank you for bringing Rocky back this way.

Ryan Coogler: All right, thank you very much.