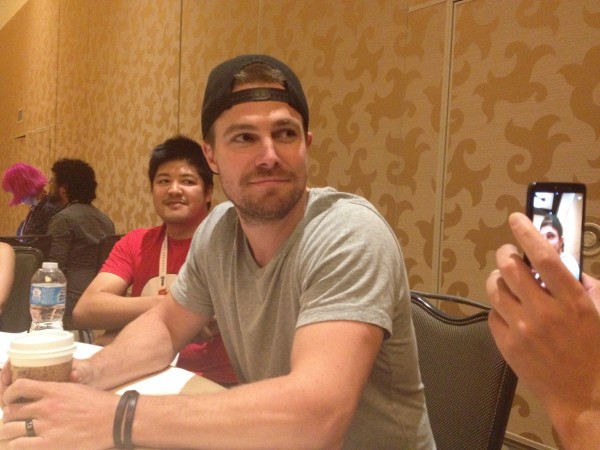 This year marked the fourth appearance by the Arrow cast at San Diego Comic-Con as they are entering their fourth season. They made lot of announcements at their panel, but in press roundtables we got a little more information about the new season. Neal McDonough is cast as Damien Darhk, and Stephen Amell speculated on what that will mean for Oliver Queen.

“I don’t know how their relationship exists,” Amell said. “Oliver knows precious little about Damien Dark. I don’t even know if he understands when Ra’s referred to a hive of operatives that he meant an actual hive. He meant hive. That’s Diggle knowledge. That’s not Oliver knowledge but Damian brings elements to Starling City that again will I think help fuel our flashback story this year with Oliver.”

Season three ended with Oliver and Felicity (Emily Bett Rickards) leaving Starling City. Fans are already guessing where they will end up. “We do spend time in Coast City,” Amell said. “I meet an old friend.”

Caity Lotz is getting her own show as a cast member on the spinoff Legends of Tomorrow. That means Sarah Lance is coming back to life. Hopefully Oliver will get to see her before Legends begins.

“His reaction’s going to depend entirely on the state that she’s in,” Amell said. “We teased a lot of things about what the Lazarus Pit does to you in season three and we haven’t quite explored them yet. We have someone that came out of the Lazarus Pit, Thea, but Thea went into the Lazarus Pit kind of still alive but just in a state that modern medicine couldn’t bring her back. If Sarah comes back to life, and one assumes that it happens via the pit, Sarah’s been dead like a year. So that’s a very different thing.”

Arrow returns October 7 on The CW.