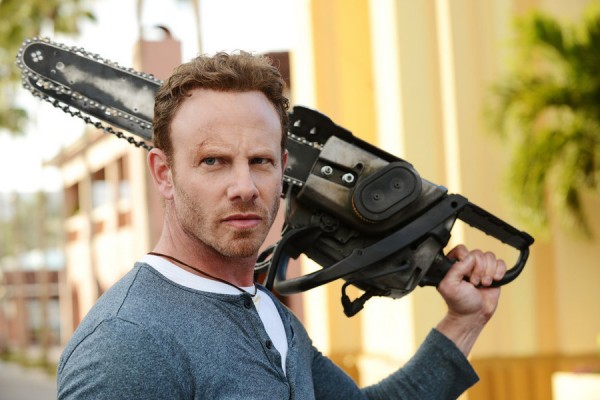 You know I’m looking forward to Sharknado 3 because I’m Franchise Fred, but the Sharknado movies embody a cinematic philosophy even deeper than my love of any and all sequels. The logic of Sharknado movies is that anything can happen as long as its awesome. Hollywood movies have become too obsessed with realism and believability. If something too outrageous happens, audiences will actually reject it because it doesn’t make sense, even if it’s a fantasy world with magic and sci-fi technology. 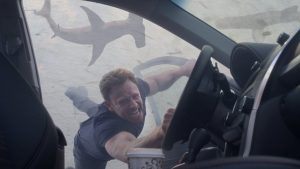 The gritty realistic approach is fine as an aesthetic choice but shouldn’t be he definition of cinema. Look how boring Hollywood movies have gotten with all their exposition trying to explain things we’ve already agreed to believe in by buying the ticket. In movies “because it’s awesome” is the only reason you should ever need for something wonderful to happen, and the Sharknado movies are literally a string of “because it’s awesome” moments crammed in between commercial breaks.

Sharknado 3: Oh Hell No immediately opens with a franchise references that makes me happier than the actual franchise they’re referencing has lately. In a world where sharknados have happened twice, experience weighs on people.

Some have a bit of PTSD, some have developed expertise, but following the rules of trilogy, there are new twists in part three as well. The Sharknado universe is expanding exponentially like the Mad Max world.  This is how a series should develop. The second time it happens, it’s still a surprise. Who expects it to happen twice? The third time and beyond you’ve got to somewhat acknowledge the regularity of it. Sharknadoes are the new normal.

The mythology is evolving too. The logic of shark feeding is applied to skybound sharks. Think The Perfect Storm with sharks, though still built off the original’s method of dropping bombs into tornadoes. The more epic it gets, the more Sharkando 3 acknowledges the logic of “you accepted sharks in a tornado so you have to accept this.“ It’s the perfect marriage of Franchise Fred and “because it’s awesome.” If you’ve established some absurd logic originally, where else can that logic take you? Ultimately, this sequel goes where all franchises should end up eventually.

Sharknado 3 evolves philosophically too. How should people interpret this life altering recurring phenomenon to which we subject them repeatedly for our entertainment? There are hints of resentment towards Fin (Ian Ziering) for his involvement in sharknados, rightly or wrongly. This is solid background material, because the world doesn’t always know what to do with its heroes, real or fictional. If Superman has to answer for collateral damage, so does Fin Shepard.

The performances capture the perfect blend of gravitas and embracing the absurd. Ziering seems to have embraced his action hero status even more than before with a confidence in the material that seems a bit more intentional than finding his way through a crazy gig.

Tara Reid too seems invested in all the family drama, as well as owning April Wexler’s new left hand. New to Sharknado Frankie Muniz, Bo Derek and David Hasselhoff give really good performances where they buy into the threat and the action tropes some of them are asked (blessed?) to play. Cassidy Scerbo plays a new Nova, the most drastic turn from her original character, in an entirely believable and appropriate to Sharknado way.

It doesn’t even matter if the visual effects don’t look 100% like real sharks and tornadoes, because what they’re doing is more awesome than Hollywood visual effects. Hollywood movies are ruined by the erroneous believe that their visual effects look “real.” It’s okay for cinema to be magic. How absurd would the concept of photoreal sharknados be anyway? The physics are already suspect. Sharks kind of explode on impact, and eat heads without so much as chewing on the neck bone. This is for the best. It moves the films along in eight minute increments.

A few added touches: Sharknado 3 finally delves into pure cheesecake/beefcake shots. It nails the patriotic symbolism and catch phrases of the disaster movie genre. We’ve got the very unusual instance of a shark actually in the water. This is the biggest and wildest Sharknado yet. Sharknado 3: Oh Hell No! airs July 22 at 9PM on Syfy.