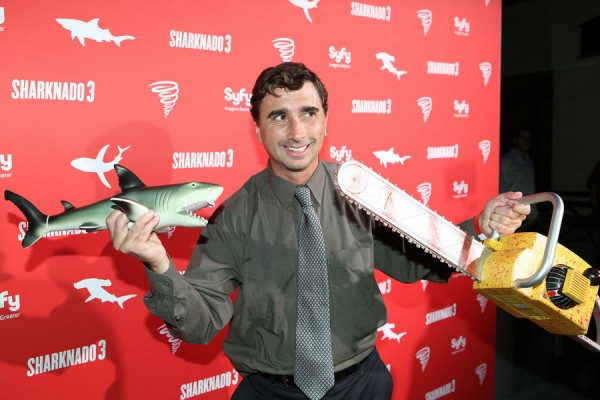 I’ve actually known Anthony C. Ferrante for 15 years. As a journalist, he was covering movies well before me, and when he ventured into filmmaking, I was actually on the set of his first movie Boo as covering press. But when he started making sequels, it brought us closer together than ever.

Sharknado became a phenomenon so Syfy made Sharkando 2: The Second One a year later. This year, Sharknado 3: Oh Hell No! premieres on Syfy July 22 at 9PM. We got to reconnect at Comic-Con, but since I got to see Sharknado 3 early, I had all new specific questions for Ferrante. So many that some were specific spoilers from the movie. I’m saving those for part 2 of this interview to run after Sharknado 3 airs. Part one is spoiler free, just to whet your appetite, pun intended, for Sharknado 3 on Syfy.

Franchise Fred: When we were on the set of Boo together, did you ever imagine you would be at Comic-Con with part three of a franchise?

Anthony C. Ferrante: No, I did not. That’s the crazy part about it. This movie was like one of these crazy things. I wanted to just make the most insane movie ever and if it destroyed my career, it destroyed my career. Now we’re making a third one. It’s cool because it’s two different sides of my personality. I love the scary stuff in Boo. Sharknado is the chance to go gung ho gonzo. That’s what’s fun about it. It’s still amazing that this thing became a pop culture phenomenon. They had the street teams at Comic-Con. Everybody knows what Sharknado is. It became a cult movie. Whether people love it or hate it, people are talking about your movie and know that it exists. That means I can make more movies.

Franchise Fred: Is Sharknado following the Mission: Impossible and Alien models, even though you’ve directed all three, that each one has a different take on Sharknado?

Anthony C. Ferrante: I think in order to keep it interesting, both story-wise and as a filmmaker, you want to try to get to do things you haven’t done before. The first one we shot in Los Angeles where we did have the Santa Monica Pier. We joke about it, but we shot in a parking lot. We shot down at the 6th Street Bridge, we shot in the tunnel there, we shot in parking lots. We created things to make it look like it wasn’t a parking lot, but it was shot in a parking lot. So it was fun, but there wasn’t a lot of huge epic things. We didn’t do anything epic on Hollywood Blvd. There were a few visual effects gags in Beverly Hills and Hollywood, but the only tactile thing that we ever did was the Santa Monica pier.

So for the second movie, we had New York as sort of a backdrop and it gave us a chance to do things that we didn’t get to do before. We got to do the airplane sequence which was really fun, but on top of that, we were shooting in Times Square. We were shooting in Liberty Island. There’s a sense of love of New York in that movie that makes it its own unique thing. It’s about how New Yorkers band together and you have a big Braveheart speech at the end. And we got to shoot at Citi Field so we had access to a lot of things that gave us a chance to do different things that we never had the chance to do in the second movie.

The third one, stylistically, it is kind of different in many ways. We’re trying to do this big kind of Die Hard/White House Down action sequence at the beginning of the movie. There’s a little bit of a ‘70s style in him running around Washington, D.C. especially that first shot we just had to pull out. It was stuff like that I thought we wouldn’t be able to get away with because it would be too retro. The producers and Syfy were really cool about it.

Franchise Fred: Are you and screenwrite Thunder Levin inventing Sharknado mythology beyond what you ever thought in the original?

Anthony C. Ferrante: Even though we say there’s more stuff going on, we never explain it. I think the moment we explain it, the movie’s over. I think you can expand what it can and can’t do, but it can and cannot do based on what we want it to do. Freddy Krueger, we don’t know how he gets into dreams. Why is Jason immortal? The moment they started explaining why Jason was immortal, it started taking away from the magic of he just is. I think that’s part of the charm of the movie. You don’t have scientists explaining this. It just exists. They’re trying to solve it but it keeps changing on them. So I don’t really think in 3 we really ever fully say, “This is exactly what’s going on.” It’s just there is a problem and it keeps happening.

Franchise Fred: I was worried you would explain it and I’m so happy to hear you say that, because the explanations of why things happen are never satisfying.

Franchise Fred: You were able to expand the world though, that there’s a sort of Mad Max fringe of Sharknado hunters in the background too, right?

Anthony C. Ferrante: Well, yeah, with Nova. That’s an obvious extension. I still firmly believe, and there’s a lot in the movie that hints towards what happened. Bureaucracy sometimes stops the ability to think clearly in stopping things. There’s a lot of red tape involved but you’re saying let’s either kill the sharks or stop the tornados. We don’t know how to do this, but there’s a debate. That’s why there’s protesters, that’s why there’s the line of the president. Fin goes, “I thought your policy was to save the sharks.” And he goes, “Not in my house.” There is this weird debate and I think that they spent so much time debating what to do about them, they still weren’t prepared that they’re still happening. That I find kind of funny because I think it’s reality. Sometimes we’re so behind the curve, if this was a real problem, there would be this debate.