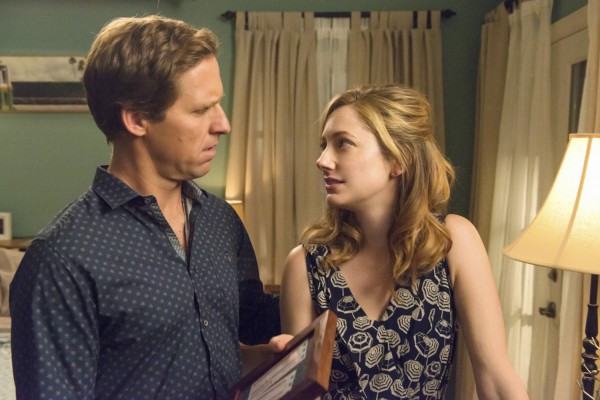 Married is back for a second season on FX. Russ (Nat Faxon) and Lina (Judy Greer) are still married. In the season premiere we saw them visit Lina’s mother in September, and her mom thought it was Thanksgiving. This week they try to pass off aches and pains as sex injuries.

To find out what else is coming up on Married, I spoke to series creator and show runner Andrew Gurland by phone. Married airs Thursdays at 10:30 on FX.

Andrew Gurland: We have a murder mystery episode that I’m really excited about, where Russ and Lina become convinced that their tenant in their guest house is a murderer. Russ’s mother comes to visit. He has a very dysfunctional relationship with her. Russ and Lina take a trip back to their old college for a night and have an adventure. Those are some of the things that are coming our way.

Nerd Report: Were any of these ideas you had in the first season that you had to save? Or did you develop them all specifically after the first?

Andrew Gurland: I would say that they were pretty much all this season. The Russ’s mom episode is based on my relationship with my mom. People were encouraging me to write about that last year but I wasn’t ready for it.

Nerd Report: As long as we’re getting personal, what was your relationship with your mom?

Nerd Report: And your mom was too?

Andrew Gurland: It is inspired by that, yes. The analogous part really is that my mother will bully me into being the adult in the relationship and I refuse. I refuse to assume that role.

Nerd Report: So are you really a lot like Russ?

Andrew Gurland: I would say that there is an intersection between Nat’s character and me for sure.

Nerd Report: With the “Thanksgiving” episode, I understand Lina was looking out for her mother, but if they had gone forward with moving her into their house, wouldn’t that have created more tension for them? Were they prepared to deal with that?

Andrew Gurland: Were they prepared to have her moving in? The issue that I was trying to deal with is that in middle age, that’s one of the big issues you have to deal with, which is your parents aging. Part of becoming an adult is seeing a role reversal with your parent, where you’re suddenly becoming the caregiver and not the care getter.

Nerd Report: For this week’s episode, did you often get Eddie and Sister Act confused?

Andrew Gurland: [Laughs] No, I just remembered there was a time when Whoopi Goldberg was a movie star and those movies did seem somewhat indistinguishable. Jumpin’ Jack Flash I remember was one of them.

Nerd Report: That was much earlier. That was back in the ‘80s.

Andrew Gurland: Yeah, that was her first one.

Nerd Report: One thing I was wondering about Russ and Lina in the past is, when they met, did Russ have game and then did he stop having game once they were married?

Andrew Gurland: I guess the larger question that you’re asking is: does being married make you less or more attractive to other people? I think in general, when you’re not trying and you’re not out there, you don’t know what to do but in some ways that makes you more attractive to the opposite sex, beacuse you’re not trying as hard. But, specific to Russ, I think Russ has a certain kind of confidence that he always thought he was appealing and still does, whether it’s true or not.

Andrew Gurland: We all understand the show better and what works and what doesn’t. We take a lot less time going in wrong directions I would say.

Nerd Report: Did you write or direct any episodes this season?

Andrew Gurland: I directed two and I took a writing credit on two as well, or co-wrote two, but I’m very involved in generating the ideas and writing the scripts of every episode.

Nerd Report: Which two did you write and direct?

Andrew Gurland: Well, they’re not the same. Whether I wrote or directed them is not a big part of it because I’m so heavily involved in all of them. I directed the finale. In the finale we deal with some dream sequences. Russ is having this recurring dream of him being a waiter in a restaurant and not being able to bring Lina what she wants as the waiter. It was really fun for us to do dreams in our signature low-fi style. To do something that was a little more fantastic was a really fun challenge. Getting to work with the DP and other producers coming up with how we would execute that really was like going back to film school for me. It was really fun.

Nerd Report: How surreal can the dream sequences get on Married?

Nerd Report: After two seasons, do you still have more personal stories you haven’t shared on Married yet?

Andrew Gurland: If the question is am I going to run out of material, no. There are many things that I have not touched on from my life but also there’s a room full of writers who have been very forthcoming with their own experiences. It becomes a tapestry of all of our experiences which is really fun. The room is really fun. It’s just like being at a dinner party where everybody’s talking about their marriages and how ridiculous we can be with our spouses.

Nerd Report: So it won’t be like Game of Thrones where you catch up to your real marriage.

Nerd Report: When you embark on a show like Married, do you have to have a conversation with your wife?

Andrew Gurland: No. I guess I should have that conversation but I’m pretty mercenary about mining my personal experiences. There has been an adjustment period. My wife has had an adjustment period but now she enjoys it and it’s kind of therapeutic for us to work through some of this stuff in the room.

Nerd Report: You still have a hand in the feature film world.

Andrew Gurland: Do I? Do I? It doesn’t feel like it.

Nerd Report: Don’t you still have a few features in the works?

Andrew Gurland: I have been so overwhelmed with this show for the last few years. I didn’t really have a break between season one and season two. So the answer is no. I do not have any feature film projects. The truth is, almost every time I have an idea now, I feel like I’d want to do it in television because I can explore the characters in a deeper way. I’ve truthfully been disillusioned by the movie business and loving what I’m seeing on FX and Netflix and Amazon. I can’t say that I miss working in features.

Nerd Report: Do you have any other shows in development?

Andrew Gurland: I do. I do. I’m excited to continue working on television.

Andrew Gurland: They’re both in the half hour world, but Married is an unusual half hour. It’s not a traditional comedy. I’ve been so inspired by the Enlighteneds and Louies and Girls and Transparents that I just feel like the half hour is opening up as to what it can be.

Nerd Report: Anything else about Married before we go?

Andrew Gurland: Just Brett Gelman is so phenomenal this year. His character AJ is coming out of rehab and is sober and trying to be celibate as well. And keeps trying to help people but they don’t necessarily want to be helped. All his manic energy is giving him a lot of bad ideas. This year he tries to get a webcam girl off the cam. He writes a children’s book about addiction. I’m just really excited about AJ’s storylines and Brett Gelman’s performance.

Nerd Report: Did you get to design that children’s book?

Andrew Gurland: I sure did. I have a poster of Farmer Todd has a Problem hanging behind me in my office right now.