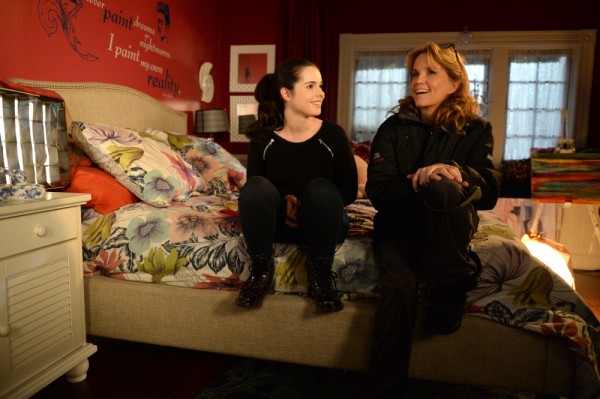 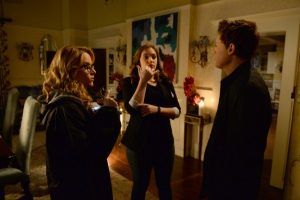 Lea Thompson was at the ABC party for the Television Critics Association. As a star of the ABC Family drama Switched at Birth, she joined the cast in attending the party for all the Disney networks. I, of course, had Back to the Future questions, which are especially relevant in the year 2015. Thompson was happy to talk about the classic film trilogy, and she wasn’t even opposed to my idea for Back to the Future IV. That’s that Franchise Fred charm.

Franchise Fred: I’m excited the new Blu-ray is coming out October 21, the day Doc and Marty came to this year in Back to the Future II.

Franchise Fred: I saw you at the Hollywood Bowl concert. What was it like to see a movie of yours in a concert hall?

Lea Thompson: Well, just to see a movie with 17,000 people is pretty amazing. The fact that I made it so long ago and people are appreciating it, it was very emotional honestly, and very beautiful to hear the score.

Franchise Fred: Has this year meant anything to you, being the actual 2015?

Lea Thompson: It’s just funny. It’s a funny thing. Obviously it doesn’t look like they made it look but I think they were trying to go for a comedy idea of 2015.

Franchise Fred: Every time the retrospective stories come on, Zemeckis and Gale are sure to say they have no plans or interest in a Back to the Future IV. I think the only people who want it are me and Christopher Lloyd, but wouldn’t it have been a great idea to have a kid from the real 2015 go back to 1985?

Lea Thompson: I know. Well, it would be really fun to do another movie but I don’t think they’ll do it. It’s hard to get a big feature film when you’re a woman of my age, so I would never say no. But I think especially Back to the Future I is a perfect film.

Franchise Fred: You can tell how much they mean to me. I even know Claudia Wells now. She dressed me.

Lea Thompson: She did! You look fantastic.

Franchise Fred: So how great is Switched at Birth?

Lea Thompson: I love Switched at Birth. I love the cast. I love that the show is still on the air after four years and I hope it makes it a fifth season. It’s just such a beautiful experience. I just love going to work there every day.

Franchise Fred: You got in sort of early to the cable era when they started doing major shows on basic. Now they’re doing shows on Netflix and Amazon too. Are you amazed at the opportunities in television?

Lea Thompson: I definitely think there’s a lot more opportunities to get a job, which is great. The ratings are all less but there’s more people sharing. It’s kind of like socialism. Not everyone’s making as much money, but we’re all working more.

Franchise Fred: Anything exciting coming up this season?

Lea Thompson: Very exciting. There’s a baby. There’s a pregnancy. Our family get into financial troubles which causes certain rifts in my marriage. There’s a lot of characters from past seasons that come to visit and cause trouble. There’s a  Bay and Emmett story which everyone seems so interested in. I’m really proud because I don’t feel like the show’s tired at all. We’re conquering new elements. We’re going different places with stories. It’s not just rehashing the same old stuff over and over.

Franchise Fred: Not just Back to the Future, but being in many movies that people still watch today, did you ever imagine while you were making them in the ‘80s that they’d still be on screens decades later?

Lea Thompson: No, and even the movies that I was supposed to be embarrassed about now still have big audiences, the people that love it.

Franchise Fred: And new ones now from Switched at Birth?

Lea Thompson: Yeah, young people from Switched at Birth. I was just in London for the London Film and Comic-Con and there were a lot of Switched at Birth fans in Europe which I was very surprised about.