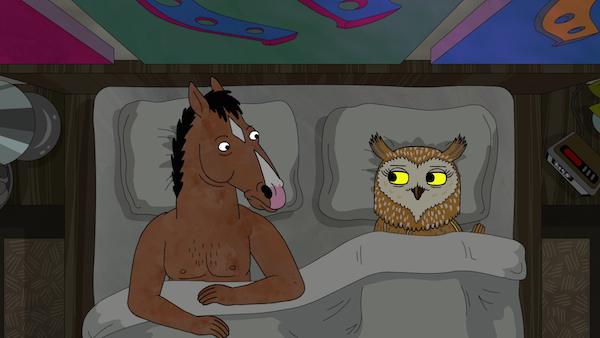 I’ve been a Bojack Horseman champion ever since Netflix recommended I watch it after Xavier Dolan’s I Killed My Mother. I even told David Boreanaz about the season one episode featuring tours of his fake house and Boreobbleheads merchandise. When Netflix presented a panel of their show runners to the Television Critics Association, I had a serious question for Bojack creator Raphael Bob-Waksberg about season two. In the season premiere, we see Todd (Aaron Paul) going to sleep reading a book by Ian McEwan called Sandwich. During the panel I asked Bob-Waksberg if there was a deeper meaning to that.

“We like to have lots of little background jokes and things for people to notice throughout the season,” Bob-Waksberg said. “It encourages people to watch maybe more than the once and find things they missed the first time. And some of our jokes are very specific and mean something, and some of them are more open to interpretation. I think with the Ian McEwan joke, it was just like: What’s a thing that Todd would read while going to sleep? Oh, probably an Ian McEwan book. And what’s a good Ian McEwan book? Todd would probably like a book about a sandwich.”

After the panel I followed up with Bob-Waksberg with more Bojack Horseman questions and ended up having a nice one on one interview with him. Bojack Horseman season two is now streaming on Netflix.

Nerd Report: I think I was the first person to tell David Boreanaz about the Boreobbleheads.

Raphael Bob-Waksberg Oh, that was you.

Nerd Report: Oh, you saw that?

Nerd Report: Oh, he was playing with me.

Nerd Report: I talked to him later though.

Raphael Bob-Waksberg Has he seen the episode?

Nerd Report: He said he did and he thought it was funny.

Raphael Bob-Waksberg Oh, I’m glad to hear that. We mean no disrespect to David Boreanaz. We’re all fans. He’s a real angel, so that’s nice of him.

Nerd Report: You got Daniel Radcliffe this year. Now that you’re established, have there been any celebrities you couldn’t get clearance on? Was Maggot Gyllenhaal a tough one?

Raphael Bob-Waksberg No, it’s funny. We’re kind of allowed to do whatever we want. I keep waiting for someone to be like, “Don’t do that.” It’s weird because we have this disclaimer at the end of every episode saying the characters are in no way related to anyone real or fictional. It’s completely coincidental. I look at that and go, “That’s not right, is it? Because Maggot Gyllenhaal is very clearly a takeoff of Maggie Gyllenhaal. And we say Jake Gyllenhaal as well, but I guess we’re covering our bases legally.” I think most people in this business have a sense of humor about themselves. I don’t think we make a joke about anybody who we felt couldn’t take it.

Nerd Report: Did you learn from South Park about doing Scientology jokes, so this is clearly not a spoof of Scientology?

Raphael Bob-Waksberg You know, I feel like in the community I’m in, I feel like we have to protect ourselves more from the improv community. By saying this is not about Scientology, all the improv people can be like, “Oh yeah, it’s about Scientology.” It actually protects us there, but actually we have some concerns about improv. So it actually might be more about improv than Scientology but we’ll use the Scientology thing as a cover for the improv while pretending we’re using the improv thing as cover for Scientology. I will say about Scientology, one of my favorite pieces of casting for the season was for a long time, we were really having trouble casting this snow monkey character who is the last scene in the whole season. It was really pivotal and we needed someone really good. What about this person? This person passed. We couldn’t find it. No, that person’s not quite… I remember it was the day before we had to really figure it out and I watched that Scientology documentary. I hear someone talking and it’s Jason Beghe and I go, “Oh my God, that’s my snow monkey. That’s the guy.” So I discovered him through him talking about Scientology. That’s how we found him for our show.

Nerd Report: Do you ever want to push the melancholy side of Bojack further?

Raphael Bob-Waksberg I don’t know further. We push it pretty far. I don’t think we’ve hit the wall yet. I think it’s something that episode by episode we kind of feel out of how sad can we go with this? It’s feeling it out as we go. Again, there’s no limits. We don’t get the notes of “too sad.” It’s a great place to work. They really let us do what we want to do. The show, built into the DNA, is he’s a sad character and he’s going to have some sad moments.

Nerd Report: Have you started the season three writers room?

Raphael Bob-Waksberg Yeah, we’re kind of gearing up. The conversations have kind of been percolating. It’s early days yet but we have a few ideas that we’re playing around with.

Nerd Report: Do you have a specific set of rules for which parts of Bojack’s world are animals and what parts are just like ours?

Raphael Bob-Waksberg No, we kind of figure it out as we go. There’s no rule. The rules kind of solidify as we go but even then, we’ll throw something out for the sake of a joke. We try to be very consistent in general of no, we established this is true. That’s what happened. This happened in 1973, that happened in 1973 but sometimes we come up to the edge of that. In season one, there’s a very quick background joke about the Beatles and it’s four pictures of beetles. In this season we got Paul McCartney and it’s like are we going to make Paul McCartney a beetle? No, we’ll let him be Paul McCartney. You have to imagine okay, maybe there are two different bands. One was the Beatles with and A with Paul McCartney and one was the Beetles with an E that was just beetles. We kind of self justify as we go.

Nerd Report: But you stuffed McCartney in a cake.

Raphael Bob-Waksberg Yes, exactly. We wouldn’t want to humiliate him. We want to dignify him. We wouldn’t make him a beetle. No, we’ll put him in this cake and make him sit in the cake for the whole episode and then jump out and say surprise to nobody.

Nerd Report: Did the Christmas special come out of someone saying, “Could you actually do episodes of Horsin’ Around?

Raphael Bob-Waksberg Yeah, it came from us saying that. I wanted to do it. I’m a fan of those old three camera shows. The original pitch was: it’s just Horsin’ Around. Netflix was like, “Maybe give it a Bojack/Todd framing device.” I was like okay, fine, and I’m glad they did because I think that stuff is really funny. But yeah, it came from me wanting to try out that style and play around with it. I’m always interested in new ways of telling stories for the show too. In season one we had our Princess Caroline episode. We had our week leading up to the wedding episode where every scene is a different day. In season two we had our three short one acts episode. Now in season three we’re talking about what are some fun different kinds of ways to tell stories? So the Horsin’ Around episode is another way to do that.

Raphael Bob-Waksberg Well, they have an algorithm and I don’t pretend to understand it, but it works.

Nerd Report: The first time you wrote the line “suck a d*ck dumb sh*ts,” did you know that was going to be your catch phrase?

Raphael Bob-Waksberg I hope that’s not our only catch phrase. It has a certain magic to it.

Raphael Bob-Waksberg Sometimes the dumbest things are the funniest.