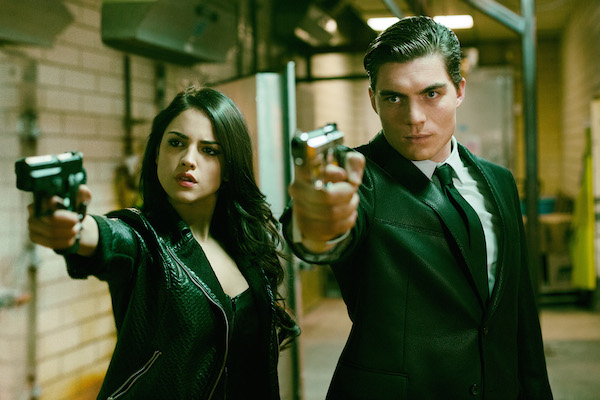 From Dusk Till Dawn: The Series, for El Rey Network and Miramax. L to R; Eiza Gonzalez as Santánico Pandemonium and Zane Holtz as Richie Gecko.

Robert Rodriguez’s El Rey Network brought From Dusk Till Dawn back last year as a TV series. While reintroducing the world to the Gecko Brothers from his movie, he also introduced America to Eiza Gonzalez. In the role of Santanico Pandemonium, Gonzalez expanded on Salma Hayek’s cameo in the film. At the end of the season, she broke free from the Titty Twister with Richie (Zane Holtz).

When we pick up From Dusk Till Dawn season two, Santanico and Richie are on their own facing off against vampire mobsters. Gonzalez was in Los Angeles for the Television Critics Association summer press tour and I got to sit down with her to talk about From Dusk Till Dawn. Season two premieres Tuesday, August 25 at 9PM on El Rey.

Nerd Report: Is Santanico actually in over her head this year?

Eiza Gonzalez: I don’t think so. I think the dynamic between Richard and Santanico is a very interesting dynamic. You will get to see, as you saw in the first season, the dynamic between Kate Fuller and Seth, Santanico and Richie, the two basic powers of the story get divided and branch out. When Richie and Santanico get together, it’s a very weird connection because this is a guy that has never been in the supernatural world getting introduced to a new world, and this is a vampire who has never been in the real world getting introduced to the real world. So it’s two different extreme version of what they’ve lived getting mixed together. So they’re learning from each other, but at the end of the day, I think the characters still have their egos and their character and their personality very established. You’re dealing with a queen in a way, a queen vampire and just this criminal. So it’s very interesting, the mixture and the powers get divided. So I think it’s been an interesting mixture throughout the whole season. It really gives it diversity for the second season and it really takes people by surprise.

I think that the really cool thing that Robert does with his characters, if you notice in the series especially, there’s a lot of recurring things to the family, which really talks about Robert also. He likes to keep those bonds together. He shows these two criminals but there’s also a love/hate kind of relationship. There’s always a bond with their family which is really interesting. You get to see it throughout this season too so I love that from Robert. This is something that I notice a lot too and that’s a cultural thing too. That’s a very Mexican thing to do. We are very bonded with our family, very connected and I notice that in a lot of his projects, he does that. Versus other projects you would see like crime shows, it’s more about heists and all these things. Robert mixes up a little bit of all the subjects throughout the whole show. He touches those subjects. He touches not the stereotypical things that people would expect from criminals.

Nerd Report: Season one was all in one day in the Titty Twister so you were stuck in that same outfit the whole time. Do you like your new costumes this season?

Eiza Gonzalez: I love it. I’m so excited. I’m very excited about that for sure, but mostly I’m excited to be able to develop this character in an environment that she is completely disconnected to. She doesn’t know this real world. She’s been stuck in this place for 300 years, so it’s really interesting to see she’s like a little lion that has been in a cage and getting back to a glimpse of who she is, learning things. It has a lot of comedy moments which is really funny. She has a scene in the car and he’s talking about Belushi, she’s like, “Who’s Belushi?” She doesn’t have any idea and he’s so used to it, and he’s so smart that it’s really interesting to see the mixture of those two personalities together. So it was really fun. Nina [Proctor], she’s amazing, our wardrobe head. She’s worked with Robert for so long. She’s done Sin City, so many things. She has such an iconic, amazing style so we got to develop [costumes]. You’ve seen nothing. There’s so many cool outfits. You’ll see eventually, there’s this bondage outfit that they had to use for me and it was insane. The work she did was so special. All the outfits, people are going to be really impressed. It looks expensive. It looks crazy. It looks very like how it looks in Robert’s world and it’s really interesting to see how they come back and forth with all this. Especially the suits for the guys. You’ll see it, it’s very cool.

Eiza Gonzalez: She has no idea, and the way she gets embroiled in it is really interesting. People are going to love it. In this season, different from the last season, everything is slower in the first season because it’s all in one day. This is a lot of things happening, constant, constant, constant, days, days, days. So the beat of the show starts slow and it starts grabbing such an amazing pace that every episode something interesting is happening. So all this season, I think people are going to love it because of that. It’s just rich in how it looks. It’s so appealing. It’s so beautiful. The DPs did an amazing job. It’s so beautifully done, and on top of it, the story’s darker than ever. I can tell you that, the stories are getting darker and darker and darker and darker and it really makes you judge the characters and their morals, but at the same time you get so pulled into the show that you indulge in that part of it. There’s no morals. Those lines get blurred out and it really starts taking you into a dark world that’s what we look for as a public. We want to be taken captive in a new world, in a new story so I think people are going to love it. I think separating us from being part of the job and part of this cast, people are really going to like it. I’m very excited for second season.

Nerd Report: Is season two really uncharted territory since it’s beyond the movie?

Eiza Gonzalez: We’re far away from what it was before. For each character, at least for mine, I think when we say all hell has broken loose, it really does. All bets are off our second season. What I feel people are going to be really hooked on is who’s a good guy? Who’s the bad one? What are the journeys of each character and what are the purposes? While watching the show it’s unclear, so you have that feeling of wanting to know what is the point of every character. How it takes you by surprise throughout the whole season is really fun. You get to see what I loved from other characters that I got to see is how they have so many different, while keeping the Quentin Tarantino/Robert development of each character which is iconic and we respect it throughout the whole season, you get to see so much more. You get to see [Richie] out of his comfort zone with Seth and vice versa. You get to discover those sides. You get to see my character in the real world. You get to see Freddie Gonzalez in a world of learning PTSD, trying to figure the way out. And the Fullers, you get to see so much and a lot of characters come in, like Danny Trejo, so we’re excited for what is coming for sure.