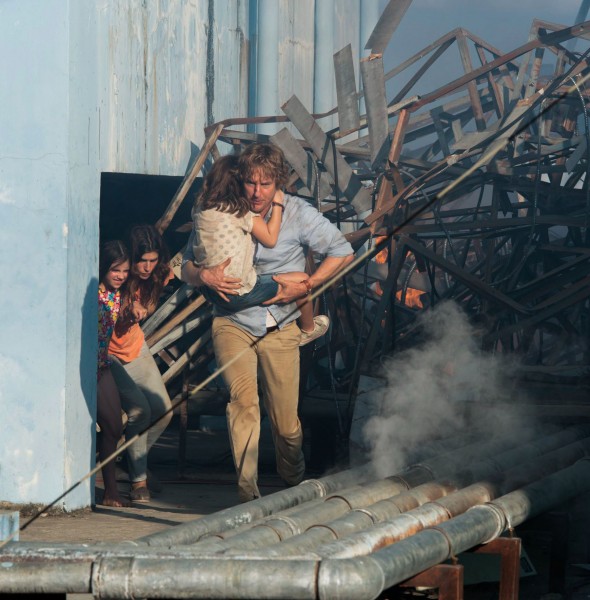 No Escape will erase any memories of the 1994 Ray Liotta vehicle No Escape. That shouldn’t be too hard considering I’m the only person who remembers Ray Liotta was in a movie called No Escape in 1994. Despite the generic title, there’s nothing generic about the Brothers Dowdle’s new thriller.

The Dwyer family is moving to Thailand because Jack (Owen Wilson) got a job there. He had to uproot his wife Annie (Lake Bell) and daughters (Sterling Jerins and Claire Geare) but it was the only way he could provide for them. While they were on the plane, a coup overthrew the government so when they wake up the next morning, they are caught in the center of a militia that doesn’t like Americans, let alone one who works for the corrupt company Jack does. A veteran traveler they met on the plane, Hammond (Pierce Brosnan) helps the Dwyers make their escape.

This is incredibly suspenseful, exciting and scary. The action is intense, but it’s not a romp. It’s survival action, which means the point is desperation, not wanton destruction. I distinguish them because I like both styles equally. My rule is always “because it’s awesome” is the only reason you ever need for something to happen in a movie. However, “because we’re desperate” works too, and there are some outrageous scenes in No Escape that work because they’re desperate. And because it’s awesome.

Writer/director John Erick Dowdle and his co-writer brother Drew craft chain reactions of danger that build and build. A helicopter causes more damage when it’s disabled than it did when it was flying overhead. Hammond is a bit of a deus ex 007, showing up whenever Jack or Annie can’t save themselves, but it does reflect how you meet people when you travel and they may show up at opportune times.

The Dwyers’ experience is about as dark as a Hollywood movie could probably ever go. Survival isn’t free. Jack and Annie have to do things that would forever change them, and there are psychological tortures too. That’s not to say the film is without levity, but because the tone is decidedly desperate, the levity is strategic. It’s used to calm the kids down, or to show how blase this is for Hammond.

The kids are used responsibly. They are the Dwyers’ greatest vulnerability, slowing them down and creating their greatest risk of being discovered. One child is used in one of the psychological scenes, but the kids are never exploited by the plot as in “oh no, the kid’s about to die/fall/be maimed. Whew, we saved them. Oh no, the kid’s about to die again!” The kids are responsible for the film’s most outrageous moment, so I’d say they’re an asset to the film.

The Dowdles prove adept at expanding their brand of suspense outside of the contained settings of their previous films. I never doubted them, but after a few found footage movies and an elevator thriller, we know how Hollywood is. So let’s all remember No Escape as that awesome Owen Wilson/Lake Bell vehicle now.