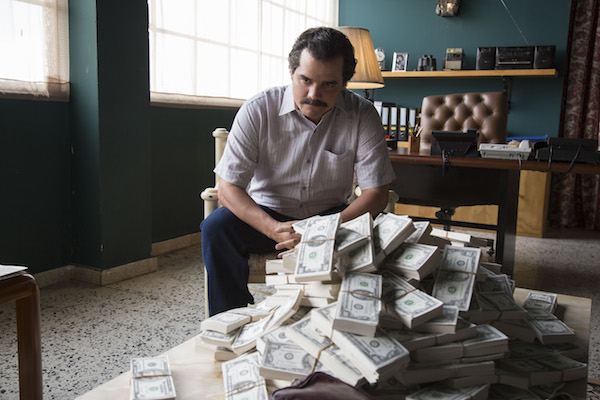 The latest Netflix series, Narcos, tells the story of legendary drug lord Pablo Escobar, played by Wagner Moura. In parallel narratives, we see how Escobar built his cocaine empire, and how DEA agent Steve Murphy (Boyd Holbrook) worked to bring him down. All 10 season one episodes of Narcos are now available on Netflix.

I got to speak with veteran television producer Chris Brancato about bringing Narcos to the screen. Brancato had just returned from the premiere of Narcos in Rio when we spoke by phone. Having worked on shows like Boomtown, Tru Calling and most recently Hannibal, Brancato shared his in-depth research about Escobar and Murphy, illustrating how Narcos came to be on Netflix.

Nerd Report: How long were you developing a Pablo Escobar story?

Chris Brancato: This was a project that a producer named Eric Newman had been developing for a number of years in the feature space. He formed a relationship with the Brazilian director Jose Padilha. At a certain point, I think Erick, like many feature film producers these days, started to think about the story of narcotics trafficking in Colombia as being too big a subject matter for a two hour movie. There had been some people who had attempted to do the book Killing Pablo as a feature film and you just can’t fit the breadth and depth of this story in two hours. Eric was very smart and he took the project to Netflix with Jose attached to direct. I was called aboard after that, so the project was initiated by Eric Newman and I came aboard to work with Jose on developing the scripts  that we shot as what would be the pilot, but it was a 10 episode straight to series order, and in fact is 20 episodes to tell the story of Escobar’s rise and fall. That was the initiation of the project when Eric and Gaumont studio called me and asked me if I wanted to be involved as the show runner. I felt like I was born to do this type of subject matter and this type of show so I said yes right away.

Nerd Report: Were you show runner on other shows before?

Chris Brancato: Years ago, I created a show for the Syfy channel called First Wave. I show ran Law & Order: Criminal Intent in its last season. I was an executive producer of Hannibal with Bryan Fuller. Yes, I’ve run a bunch of different shows and made a bunch of pilots. This was something for me that was less a new experience in terms of show running and more of a labor of love in terms of subject matter. You very, very rarely get to do this kind of darker material on any kind of network level obviously. Even in cable, you have oftentimes commercial restrictions and commercial breaks. So doing this at Netflix was an ideal place to do it.

Nerd Report: How different was working at Netflix, starting with the 10-20 episode order to begin with?

Chris Brancato: It was 10 episodes to begin with but then you’d have to end the season with Escobar still alive. So we always figured they would also pick up the second season, which they have. To be honest, the thing about Netflix that I love is I think they’re extremely filmmaker friendly. They certainly had a very strong desire to work with Jose Padilha who had done the Elite Squad movies in Brazil. They certainly welcomed the conception of the show that we had and in fact I remember meeting with Cindy Holland and some of the folks over there, Jane Wiseman, and I said, “We’ve decided we want the narcos speaking Spanish. We’re not going to do that thing where suddenly obviously Colombian characters are speaking in English. So the show could be 30% in Spanish.” And they were like, “Or 40, or 50.” I couldn’t even believe it. They just completely embraced the notion of doing a grounded, authentic show which I think is one of the things that separates it from some previous incarnations of the subject matter of which there’ve been many.

Pablo Escobar didn’t speak a word of English, so I think we create an authenticity by doing that. At the same time, when we made the show, it’s about 60% in English and 40% in Spanish. When you go into the narcos talking, you now get subtitles so in a certain way, if you don’t speak Spanish, it makes you feel like you’re entering this privileged world. You’re seeing secretive communications in some way because of the subtitles. We shot it in Colombia and that was a huge operation to get a country that, first of all, is a little bit tired of that subject matter. They were wonderful in accepting the fact that Netflix was going to come down and do this show. They wanted us to be respectful to their point of view which is effectively their cops and soldiers and citizens were the ones who bore the brunt of Escobar’s wrath. They’re the ones who bore the brunt of our North American ceaseless desire for cocaine and they’re the ones who ultimately killed Escobar and basically took down most of the other major drug traffickers of that era. And certainly we were intending to tell the Colombian side of things, both the good and the bad.

Nerd Report: Is Narcos definitely 20 episodes and out? That’s when Pablo dies?

Chris Brancato: Well, you could continue the series. In other words, the interesting thing that you see with El Chapo. You could name me a country and I could pretty much tell you what cartel operates in that country whether it’s D-Company in India doing heroin or whether it’s the Guadalajara cartel in Mexico or Valle del Norte in a later Colombian cartel, there’s no shortage of drug cartels around the world. I used to joke that wherever Netflix is opening its service, we can go find a drug cartel there and do the show. I think yes, Escobar will eventually be dead and the series would have to move on to other stories.

Nerd Report: Possibly in parallel eras like the ‘80s or all different?

Chris Brancato: To my mind, I would assume that the next very, very interesting story to tell is that of the Calle cartel. In season one, we tough on the rivalry between the Calle and Medellin cartels and ultimately, after Escobar was taken down, the Calle cartel assumed a kind of pre-eminence. So the story of how they got taken down is pretty darn interesting too, though much less known to people. In fact, Escobar’s story isn’t that well known to people. If you mention Pablo Escobar, you go, “Oh yeah, he was that drug lord.” Very few people know the incredible richness and depth of the story and the complexity of this guy. He was a monster and a psychopath but also he ran for Colombian congress as an alternate. He was a man of the people. He was a Robin Hood. He flew over in a helicopter over the barrios he built in Medellin. So just a very, very multi-layered character which is obviously always what you want to be trying to write. Wagner Moura starred in Jose Padilha’s Elite Squad movies played Pablo. He’s a brilliant actor. It’s hard not to feel a weird empathy for him even as he’s doing these terrible things.

Nerd Report: At any point do you have to address the Entourage factor where the Medellin film was a joke about his bid to be a serious artist?

Chris Brancato: [Laughs] It’s funny, I didn’t watch the season of Entourage where that stuff got brought up but I’ve obviously heard about it many times. I like Entourage very, very much but yes, when we started making this show, there were jokes and friends of mine who sent me the trailer for Medellin from Entourage. We would sit in the writers room and laugh about it and keep our fingers crossed that we didn’t do a parody, which I think we avoided.

Nerd Report: That was 10 years ago already but could it have had something to do with getting Escobar’s name back into the spotlight?

Chris Brancato: No, I don’t think that was it as much as the fact that quite honestly, Eric Newman was like a dog with a bone. He knew this was a great story to tell, and again, in Latin America, the story has been told in telenovelas, a wonderful one called El Patron Del Mal. So particularly Colombians, this is something they’ve seen told numerous times because it’s part of their national history. But Eric was interested in finding a platform for it where you could really tell the story. Netflix, to their credit, was interested in doing a show that had crossover appeal to both North American and Latin American audiences and Brazil as well. They were also very keen on working with Jose because his movies have done very well on their streaming service. It was the perfect storm of right director, right project, right territories that they were opening their service in. I actually think maybe they’ve been a little bit surprised at the fact that the United States and Europe seem very, very interested in this show as well. That’s frankly no surprise to me because it’s a great subject. It’s a great story.

Chris Brancato: He’s a real guy. He and Javier Pena, who are portrayed by Boyd Holbrook and Pedro Pascal, were signed on by Eric at a certain point in the process before I came aboard. Their life rights were acquired. When I came onto the show, I sat and talked to those guys quite a bit and got a lot of detail and information about what the world looked like from their point of view, in terms of going down there. Javier Pena was in Colombia before Murphy got there so we decided to make the window character, Steve Murphy, who’s kind of the white guy coming down to Colombia after having worked DEA in Miami and coming into Colombia where another DEA guy knows the language and knows the drill so to speak is suddenly his partner. We relied on those guys a lot for really interesting details and information. There’s all kinds of conflict in the embassy about the CIA, that Americans were interested in communists down there as opposed to drug lords at the time, so the DEA were like the kids crying wolf in the corner. They didn’t have the resources they needed so at that time, it was not fully understood how substantial the cocaine problem was going to become in our country.

Nerd Report: Having worked on Hannibal, do you have any hopes for a fourth season to end up somewhere sometime down the line?

Chris Brancato: Yes, it would be wonderful. One of the things that was incredible about that experience was working with Bryan Fuller. He really had an incredible vision for that show. I loved working with him. I wasn’t involved with the third season. I did the first two, but Bryan’s goal was to make it something that’s full and complete in three seasons if necessary, and then of course he could always conjure up a new storyline. So yes, it would be wonderful if it moved forward. In my opinion it’s a really interesting and daring show for NBC to put on network air. It’s really amazing. I had a lot of fun on that.