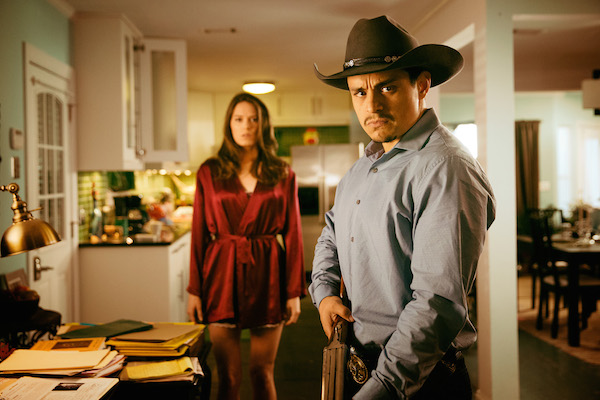 From Dusk Till Dawn: The Series Exclusive – Jesse Garcia on Don Johnson’s Double

At the end of From Dusk Till Dawn: The Series’ first season, the two Gecko brothers go their separate ways, as well as separate from the lawman, Freddie Gonzalez (Jesse Garcia). Luckily for Garcia and the fans, that is not the last we see of Freddie. That night at the Titty Twister did a number on Freddie, and he’s still reeling when we see him this season.

Nerd Report: When are you going to catch up with the Geckos?

Jesse Garcia: I don’t know. At the end of the first season, you see that these guys have an agreement to stay out of each other’s lives. When these worlds mesh and they’ve all become a part of it at the same time, they’re bound to meet again. That’s about all I can say about that.

Nerd Report: What’s going on on your end?

Jesse Garcia: As far as Freddie’s character goes, now he’s worried about taking care of his family and navigating and managing his life now that he knows this whole other world exists. He’s made a fortress out of his house with metal shudders and weapons everywhere to protect his family. Now he’s dealing with all these things going on within himself, part of his bloodline that have been awakened by getting bit by Santanico and Carlos. He’s got a cool, dark journey as well.

Nerd Report: Is season two even more uncharted territory for you since it’s way beyond the movie?

Jesse Garcia: Yeah, I think it is. Zane’s character, Richie, had a bunch of visions. He was learning to become a part of this world and didn’t know what was real and what wasn’t. I think that’s what’s happening with Freddie now, that things are being awakened in him and he has visions and things are stirring up in him. He’s discovering different parts of this world, so I think he’s got an awesome, cool journey that I think the fans are going to be really excited about.

Nerd Report: Going back to the beginning, what was your take on Freddie when you got the part?

Jesse Garcia: It was a whirlwind when I got the part. I had met with Robert for my first audition at the end of September. Got a callback at the end of October which is basically three days before my first day to shoot. I read three times altogether for it but I had two callbacks on that Friday and ended up booking it on Friday night. Flew out Sunday, on the set at five o’clock in the morning across the table from Don Johnson. It was just me and Don basically the entire first week because we had to shoot all his stuff. We didn’t even get any of my coverage on most of the scenes because we were just trying to shoot Don out. So we’d go back weeks later and shoot my stuff without Don, with a stand-in or a double. It was kind of like the character Freddie who had a huge growth transition after Earl was killed. It was the same thing with me. This is my first lead in a series. I’ve done a bunch of movies before but this is a total different animal. My growth I think as an actor and as a person from the beginning of the series up until now, I feel my character’s grown a lot and I’ve grown a lot as an artist. The first week I was just trying not to get fired and do the best work I could.

Nerd Report: Who did Don’s lines for you?

Jesse Garcia: When we had to go back and do my coverage? I think it was Brian, our first AD. I was literally doing my lines to the double’s shoulder. It was super challenging to try to find the emotional strain within the scenes three or four weeks later, acting to a shoulder and lines coming from way off camera. It’s funny those things that you have to do as an actor. It was challenging but it was a lot of fun and I learned a lot from the cast. I learned a lot from Robert and I learned a lot from Carlos and the rest of the producers and writers. I’m super grateful they gave me a chance.

Nerd Report: Freddie is introduced gradually in the first season. Was there a point where you felt like he really joined the ensemble?

Jesse Garcia: It’s funny because after Earl was killed, he’s kind of been a lone wolf in a sense for the entire first season. That’s kind of been his path. He’s trying to find himself because he can’t let anybody know that he knows these things are going on because it’s not information that the general population is privy to or would understand. They’ll call him crazy because that’s what happened with Richie in the first season. People just thought he was crazy. I don’t think he really feels like he belongs to any of those other characters and I think they’re kind of all foes to him. At the end of the first season, he has an agreement with them that they will stay out of each other’s ways, but his story’s like this. We only have a handful of regulars. Our paths are bound to cross. We’re going to meet each other, meet up or fight again at some point. As people, as just regular Jesse, D.J., Zane, everybody else, we love each other. Immediately the second we met, we’re stoked to be with each other. Instant camaraderie. We would literally work an entire day, go back to somebody’s condo and study for the next day, go over stuff and figure stuff out, even if that person didn’t work the next day. We’d help each other. The love we have for each other is great. Everyone on the set is just fun to be around. I love going to work every day. It doesn’t matter. We’ve got super, super long days this season and everyone was so happy to be working.

Nerd Report: What has this show done for you? Has it opened any doors?

Jesse Garcia: Kept food on my table, got me a house in Austin, my first house.

Jesse Garcia: Kind of, basically. I spend more time there than I do anywhere else. As far as leading me to other acting gigs, not yet. I think it’s still a fairly new show. People are still discovering it. I think hopefully after this season they’ll see some pretty cool stuff that Carlos [Coto] and his team wrote for me to do. I’m really proud of the stuff that I got to do, a lot of really cool acting stuff. 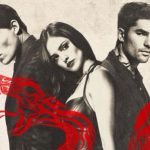 Exclusive Clip for Episode 203 – FROM DUSK TILL DAWN: THE SERIES

Exclusive Clip for Episode 203 – FROM DUSK TILL DAWN: THE SERIES