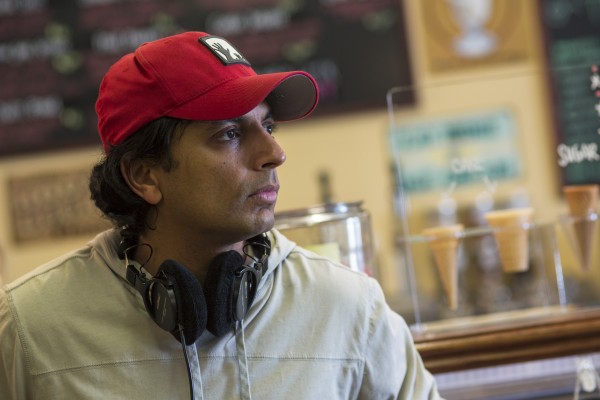 “Make the story as simple as possible and then make the characters as complex as possible.” – M. Night Shyamalan

I’ve been on Team M. Night since before The Sixth Sense came out. When I had my first internship in Hollywood, they gave me a copy of The Sixth Sense as an example of how to judge the scripts this company was developing. So I knew the twist by the time the movie came out, but it was fun to see the audience get it. Unbreakable was the one that really gripped me on a visceral level, and I can see the same sort of consistencies in The Happening too, but that’s maybe the subject of a Freditorial one day.

Right now it’s all about The Visit. M. Night Shyamalan wrote and directed the story of two kids, Becca (Olivia DeJonge) and Tyler (Ed Oxenbould), sent by their mom (Kathryn Hahn) to visit her parents. The kids start to get creeped out by naked sleepwalking and dirty diapers, but there’s something even scarier going on at Nana (Deanna Dunagan) and Pop Pop (Peter McRobbie)’s house. The Visit opens this weekend in theaters and I got to speak with Shyamalan by phone about his latest scare.

Nerd Report: Have you skills at misdirect and manipulation grown with this movie?

M. Night Shyamalan: I don’t know about grown. That’s not for me to say, but I’ve come to think of storytelling when I’m writing as make the story as simple as possible and then make the characters as complex as possible. And then tell the audience in a very interesting way how complex the characters are. I’m kind of analyzing something that I do more unconsciously, intuitively, but it’s something I think is a very fascinating way to walk an audience down one road, but it’s a road that is going in, let’s say, a deceptive direction.

Nerd Report: The grandparents’ three rules are actually not in the movie. What do you think of the marketing for The Visit?

M. Night Shyamalan: It’s great. It’s tonally absolutely what the movie is. The third rule is definitely. The first two are kind of metaphoric for the first 20 minutes of the movie which is all the idyllic experience with your grandparents. You’ve got the freedom of not being with your parents and you’re doing whatever you want, goofing around and you’re eating everything and you’re just constantly being fed. It seems like these two rules are great. I could do these. Oh yeah, what’s this little tiny bugaboo one of not coming out of our room?

Nerd Report: I’m generally immune to horror movies and you still scared me, so how did you do it?

M. Night Shyamalan: [Laughs] I didn’t use music, which I think is a very challenging but very effective way to make you unaware of my intentions. Music is handles. It guides you and it does a lot of emotional work for you, but inadvertently it’s telling you that thing. So a viewer like you are, a person resistant to scares, you’re like, “Okay, this is the scary scene. I’m emotionally and physically prepared for this that this is not going to scare me.” So your guard is up, you’re ready, you’re ready for the punch to the stomach and it doesn’t hurt your stomach. So that’s it but if you’re watching the scene and 10 scenes in a row with no music, one is funny, one is dramatic, one is scary, one’s funny, funny, scary, funny, scary, you’re suddenly always anxious but you don’t want to put up your full guard and all of that armor unnecessarily. So you actually are more vulnerable and ready for a scare. It’s a very powerful thing, silence, and the lack of instruction that you’re getting from me. It’s unnerving and it formulates in the sense of you’re being hyper tense the whole movie.

Nerd Report: Is it also a certain playful, fun type of being scared as opposed to creating something unpleasant and disturbing?

M. Night Shyamalan: Yeah, certainly The Visit is a fun scare. So you’re in a genuine roller coaster. A lo of people when they watch the movie with an audience describe the audience reaction as a roller coaster. In fact, you listen to the audio of large screenings, thousand person screenings, it’s literally like they go, “aaaaAAAAAaaaaah.” They’re laughing and giggling and rising. It’s that, because it’s certainly giving you the permission from go. My intention hopefully was received that even when you put the title on, it came on in a kitschy way and you start to hear some chuckles, because the mom just finishes saying, “Oh, they’re going to visit their grandparents. It’ll be great.” And then DUNNN, the title comes on blood red. All of a sudden you start chuckling and you’re going, “Huh, was I meant to chuckle?” It starts that whole interaction with the movie.

Nerd Report: At the same time, these kids do have to do things to survive that will probably traumatize them for life, won’t it?

M. Night Shyamalan: [Laughs] Well, here’s the funny thing. It’s that thesis of sometimes the road to healing is through hell. IT’s through the fire. There’s just no other way to get over this thing that you need to get over in your life. You need to go through something that is purifying. That doesn’t mean it’s easy and doesn’t mean it isn’t going to be the absolute nightmare version of what you’d want to experience but on the other side of that is purity and light. It’s a philosophy thing that I believe in. There are so many people that have had traumatic experiences and they come out on the other side stronger and better and all of that stuff. I believe in that.

Nerd Report: Is that why kids love to have scary movies? I grew up with Gremlins and even some of the Disney movies are scary.

M. Night Shyamalan: I think so. There’s two things I would say to that, why we watch scary movies or things that scare us. There’s a heightened sensibility that happens to us. We become fully alive and aware. We’re not passive. All of our senses are firing, like fight or flight. It feels great. It feels like being awake. There’s that adrenaline rush from that, like all of us being awake. That’s why a roller coaster, you’re thrilled and so all your senses come alive. The other thing, and this is more philosophical, is it’s a way to talk about faith, spirituality, whether there’s something else out there that we can’t see. All of those things that we probably have a hard time talking about literally, but in the metaphoric form of scary movies is an acceptable way to talk about it. If I’m scared of things, all right, I’m going to watch a movie where people are scared of things and then they overcome them or they’re dealing with it and thereby I can deal with the unknown with a little bit more strength and integrity. That’s more philosophical but it’s something that I think about.

Nerd Report: Were you this kid with a video camera growing up?

M. Night Shyamalan: Yeah, it was actually the dawn of video cameras so they were huge bulky things. Unfortunately, I wasn’t like Becca and Tyler to have these really slick, cool cameras which  you can get now everywhere. I had the big bulky videocamera that had the wire connected to the VCR so I had to have a kid carrying the VCR as I was carrying the camera. It was a very sad and pathetic sight to see.

Nerd Report: I actually had one of those too if you believe that.

M. Night Shyamalan: I believe it. If my parents saw me carrying around the VCR, they’d get so pissed.

Nerd Report: On a technical level, were those Skype scenes with Kathryn Hahn live in sync, or did all of those have to be laid in in post?

M. Night Shyamalan: What we did was she was always interacting with them on their side. We went kids first and she was live on Skype interacting with them. And then I would pick my favorite take of the kids and we would commit. Then when we shot Kathryn’s side, she would be acting to the rhythm of the children’s take.

Nerd Report: How proud are you of the Dowdles for their movie No Escape?

M. Night Shyamalan: Oh, they’re so wonderful. I wish them all the best. They’re the nicest guys and so talented. I’m always in their camp to want them to succeed in a huge way.