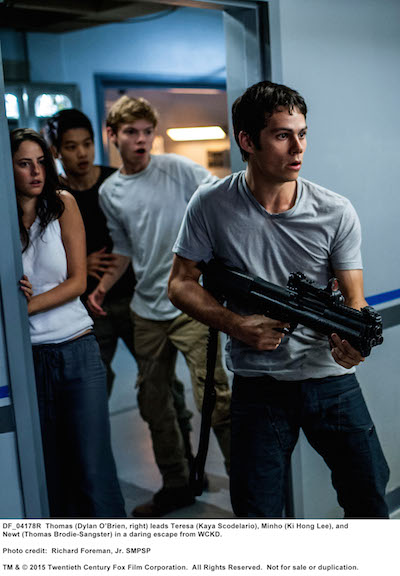 We all remember Thomas Brodie-Sangster as the little boy in Love Actually. That was already 10 years ago. He’s 25 now and we’ve seen him grow up in various roles. In The Maze Runner he played Newt, the limping member of the young clan living in the glade surrounded by the maze.

Newt is back in The Scorch Trials. Once out of the maze, Thomas (Dylan O’Brien) helps his friends escape from the WICKED compound and they must survive in the scorch, surrounded by cranks afflicted with the virus WICKED has been trying to cure all along. Maze Runner: The Scorch Trials opens Friday and I got to speak with Brodie-Sangster by phone, armed with questions from the biggest Maze Runner fans on Twitter.

Nerd Report: In the books, everyone gets tattoos on the backs of their necks that say what they are, like “the glue” or “the leader.” If you had one on your neck in real life, what would it say?

Nerd Report: How did it feel to put on your Newt costume again?

Thomas Brodie-Sangster: It was really cool. It was nice. It was about the first week that we got back and we got to put on our old costumes again. We walked out of the trailer and saw each other again in our costumes. It was just quite a nice moment.

Nerd Report: What was the most emotional scene to film in The Scorch Trials?

Thomas Brodie-Sangster: I’m not sure really. The moments of stillness and quiet in a film that’s otherwise quite ramped up, I’d probably say the campfire scene, which actually a lot got cut down. It was our one moment of quiet in the movie and it’s the moment in which we contemplate whether it was actually even worth leaving the glade and the maze where we actually had a haven and and a place to call home with friends. Now we’re out in this scorched, barren landscape but we are technically free. I suppose that was the most interesting in terms of emotion.

Nerd Report: Which scene took the most takes?

Thomas Brodie-Sangster: Oh, I don’t know. Wes does like to do quite a few takes. I don’t know what our record was. I wasn’t really counting. I was most aware of the upside down scene just because you’re very much aware of being upside down and so you’re counting the time that you are upside down. And we did that for about two days, so I don’t know how many takes we were.

Nerd Report: Do you ever get scared shooting some of the scary scenes?

Nerd Report: What do you admire most about Newt?

Thomas Brodie-Sangster: His honesty, I think. His honesty in terms of he’s very okay being himself. He’s just very confident in himself and self-assured but without coming across as arrogant. That’s what makes him powerful I suppose and well respected. He is. He’s a very well respected figurehead within the group and yet he’s not built huge and muscley and Mr. action guy. He’s go a limp. He’s not very good at a lot of the physical stuff, but yet he still maintains that sense of power and pride, because he genuinely cares about the group.

Nerd Report: If you could invent your own glader lingo, what word would it be?

Nerd Report: Do you use any of the glader lingo in real life?

Nerd Report: Do you think WICKED is ultimately good or bad?

Thomas Brodie-Sangster: I think they started out with good intentions. They want to save the world. They want to cure this disease and I think along the way they’ve lost sight of humanity I suppose. It’s hard to say whether that makes them bad really, and it’s left open ended all the way through the film. Morally, perhaps yes, but it’s also open to us being the bad ones because we technically have the cure and we’re not willing to sacrifice ourselves for the rest of humanity. So no one really knows who the good guys are or the bad guys are. It’s just a question of survival.

Nerd Report: Did you write a scene with Thomas and Newt that got cut, and will it be on the DVD?

Thomas Brodie-Sangster: Well, I helped write the scene. I don’t know whether it will be on the DVD. The film is quite long and films need to be cut down. It works without it. It was just a nice moment where Thomas feels a bit downhearted and I suppose they didn’t want him too miserable at that stage. I have to lift him up and remind him why we’re all here. I hope so. I’d like to see the scene, see how it turned out.

Nerd Report: Have you read The Death Cure script or book yet? Are you emotionally prepared for what happens in it?

Thomas Brodie-Sangster: No, I haven’t read the book or the script. There is no script yet. I’m aware of roughly what happens. Wes has been talking about just in idle conversation about ideas for the general aesthetic of the film. Other than that, I don’t really know. I probably will read the book.

Nerd Report: Are you looking forward to having a nice final moment with Thomas?

Thomas Brodie-Sangster: Yeah, it’ll be nice. It’ll be nice to finish up this project I’ve been a part of for a few years now with great people.

Nerd Report: What kind of music do you listen to?

Thomas Brodie-Sangster: All sorts of stuff. Whenever anyone asks that question, I always try and think what I’ve been listening to most recently. I like a lot of music. Patsy Cline I was listening to recently. This guy called Tricky from Bristol, he’s a DJ. Lynyrd Skynrd.

Nerd Report: What is the meaning of the gold chain we always see you wearing?

Thomas Brodie-Sangster: I just like it. I was given it at birth by my auntie and it’s the only piece of jewelry I wear because I’m not aware that I’m wearing it. It’s just light. I just quite like it. That’s all.

Nerd Report: Who are you closest to in the Maze Runner cast?

Thomas Brodie-Sangster: Oh, I don’t know. It’s funny, we all get along very well as a group and sometimes in that group, you take away certain people and you realize actually it’s only with the group that it works. But that’s not the case with these guys. It’s really nice to hang out as a group or split apart into separate groups and then just have one on ones. It’s too hard to tell.

Nerd Report: What is it like working with Dylan O’Brien?

Thomas Brodie-Sangster: He’s great. He’s a great guy. I really like him. He’s a good friend and he’s very, very passionate. Very leading and inspiring. He’s in every single day, he’s in every single shot really and it’s tiring, very tiring. I remember on the first movie he was completely beat by the end of it. Everyone was. So he’s great. He’s a great guy and he’s also really fun, really cool and talented.

Nerd Report: When Newt turned into a crank in the dream sequence, how hard was that to act?

Thomas Brodie-Sangster: It was great. We had four hours worth of makeup. We looked like cranks and we looked scary and cool. It was fun to be in the same movie, still playing the same character but get to be a crank.

Nerd Report: What are your plans for the future?

Thomas Brodie-Sangster: Figuring out what I’m doing. At the same time moving forward and not getting stale or bored, having a good time, enjoying life, being happy, surrounding myself with good people, friends, family and hopefully continue working as a jobbing actor and getting some interesting, cool roles, different parts, working with some cool, fun people in cool, fun places.