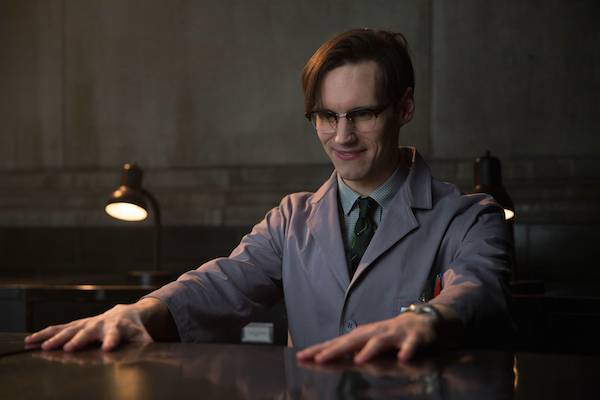 In the season two premiere of Gotham, we saw Edward Nygma talking to his own reflection in the mirror, but his reflection was a different person. The stars and creators of Gotham have been making sure all the fans know that season two is going to be different. They’ve admitted some mistakes and vow to tell a serialized story week to week, all about the rise of the villains in Gotham City.

That’s good news for Smith, because we know Edward Nygma ultimately becomes The Riddler. We’re not there yet though. I got to speak with Smith by phone as he walked around New York. Gotham airs Monday nights at 8 PM on Fox.

Nerd Report: Early in season one, Bullock said, “Hey Nigma” and it sounded a lot to me like “Enigma.” Was that a hint?

Cory Michael Smith: Well, the badge that I wear at work says E. Nygma. So that identity is there certainly from the beginning. It’s definitely not embraced by him. I’m sure in his life he has found that he loves his name. I requested that my chair actually say E. Nygma. I think it’s just such a beautiful identity for he character, but to actually embrace that hasn’t happened yet.

Nerd Report: Have they ever stumped you with a riddle that you didn’t get until you read the answer?

Cory Michael Smith: Oh sure, absolutely. There was one, we’re on a bridge, I start this riddle to Donal. It’s about crossing the river and I never give the answer in the episode. The barrage of tweets I got being like, “What was the answer?” I just couldn’t respond because I didn’t actually know. So yeah, sometimes that happens. The character is far more clever than I am so I do rely on the writers to come up with cool stuff that I otherwise wouldn’t. When I first started the show, I would go on Twitter with my own riddles. I did that for a while and actually some of them I was really proud of, but I didn’t continue doing that.

Cory Michael Smith: This one was a goat, a vegetable and something else.

Nerd Report: Right, you take the middle one first. The fox won’t eat the corn while you’re gone. Then you come back for the corn but you bring the chicken back. Then you take the fox over while the chicken waits so the animals are never left alone with something they’d eat.

Cory Michael Smith: Okay. That would make sense. They probably did a variation on it. One of the writers, his name is Jordan Harper, I think he mans the ship on the riddles. There are some good ones coming up this season for sure.

Nerd Report: So we heard there are some changes coming in season two. How is that going to affect Nygma?

Cory Michael Smith: Well, there are so many changes. His changes in particular, a t the end of season one, you saw his head explode. He really, truly cracked. What we’re going to see in season two, some time has passed by the time we see Ed and what has emerged from this explosion, his cracked head, is his ego and id are kind of at war and are very really truly manifested and battling each other. It’s all happening inside of his head of course but these two factions of himself are incredibly real. And so the beginning of season two, the first handful of episodes really are a war in his head. The change I guess for me as an actor is that I’m playing two characters, which is very exciting. And the new character is definitely not The Riddler, but it is the part of himself that will pull him towards that identity.

Nerd Report: When Gotham becomes more serialized, does that give Nygma further to go this season?

Cory Michael Smith: Oh, certainly. Last season was very slow and we spent a great deal of time with this person leading a very pathetic life. Essentially what happened at the end was the floor dropped out. He’s been living on the top floor of his life, looking out the window, appreciating how great the day is and trying to make friends up there, having very pure intentions. So we spend time with this person and it’s just not working. His life is really sad. So all of a sudden, he falls in love with this person and it’s the first time he really has something to lose. He’s never had anything to lose before. So he’s positioning himself to be very hurt and damaged. With that, as we all know, any time you’re hurt and damaged, you change. You evolve. You grow up. You get the scar tissue, perhaps get a little bit stronger hopefully. So that’s what’s happening to him and it’s happening very quickly and very severely. This love/obsession has made him kill somebody. That completely shifts your understanding of the world and your place in the world. As we move into season two, he’s essentially having this conversation with himself and confused by all these things that he thought when he did it, which is: I’m a horrible person/did I just practice justice? Was this maybe a great thing for Kristin and me and the world, what a horrible human being he was? Balancing all these things felt delicious. It’s the first thing I’ve ever done in my life to really take control of the situation and make a massive change. It’s very exciting, very addicting, so this is a conversation he’s having with himself. So there’s so much, so much, so much change that’s going to be happening with him. He’s going to be growing up very quickly.

Nerd Report: He’s in love, but she’s not in love with him, is she?

Cory Michael Smith: At the end of season one, she is not, for sure. When Edward becomes obsessed with something, he’s absolutely obsessed. This other part of him emerges and he’s kind of playing the role of coach, encouraging him, challenging him, reprimanding him, embarrassing him. What we’re going to see is Ed is going to be learning new tactics to get what he wants and he’s going to be practicing. So his behavior is going to be morphing. It’s going to be very much influenced by this other part of himself. He’s learning how to get what he wants and his number one target is Kristen for sure.

Nerd Report: Is Harvey any more patient with Ed?

Cory Michael Smith: Ed has a lot going on. As we saw towards the end of season one, he’s not really as interested in being friends with Harvey and Jim as much as he was. He has more important things to worry about now than these guys who just wouldn’t be friends with him. That interaction, though it may increase in the future, at the top of the season that’s not really what we’re looking at with Ed.

Nerd Report: How different is your role in Carol?

Cory Michael Smith: At a certain point they go on a road trip together, the second half of the film. I play a traveling salesman that they run into a couple times. It may have some crossover for sure. They’re both very artistic endeavors, but I think the audiences they’re reaching out to are very different.