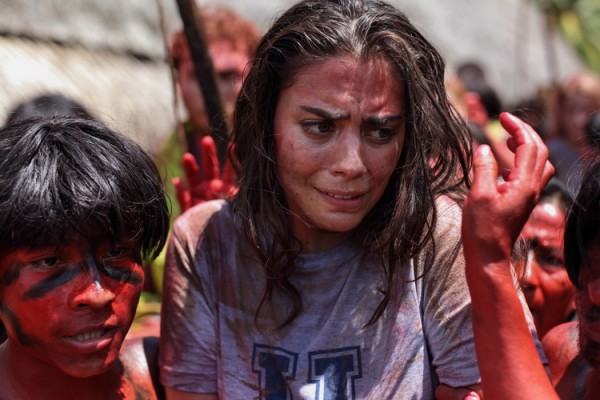 “I don’t want to be the boring scream queen that makes the same scream every time.” – Lorenza Izzo

A lot can happen before a movie comes out. In the time it has taken for The Green Inferno to reach theaters, I have joined the Nerd Report family, and shaved my head and beard. Two years ago, long before I wrote for this site, I had a chance to see The Green Inferno at the Toronto International Film Festival. I also spoke to Lorenza Izzo, the film’s heroine, and I must have made a good impression because she still remembers me.

Eli Roth’s new horror film is about a group of college students who follow a charismatic activist to South America to protest deforestation. After chaining themselves to bulldozers and posting it online, their plane crashes and they are captured by a tribe of cannibals. The Green Inferno opens Friday, September 25. 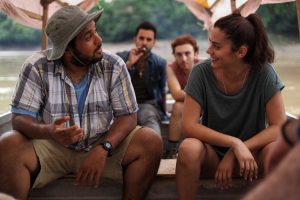 Lorenza Izzo: How you doing? Did you sh– tha– [Points to my head]

Nerd Report: Yes, I used to have hair and a beard.

Lorenza Izzo: How good am I that I remember that? It’s impressive. I do not remember names but I don’t forget faces.

Nerd Report: And that was two years ago in Toronto for Green Inferno and then this January for Knock Knock.

Lorenza Izzo: We’re talking about this again. I don’t know what to tell you.

Nerd Report: Well, you’ve been waiting two years for people to see The Green Inferno. How does it feel for it to finally come out?

Lorenza Izzo: Amazing. I’m still pinching myself hoping that it’s actually going to be real. It’s a little bit stressful because you make a movie, you work really hard on it. It was a battle. This one was a physical battle to even get it done. It was a huge challenge because of the obvious conditions in which we were making it. You think it’s going to come out and it’s going to change your life and you’re so excited, and then it doesn’t. That was a huge lesson for me. I realized so much of this work becomes ego because of the industry. You want to have your name out there, you want to be famous, you want to be known. That’s a very natural thing to want or expect because it gives you more opportunities. For me personally it was a great lesson. You know what? Nothing is for sure in this career. It’s never going to be so we need to move onto the next one. For me hat was great in that sense. The silver lining of it was a beautiful lesson, but obviously it’s not just about me. It’s about the filmmaker and the director of photography and the producers and the financiers. Everyone who chipped in to make this insanely original, beautiful project, it needs to be out there. It’s the kind of movie that I think needs to be seen. Especially because it went under the bus, not because of the movie, and the movie suffered for it. It happened because of financial reasons and disagreement. Thank God the lawyers worked on it and then Jason Blum came in to save it, so I’m really frickin’ happy.

Nerd Report: It did change your life though. You got married.

Nerd Report: So it was over the course of three movies you got to know each other?

Lorenza Izzo: Yes, and the TV show, Hemlock Grove. We’ve worked together quite a while in different capacities. I truly admire him as a filmmaker since the beginning. As a filmmaker, Eli and I share a lot in common vision-wise and what filmmaking truly is, and what it takes to tell a story that you’re really enthusiastic about. The whole Chilewood world does that too, so we’re part of this moving family situation where we really want to tell awesome stories in an awesome way where we have fun. We’re so lucky to do what we love for a living that you can’t lose that aspect of it. If not, why else are you doing it? 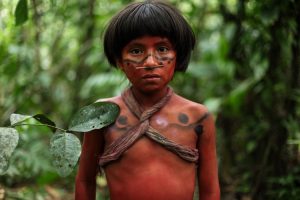 Nerd Report: There’s a picture in the check-in sweet of you and one of the tribal boys holding a little turtle. What’s going on in that picture?

Lorenza Izzo: That was so sweet. I speak Spanish. That’s my first language so the kids are adorable. They thought we were nuts that we did this for a living but for them it was a blast. It was like Halloween for 21 days where we get paid for it too. So they really approached it full on and that was definitely beneficial for me. In between takes, I got to play with the kids. That moment, we were shooting that grueling scene where they all come down the mountain. We’re coming in the canoes, the slightly Apocalypse Now shot which was a very hard scene to shoot. Even Eli was holding a camera. We were all doing five jobs at the same time to get the really hard shot. In between, the kids would come with these pigs that were so sweet. One kid noticed that I really like little animals because I was being such a white girl, like, “Oh my God, those are so cute.” I was so embarrassing. The kid came up with a tiny turtle and he stole my heart. We were buddies the whole movie. They’re awesome. Those kids are sick. They have such a cool view of the world and they taught me a massive lesson. I feel very blessed that I got to spend time with people like that.

Nerd Report: What were the most emotionally or psychologically demanding aspects of The Green Inferno?

Lorenza Izzo: I think just staying with it was a big one. It wasn’t just one particular moment. I think there was a big demand of being on the whole time because you didn’t know what scene you were going to shoot next. You kind of had to prepare the whole script, or at least the whole jungle chunk beforehand and be ready to be called for whatever because the light might match what we shot yesterday. That was a definite emotionally hard one to do because you could go kind of chronological, but when it all goes to sh*t it’s kind of all the same but I wanted it to have layers. I didn’t want to be screaming the same way every time because that’s not the way humans are. We’re going through different layers of terror so to speak. I don’t want to be the boring scream queen that makes the same scream every time. I was very conscious of, “Okay, how would I react in real life? How do I react when I get painted or when a friend of mine’s being eaten? How does that feel?” That’s a really hard thing to do. I don’t think a lot of us have that experience to base it on. So we were blessed at the same time as we were cursed to be in the real place. We were reacting to everything that was happening.

Nerd Report: Did you think about how it’s much sexier to make a big display of chaining yourself to a bulldozer, even if it might not really do anything? They don’t make movies about people who file paperwork.

Lorenza Izzo: It’s like Justine’s Dad and Sky Ferreira’s character, they’re representing the reality of how it should be. It’s interesting that the father tells her, “No, there’s ways to go about this. You can help but there’s ways.” And she’s like, “No, no, no, I want it instantly.” It’s such a reflection of society today. I see my little sister who’s 14 and I do too want everything instantly because everything is a retweet and everything is right away on your phone. So she wants the fast lane. She wants to be recognized and save them. She’s really not understanding any thing. 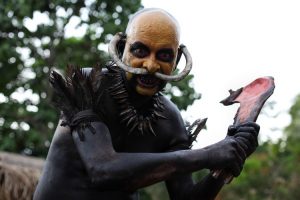 Nerd Report: So did you think about how those big gestures might ultimately be empty?

Lorenza Izzo: Completely. Look, I approached it as a character that was enamored with the valiant guy and at the same time this was a valiant cause and a valiant action taking situation where we’re going to attach ourselves to bulldozers and chain ourselves and we’re going to show them and we’re going to shame them. I think that’s the key word, shame them. I think Justine doesn’t quite take the time to understand what he means by shaming. Once she’s doing there, she’s like, “Oh, I’m ashamed of myself. Shame went all the way deep down to my heart. This is bullsh*t.” I think that’s a great turning point. If you realize they’re all happy in the airplane but Justine is pissed off, not only because she was used, but because she feels dumb. She feels so stupid for not having thought this out and being like, “Oh, maybe chaining myself to this is not really valiant at all. I’m actually doing nothing and these people are all crazy.” That’s a huge learning step for her. The second leg of it comes from understanding and being in a gutter situation with the cannibals, the same people they were trying to “save” as if they needed saving, or the way they approached it was the right way to save them.

Nerd Report: People who are all talk tend to be pretty convincing, don’t they?

Nerd Report: Are you going to do more comedies like Sex Ed?

Lorenza Izzo: I like the idea of the mic drop. I think after Green Inferno, I’m done for the horror genre for a little bit. I’m going to stay away from it on purpose. I really want to do comedy or romantic comedies and drama.