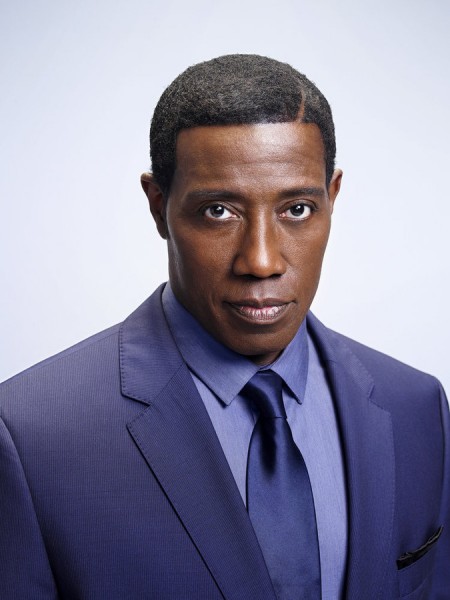 Wesley Snipes is starring in a TV show about gambling in Las Vegas, and I didn’t get to him before all the Comic-Con press asked him if he’d say “Always bet on black.” Oh well, at least the new generation of reporters are doing their duty. They didn’t get to sit down with Snipes for Breakfast. That just so happened to be the timing of my interview with Snipes before NBC’s Television Critics Association panel for The Player. He ate scrambled eggs and fruit.

Snipes plays Mr. Johnson, a unique kind of pit boss. The House takes bets for real life events, but they have a Player (Philip Winchester) who tries to prevent crimes and tragedies from taking place. Johnson shows his moves too when his new Player confronts him. For now, they are all playing the game. The Player premieres Thursday, September 24 at 10 on NBC.

Nerd Report: I heard that someone has already asked you about using your famous Passenger 57 line on The Player, so I’m not the first.

Wesley Snipes: “Always bet on black?” It’s amazing how that line actually resonates with people, because I’m not a gambler. So even when we filmed it, it didn’t really sink with me. I kind of said it, but it wasn’t really like, “Hey, I know this is a cool line.” Then as it turns out, it’s a very popular statement amongst gamblers. Will we use it on the show? I don’t know. If we can get away with it, maybe. Why not?

Nerd Report: The Player has some other good lines like “I’ll take that bet.” When he comes back and you do the Bravo clap, was that in the script or something you added?

Nerd Report: You’re responsible for explaining the rules of the show basically. Was it a challenge to make that feel natural?

Wesley Snipes: That’s the trick. I still hold over some of my classical theater training and some of the tools that we use to speak on stage, so I try to bring some of that to the character. Remembering lines, I’m going to have to develop a real photographic memory because our scripts come hot and heavy, and we only get them a few days before we start filming, if a few days.

Nerd Report: Have those theater tools come into play in your movies too?

Wesley Snipes: The benefit I found from having training is that it gives you the sense of what the overall story is about and how to pace yourself both as an actor, but how to make choices that are true to the character, even though you’re shooting them out of sequence. That’s something I learned from the theater. You can play a scene, but sometimes your choices in that scene might not be in context later on in the plot of the show or the story, or it’ll be a contradiction to something that you’ll do later on. My goal is to try to visualize where we’re going to go and then make choices in the scene that are also true to the character’s storyline, where they’re at either emotionally or where they’re at in the situation.

Nerd Report: Was it your request to work a little martial arts into the show, or did they request that of you?

Wesley Snipes: I think they anticipated it. It wouldn’t have been interesting for me to come and play the character and not bring some of the martial arts to it. Part of the attraction in doing a character like this is to be able to do some dramatic work, do character work playing different characters and using disguises and trying to make it believable. Juxtaposed to some dynamic action, which is kind of rare.

Nerd Report: Do you think we’ll see more of your martial arts in upcoming episodes of The Player?

Wesley Snipes: Absolutely. Absolutely. We’re going to bring some really interesting and exciting things, both for men and women and martial arts styles that people may be less familiar with.

Nerd Report: Have you kept up with some of the new martial arts like the Indonesian Silat?

Wesley Snipes: Silat is one of the core systems that I’ve been training for about 10 years or so. I know the guys and some of my guys are practitioners of the art. It comes from the lineage of some of the grandmasters out of Indonesia. I’ve inserted it in certain films, little pieces here and there, but we never highlight it like we will on this particular show.

Nerd Report: Are there any new martial arts we should keep an eye out for?

Wesley Snipes: Well, Aikijujitsu. These are combat systems that have a real urban flavor to it, kind of devastating. Not as flowery as you might find in Wushu and the Kung Fu forms but excellent for this type of a character because you can do a lot of damage with very little bit of effort. Mr. Johnson looks good. It’s important if he’s going to have to be physical, he looks good doing it.

Nerd Report: What’s harder to fight in, a suit or the whole futuristic Simon Phoenix costume?

Wesley Snipes: [Laughs] The suit is harder. The suit is tailored for you to stand there and hopefully look good, not to be functional.

Nerd Report: When you were looking for new projects, was TV very appealing?

Wesley Snipes: The idea of working with some really talented people behind the scenes, behind the camera and being a part of an ensemble cast, that was the most appealing thing about the medium. A couple of my friends had been doing some premium cable television and loving it. Loving the process, loving the experience, loving the opportunity to work with other talent that they admire. So it made a lot of sense, plus you get a lot of international value that way, opening up so many different markets which always can benefit you as a film star. That made it very appealing.

Nerd Report: What are the new films you’re working on?

Wesley Snipes: A great fireman drama that’s titled Arson. I’m developing two television series. We’re going to do something very interesting with Skydance and something very interesting with Sony again. Then all of the feature film development. Master Daddy is still my baby. I want to do a family martial arts comedy so that my children will have at least a movie that was made for them.

Nerd Report: I did a Blade story a few years ago and someone tweeted me that they can’t reboot Blade because you still own Blade. Is that true? Do you still own it?

Wesley Snipes: No. I never owned Blade. That was always a Marvel product and then from Marvel it was New Line who held the license for a while, but I never owned it.

Nerd Report: Could you have imagined how far Marvel would go in the future back in 1998?

Wesley Snipes: Well, if I could have imagined that, we’d be having a very different conversation. There’d be a lot more product out there. It’s nice to have been a part of the birth, or the rebirth I guess you could say, of Marvel. But at some point, we’ll get a chance to do some work together. We have been in conversations about some ideas I had for me. Of course, Blade is always in the background there, so we’ll see.

Nerd Report: Are they open to the possibility that your Blade still exists in their cinematic universe?

Wesley Snipes: Sure, that was part of the conversation and some other projects that they’re bringing forward that they thought I’d be a good fit for. So we’ll see. Our company, we’re developing similar comic book adaptive types of characters. I think one or two of our projects, personally, I think is going to put Blade to rest. I think we have something that’s going to blow Blade out of the water.

Nerd Report: Well, there’s no reason you can’t do both.

Wesley Snipes: Master Daddy we have a script, we have resources. Now we just find a director and the biggest challenge is to find the young actress who plays Lotus Biscuit. We’ve got to find a really beautiful, talented actress who’s also martial arts adept. Or a dancer who can learn martial arts. A discovery. I’m going to find a new action star, female action star.

Nerd Report: Is it very different getting into the film game now where you have to find all the resources yourself, than when you worked in the studio system?

Wesley Snipes: It only makes sense to mature in the business. Over time you begin to recognize what you contribute, the uniqueness of what you contribute and the vacuum that there may be, that your type of part or your contribution to film. So you want to get better deals. If I owned Blade, our company would be Marvel. [Laughs] It would be Marvel Wes. So it just makes a lot of sense to pursue the producer side of it. We were doing that back in the ‘90s and in 2000s producing both film and television. I’m going to continue to pursue that. It’s easier to take the role and just act, but you don’t have the same control over content at the end of the day. Actors have very little say in the final edited version of the film. Producers have a lot more say. I like that producer position.

Nerd Report: Were you surprised Undisputed generated so many subsequent films?

Wesley Snipes: Yeah. The attraction for me doing Undisputed was one, to work with Ving, and two to work with Walter Hill. I wasn’t as locked in on the whole story. I had done boxing movies before but to work with those two guys made it all worthwhile. Anything that happened afterwards was great.