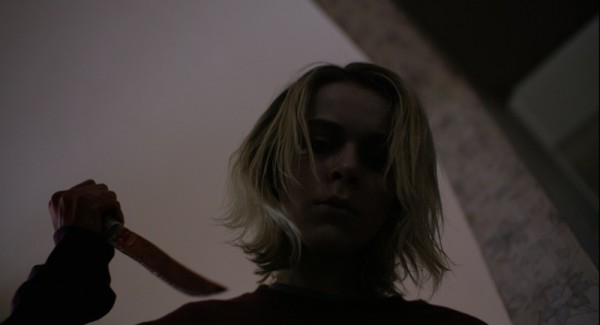 As February begins with a tone that only exists in indie films, I knew it was a film that only exists for film festivals. It could still be good, but it’s already ruled out any kind of public appeal, even in niche VOD markets.

When a film sucks all the life out of a frame, that is an artistic decision. That slow, somber silent atmosphere does not exist in real life. There’s nowhere you can go that is that still. Real spaces are still filled some noise, music or some sound. Even nature has all the animals, birds and insects. The set of the film itself isn’t as still as it’s constructed to be on camera either. Even the lightest skeleton crew still has a couple people milling about waiting to do their job when the director calls “action.” Throw in a monotone score with a pulsing metronome tick tock and it’s just every lazy shorthand.

So the artificiality of that calls attention to how mopey and broody the filmmakers want us to feel. Bramford boarding school is closed for the holiday (February would be President’s Day? Martin Luther King Day? Do schools really clear out for those mid-semester holidays?) and Kat (Kiernan Shipka) and Rose (Lucy Boynton) are left overnight to wait for their late parents. Meanwhile, Joan (Emma Roberts) is on the run and given a ride by a concerned man (James Remar) and his wife (Lauren Holly).

February doesn’t understand the difference between foreshadowing and giving it all away. I’m going to end my synopsis above, but writer-director Osgood Perkins didn’t show the audience that consideration. Big “reveals” will be accompanied with the feeling of, “Yeah, you told me that five scenes ago. I understood the relationship when you revealed the character. There’s no further payoff.”

The script also wants to speak vaguely about pregnancy, but it’s very clunky. I mean, there is a way that people dance around sensitive subjects. It’s so natural, when it feels like a writer intentionally using nonspecific words, it’s glaring. It also blatantly makes sure we know the geography of Bramford when it comes into play for our travelers.

I can certainly understand the appeal for Shipka to get to play such a dark murderous character (spoiler for the photo they released in the program online), but it seems she is trying too hard. Boynton is a wonderful discovery with a captivating femme fatale look, so if nothing else, February made sure I will always remember her and look for her in future roles. This one, though, might make people strive to find meaning if they’re forced to sit through it in a festival schedule, but it’s an empty experience for anyone seeking out pure cinema.