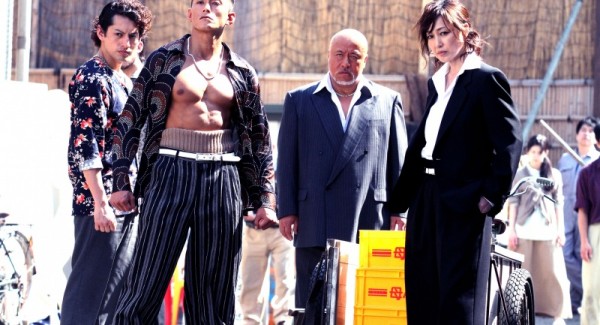 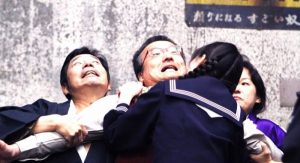 So wait, they’re yakuza and vampires? Honestly, how has no one thought of this before? I mean, I can’t say for sure they haven’t. I haven’t exhausted all the yakuza films of Japanese cinema. It is a good idea though. It reminds me of the American vampire film Innocent Blood where a mafioso is bitten and turns all his men into indestructible killers. It’s been too long though. The world definitely needs to see Takashi Miike’s take on vampire yakuza.

The plot feels like fairly standard yakuza gang war, with the twist being that a dying vampire turns his protege so he can avenge him. So ensues an epic battle between yakuza gangs with enhanced powers. Although I imagine they still go through a lot of expensive suits that shot up and torn by swords, but they’ve got yakuza money to replace them.

The action gets a big kick up with the inclusion of Yayan Ruhian adding some Indonesian style to traditional Japanese swordplay, which is normally too fast to even see on camera, as evidenced by the pre-title fight scene. After that, the fight scenes are all clear and visible, although sometimes we are seeing a yakuza from behind as he’s kicking. That’s an effective stylistic choice. It’s not hiding the action. 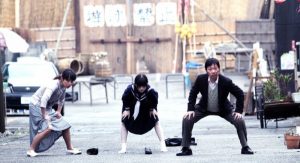 But more than the martial arts between immortal bloodsuckers, it’s the other crazy creatures who show up that made me shake my head in pleasant disbelief. There’s a goblin with a beak, but my favorite is a full plush costume who executes full fight choreography. Even Ruhian’s costume is bizarre. He wears a backpack with rolled up posters sticking out even while he fights.

There’s some good body horror among some of the yakuza. The female boss gets to display the grossest bodily secretions. I also enjoyed a new vampire’s realization of how his skin heats up in the sun. 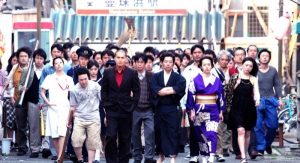 I honestly wasn’t too involved with the yakuza plot. I ultimately didn’t care which gang won, but Yakuza Apocalypse keeps escalating the crazy characters, I was always riveted to see what came next. The climax alone lasts for about 45 minutes as everyone gets a turn!