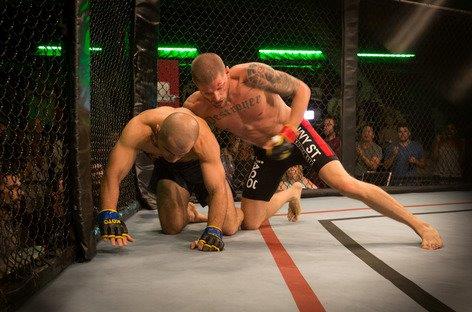 I already feel guilty enough spending more than two weeks with the Television Critics Association doing interviews morning ‘til night, sitting most of the day and eating catered food. When the panel for Kingdom started talking about how intensely they work out made me feel even worse, although just watching the show makes me feel like I should turn it off and get into the gym.

After the TCA panel, I got to interview Matt Lauria, who plays Ryan Wheeler on the show. Wheeler was Alvey Kulina (Frank Grillo)’s big new fighter, even though Wheeler was his girlfriend and partner (Kiele Sanchez)’s ex. Lauria and I talked about working out and how Wheeler’s victory will affect him in season two. Kingdom airs Wednesdays at 9PM on DirecTV Audience Network.

Nerd Report: Just hearing you talk about working out gave me flashbacks to the “Cut Day” episode.

Nerd Report: The show always makes me feel guilty about not working out more, even though I’m busy watching screeners and writing. “Cut Day” made me think that’s too much.

Matt Lauria: Hey man, never underestimate the power of being half naked on national television has a motivator. Here’s the thing, the show is so demanding. A heavy part of those demands is the pursuit of authenticity. So the fact of the matter is, as hard as we train, these fighters train way harder because our full time job is acting 12 hours a day. Their full time job is training for five, six, seven hours a day. There’s a lot of pressure to bring reality to it, so it’s indispensable. There’s a lot of mornings where I don’t feel like getting up and conditioning before work or going to the gym after work at 11PM, trying to sneak in that workout before they close at midnight, but you just can’t afford not to. You have the authenticity of the show resting on your shoulders to a certain extent, all of us in our own various ways. So you can’t afford to weaken it in any way.

Nerd Report: Were you essentially training for the finale fight for the entire season?

Matt Lauria: No. So much of it is getting it into your body and the muscle memory. It’s like ballet or any other thing that’s so specific and technical, you can’t fake it. There’s no padding or any clothing things that are masking what you can do or getting a double in there. So either you can shadow box or throw punches, or you can’t. You can’t really fake it unless it’s in your body and you know how to turn your hips. So we started training hard beforehand. We trained all the way through and then the fight, to a certain extent in the end, was a culmination of that but we only started approaching that choreography maybe a week and a half out. We had three or four rehearsals for that alone. Hopefully next time we’ll be able to spend a little bit more time rehearsing to get it even more fluid.

Nerd Report: Wouldn’t they build choreography sessions for that throughout the show?

Matt Lauria: Well, you’re training to be as well rounded a fighter as you can be, as an actor. Also to highlight the specific gifts and abilities of your type of fighter, your specific character. So I’m always hunting after that physicality and that physical vocabulary, but then the scripts aren’t always completed that far in advance so we don’t know exactly how the fight’s going to go. Then it’s a process of along the way, we’re filming other scenes. There was a fight between myself and Alvey last year. There’s sparring scenes, so those all take very unique attention from our choreography, Joe Daddy Stevenson. Then Joe, when the fight script comes up, goes, “Okay, we’re going to have to have a fight. This is what it’s going to look like.” He runs ideas by Byron. They talk back and forth. They come up with choreography. He films it with his real fighter, sends it back. There’s notes and then eventually when it’s finished, we get it maybe a couple weeks out. We get a little time to let it marinate and then we get into the practicing of it. And also truthfully, there just isn’t the time. You’re working 12 to 14 hours a day. You’re squeezing in a fight rehearsal on your day off.

Nerd Report: What does the victory do for Wheeler?

Matt Lauria: What a crossroads. I don’t want to fight, I don’t want to fight is the sort of mentality coming out of prison, or the ideals. Then it sort of whets an appetite that has been dormant within him. With that, what comes with that? Once you let the animal out of the cage again, what does that become? It’s a pretty pivotal moment and it definitely sets up much of what we see this season.

Nerd Report: Did you know the backstory about Wheeler’s father when you got the part?

Matt Lauria: The first draft of the script, I believe it was implied that I’d killed him. Then at some point along the line, Byron presented that he was just perhaps paralyzed. That’s what ended up happening, which is a way worse reality to live with. If he’s gone, hopefully you can make peace with it. Hopefully you can find some shred of forgiveness for yourself and try to repent and make remunerations for what you’ve done. But if the guy’s in a chair and his life is ruined, it’s a lot more weighing on you. That presented a far more painful obstacle for the character.

Nerd Report: Are the parents still in the picture this season?

Matt Lauria: In a really big way. There will definitely be many more layers of the relationship between Ryan and his dad that emerge and even new pressures and new demands on an already heavy spot for him.