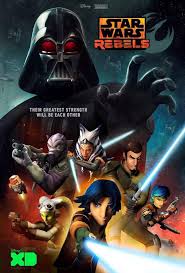 For those who don’t know, The cast for the series is made up of Freddie Prinze, Jr. as Kanan, Vanessa Marshall as Hera, Tiya Sircar as Sabine, Steve Blum as Zeb, and Taylor Gray Ezra. In addition, the series has brought back a number of classic characters with Stephen Stanton voicing Grand Moff Tarkin (played by Peter Cushing in the original film) along with Phil LaMarr as Bail Organa and other original actors for some characters including Billy Dee Williams as Lando Calrissian, Frank Oz as Yoda, and Anthony Daniels as C-3PO.