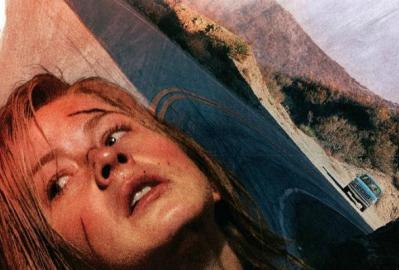 A movie about Julianne Hough trapped in an overturned car? Sold! Unfortunately, Curve can’t just do a survival movie about a trapped woman surviving the elements. It’s got to add a murderer plot which does not work at all.

Mallory (Hough) is driving across the country on her way to a wedding about which she’s conflicted. When her car breaks down, a nice stranger Christian (Teddy Sears) helps her get it started again. So, against her better judgment, she gives him a ride and her better judgment is right. Christian is a killer, and Mallory’s attempted escape by driving off a cliff, only pins her leg in the car while Christian stalks her from outside.

Christian’s turn is so ridiculous it bodes poorly for the rest of the movie. He delivers what is supposed to be a shocking line but it comes across like theater kids playing at what would be scary, but without the experience to deliver a menacing performance. All the psycho-sexual banter between Christian and Mallory is just as ridiculous. The dialogue sounds like a movie, no how people would really talk in an intense situation. It’s not the worst movie dialogue, but it seems based on having seen other movies, not on discovering the integrity of the situation the film has constructed. Add to that Mallory saying things like, “Where’s my phone?” to announce to the audience that she’s looking for her phone, and it’s clear that Curve is best when no one’s talking.

Whenever Christian leaves for a while, Curve is decent. Mallory deals with the elements, and the film makes Hough eat something gross. There is a missed opportunity with building a fire though. What if Mallory tried to build a fire big enough to signal for help, but if she let it get too big it would be a danger to her? That’s not a spoiler because it’s not in the movie. It’s the sort of dilemma that would have been dramatic. The survival story is still only average survival, and then the serial killer half is a big problem.

There’s a movie with Adrien Brody called Wrecked where he is trapped in a car wreck. It is a way better example of a confined survival thriller and it doesn’t rely on a secondary murderer to reach 90 minutes. See Wrecked instead of Curve.