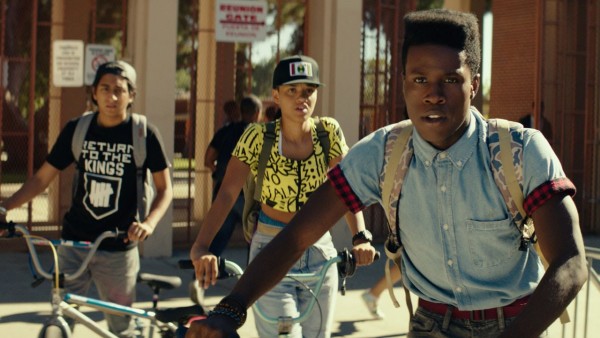 Dope was one of the big hits of the Sundance Film Festival. A bombastic, energetic twist on hood movies, Dope earned a quick distribution deal and was out in theaters by June. Only the version in theaters didn’t quite capture the energy of Sundance. I saw it again and was concerned that the sound mix was rather subdued, and it wasn’t just the theater I went to. People reported the same muffled quality even in private screening rooms tailored to press screenings.

Fortunately, the Blu-ray of Dope is what I remember seeing at Sundance. The music is no longer layered into the background. It intersects with the dialogue and sound effects. You don’t need to have a high tech surround sound system. Just the speakers on your TV are enough to capture the chaos of Dope. The digital copy too, and that’s just playing through your laptop speakers.

It looks beautiful on Blu-ray too. Filmed mostly outside on the streets of Inglewood, the sunlight shines off the locations and characters. The greenery surrounding everything looks rather suburban, and the pastels of the characters’ ‘90s inspired wardrobe really pop. There are only two short three minute bonus features, but they got everyone, even big producers like Pharrell Williams and Forest Whitaker.

Shameik Moore stars as Malcolm, a self-professed geek who just wants to get good grades and go to Harvard. When a drug dealer puts his stash in his backpack, Malcolm and his friends Diggy (Kiersey Clemons) and Jib (Tony Revolori) have to navigate rival gangs and college admissions officers. Writer/director Rick Famuyiwa keeps everything fun and not too message-y, though it does have a good message about education and individual passion.