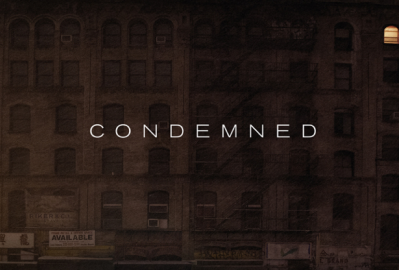 Every year at Screamfest there is a movie so crazy, it is legendary. Last year it was Parlor, now called Anarchy Parlor for VOD listings. The year before that, The Gauntlet would qualify. This isn’t a qualitative judgement. It is just an objective statement. There are things in these movies that no other filmmaker would put on screen. Condemned is the craziest movie of Screamfest.

Mya (Dylan Penn) runs away from home to live with her boyfriend Dante (Ronen Rubenstein), but is shocked to find Dante and his friends Alexa (Genevieve Hudson-Price) and Loki (Honor Titus) squatting in a condemned building. Other apartments include a meth cooker named Cookie (Perry Yung), a trans prostitute named Roxy (Kevin Smith Kirkwood) and her pimp Big Foot (Jordan Gelber), a junkie (Lydia Hearst) and her enabler boyfriend plus more dangerous characters behind each door. When the residents start coming down with a violent infection, it spreads and there’s nowhere for the uncontaminated to run. Oh, they’re also locked in at that point.

Condemned is also the grossest movie of Screamfest, and that’s saying a lot at a horror film festival. It really makes you appreciate being able to pay rent and live in a well maintained apartment. Even before the infection, it’s just a nasty set. The squatters have gone out of their way to decorate it with vile carvings and sloppy messes. Then the  puss filled sores and injections in the tongue and semen drenched papers slipped under the door and something with an eyeball that one ups Hostel.

Gross gore and outrageous nastiness is one thing, but that still doesn’t prepare you for Condemned. The characters populating the building are absurd. Cookie doesn’t just cook meth. He performs and has visions of models coming to life. Big Foot isn’t just an abusive pimp, he’s devoutly religious. A couple of beefcake Nazis (Johnny Messner and Michael DeMello) have a master slave relationship. Two cops appear just randomly and do random things. They impact the story but it’s still random. The building super is named Shynola (Anthony Chisolm) but I don’t think he’s working in an official capacity. This is not a microcosm of society. It is a truly random sampling.

When these characters interact, they try to play normal social dynamics. They deal with social faux pas and hurt feelings. When they debate calling for help, it’s a socioeconomic discussion between people ignoring common sense to justify squatting in a dump for free. Alexa laments her fruitless education in a quiet moment. These may have been moments designed to address relevant issues or help endear the characters to us, but regardless of how clunky they are, it’s just kind of amazing that they’re in a movie about people vomiting and oozing out of their armpits.

To capture all this, writer/director Eli Morgan Gesner employed some unorthodox techniques. The camera moving through the pipes were either shot with micro fiber optics or made to look like they were. That’s common for camera trips through exotic parts like engines or computers. Pipes are just pipes. It’s a whole lot of zooming through pipes! One symptom of the infection is that people’s vision pixelates until their friends appear as pixelated monsters. So the camera in a non found footage movie pixelates on purpose. No judgements here, but that is not something many people would put in a movie. Gesner pretty much confirms this whole movie is an expression of his id by putting an extreme shot of himself in the end credits.

When you finally get to see Condemned, it will probably be on VOD or DVD. I can’t imagine that lessening any of the impact of taking this all in. Some movies are just so raw that the only emotion to feel is disbelief that you’re actually watching something so unfiltered.