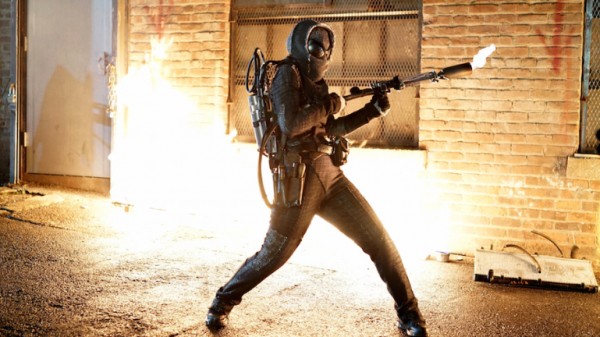 The name of the episode is “Rise of the Villains: By Fire.”

This episode is about the continued evolution of the villain known as Firefly, and the emergence of The Riddler. It’s been a slow burn, but things happen tonight that push Edward Nygma closer to becoming his infamous alter ego.   And Bridget’s infatuation with fire continues to grow this week, until it eventually consumes her.

Jim Gordon is still upset by the death of on of his young strike force recruit, and he’s determined to find out who torched him. So Gordon manhandles an informant, in an attempt to beat the information out of him. But another member of his strike force turns him in. And the new Captain, Michael Chiklis, writes up Gordon, after verbally tearing him a new one.

Selina is hiding Bridget from the police and urges her to skip town. But Bridget doesn’t have any money. So Selina suggest they rob an underground ring of human traffickers, who buy and sell women like slaves. The robbery goes down pretty much without a problem, with Selina taking point and Bridget backing her moves with the flamethrower. But Bridget wants to free the girls, while Selina wants to just take the money and run.

Edward Nygma overhears his lady, Kristin Kringle, talking about how nice his is, almost too nice. She feels he needs more of an edge, and she also senses that he is keeping something from her. This plants the seed that will lead to Nygma’s ultimate destruction.

Harvey Bullock interrogates weird little Ivy and finds out where Salina is. Then Gordon goes to confront her and find Bridget. But before Jim Gordon can find them, Bridget’s sadistic brothers kidnap her.   Prompting Jim to promise a distraught Salina that he’ll rescue her and help her. That’s a promise that becomes impossible to keep, because when he tracks Bridget down, he finds out that she torched her lowlife brothers. That’s three deaths she’s responsible for.

Remember, last week when Penguin cut off Butch’s hand so he could infiltrate Galavan’s gang. Well we find out that Butch now has done that, but he still hasn’t found Penguin’s mother. So Penguin sends him back to try harder, and oh yeah, now he has a hammer for a hand. But Galavan and his leather-clad sister catch Butch, and they attempt to beat his loyalty to Penguin out of him. We’ll see how that turned out next week.

Bridget is full-on Firefly now. After killer her brothers, she’s out of control. She goes back to the Human Traffickers and torch the place, killing the bad men and freeing the women. The police arrive to capture her, but she’s not about to surrender. And during the fight with the police she pretty much explodes, getting literally consumed by her own flames.

Kristen is at Nygma’s place. And after an intimate dinner, he confesses to killing her ex-boyfriend. He thinks this new info will be good news, as he’ll never be able to hurt her again. But Kristen doesn’t react well to the murderous confession, and she freaks out. Nygma tries to stop her from storming out, but in the process, he is too forceful and kills her. This leaves him confused and in turmoil.

At the end of the episode we find that Bridget isn’t dead. But she is very badly burned and in a lot of pain. She’s at a special hospital for freaks. They think she may be fireproof. So I’m sure she’ll return someday as a twisted version of her former self, and a super-villain in her own right. Stay tuned!

NOTE: Ed Nygma kills his Kris Kringle. Is that like killing Christmas? 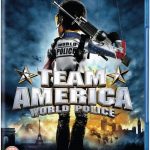 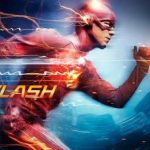