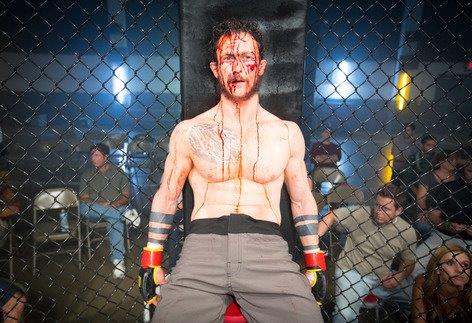 The cast of Kingdom gave a panel to the Television Critics Association for their second season. Among the things Jonathan Tucker revealed were that part of his training involves animal work, and that he’s not really comfortable sitting on a panel and talking about his work.

I got a one on one interview with Tucker to continue discussing his work on Kingdom. He plays Jay Kulina, a MMA fighter in his own right but who is struggling. Jay is also taking care of his mother (Joanna Going), having forcibly detoxed her last season. New episodes of Kingdom air Wednesday nights on DirecTV’s Audience Network.

Nerd Report: You had transformed yourself and changed your look well before this role. One of the first movies I saw you in was 100 Girls where you were understandably much younger, but was there a point shortly after that where you made a physical transformation for harder edged characters?

Jonathan Tucker: When you get to have your physicality become a part of your character, it just adds another dimension to it. Just being aware of your physicality, being aware of your movement and the way in which your body is being perceived and how it changes your gait and the way that you move in general, that’s just that other layer you get to add to a character. I think I’ve become more aware of that as I’ve gotten older and as I came to the conclusion it’s all about the work. It just has to be about the work. In terms of my career and me as an actor, if I’m not servicing the work, if I’m not servicing the story, if I’m not servicing the character, I’m not going to have the opportunities to tell the kind of stories that I want to tell after that job that I’m doing right then and there. That means taking big risks but it also means doing the work of Alexander Technique, on voice work, on dream work, of building a real fleshed out three dimensional character. Physicality is a part of it.

Nerd Report: You mentioned animal work on the panel. What is that?

Jonathan Tucker: Animals are such wonderful examples. They can be guides to help you find how a character moves and reacts, because they’re so pure. They have no other alternative. If they’re hungry, they’re going to eat. If they smell something, they’re going to smell it. They’re just unencumbered by so much of the stresses that we as human beings have. So you can find certain animals that your character will take traits from. There’s a lot of leopard/cat stuff. Jay’s got a lot of wolf, a lot of hyena things. Literally the way they move, the way they react and sense certain things around them spacially and other senses, you just kind of rip that stuff up.

Nerd Report: You also mentioned you’re less comfortable sitting and talking than doing the work. Is part of that because you train this much, your body craves it more and more?

Jonathan Tucker: It’s also just more fun and it’s easier for me to pretend that I’m a leopard than to be telling you I’m a leopard. You don’t even know. You’re just like, “Ooh, that’s a cool character” and I’m thinking something else. There’s something about sharing too much about what goes into the pie than just having a nice slice of it. I certainly will take the respite of not being at the gym. There’s no question about that. This stuff is part of the opportunity to shell the show with people who mean something and appreciate it and know about it. I’m grateful for that because we’ve really put our heart and our soul into this and we’ve sacrificed so much to tell the story, to create these characters, that we want people to see it. We want people to see it for lots of reasons but there’s nobody telling these stories of these fighters. You’ve got cop shows and firefighter shows and lawyers and politicians and all these other people who are making great sacrifices, get to see their stories reflected on screen but nobody’s telling stories of these fighters. Their lives can be as extraordinary as anybody else’s. So for us it’s a great opportunity to be able to share those stories on the big screen and we can’t get those out if people like you can’t get the word out.

Nerd Report: Jay says even when he wins a fight he can’t get another fight, so what are the forces against Jay?

Jonathan Tucker: It’s a very real issue, one of our fight consultants on the show is dealing with this right now. He’s a fighter who’s a D1 wrestler from Purdue. He is a mean striker. He doesn’t have a great record. When he first got in, he got tapped out by a few people, but he’s now lethal and it doesn’t make sense for anybody to fight him. If you lose to him, you’re losing to somebody with a bad record. And if you win, you’re beating somebody with a bad record. The risk to reward ratio is not in your favor. If you’re that fighter, you can’t get a fight. For Jay, that’s what’s happening. He can’t get a fight because people know they’re going to lose to him, and losing to somebody who doesn’t have a great record makes you look even worse.

Nerd Report: What kind of animal does Jay become when he’s taking cocaine?

Jonathan Tucker: That’s a good question. Hyenas are actually really interesting animals because I always thought that they were scavengers. But in point of fact, 99% of their food they catch and kill. They’re actually deadly and then they have that wonderful switch where all of a sudden they’re laughing like a hyena. They’re ferocious animals, I mean, truly ferocious. They’re physically almost unparalleled but people think something about them that isn’t true. They have this ability to bridge the world of great humor and great ferocity.

Nerd Report: Is Jay really a good influence for his mom?

Jonathan Tucker: Yes. Full stop. This season is different for Jay and Christina. This season is really an arc of humility for Jay. I think what you’ll see is really Jay more reflects behavior in order to change it this season, than he did last year where he thought he could muscle it out. Sometimes the hardest thing we can do is reflect, put up a mirror to those who are in pain or suffering or causing suffering. Jay is willing to do that for his mom.

Nerd Report: Does she balance him?

Jonathan Tucker: Yeah, I mean, sometimes you’re feeding one addiction for another. Is Jay kind of addicted to being her helper? Is there going to be a point in this season when he decides that my mother consistently says one thing and does another, maybe has always done that. Where Alvey has always said exactly what he’s wanted to say and then done it, but it’s never been anything healthy or conducive to a relationship with his son. My mom has maybe said one thing that sounds like it’s the right thing to say as a mom, but ultimately does something else. Then will I become fully aware of that? Will that become transparent to me? I think you start to see that in the second season. That doesn’t mean I’m going to give up on her.

Nerd Report: Is it hard to argue when she’s working a waitress job she’s not happy with, that sobriety is better for her?

Jonathan Tucker: Well, I mean, look, I’m not happy going to the gym but I’m grateful for the opportunity to be on this show and you’ll never hear me complain about it. We get hurt on this show all the time, like we hurt each other in a fight or sparring scene when we get hit. We don’t ever have to apologize to somebody else because I would never ask somebody to apologize to me. This isn’t the show that we’re doing. Mistakes happen. You know my heart. I don’t mean to hurt you. She shouldn’t be complaining about the job that she’s doing if she’s not doing drugs. Her sobriety is the most important thing. You’re going to see some surprises that’ll speak directly to what you said in the second season.