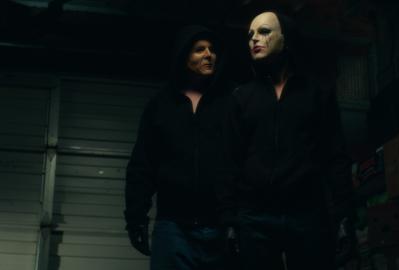 Being the final film Wes Craven produced is going to get The Girl in the Photograph extra attention. Wes Craven created some of the most important characters and films in cinema, let alone horror, but let’s also remember he put his name on a lot of movies for his friends and colleagues as a producer. They and Wishmaster did not bring forth the next generation of horror, and actually his best productions were remakes of his own films for new directors. Unfortunately The Girl in the Photographs has big ambitions it can’t navigate.

Colleen (Claudia Lee) has been receiving photographs of murdered women. The police can’t do anything because they’re just pictures and might not even be real. We are shown early on that they are real. Fashion photographer Peter Hemmings (Kal Penn) becomes obsessed with the photographs and wants to create his own death art so he brings his entourage of assistants and models to Spearfish, South Dakota to stage his photo shoot.

The Girl in the Photographs wants to say something about our culture of image capturing, from selfies to the high end Peter Hemmings type, but it doesn’t seem to understand what it’s saying. It opens with a William Burroughs quote about photography being obscene and sinister. Obviously someone is taking snuff shots and Hemmings is an opportunistic dick, but that’s not the nature of photography as an art form.

The source of the photographs is a mystery to Colleen but not to us. What is the point of keeping her in the dark and showing us the killers’ entire operation? It’s not suspense because the killers don’t use their superior awareness to any effect. They just drop more pictures off to taunt her. They’re slashers with a lame gimmick.

An example of how suspense does not work is when the killers are stalking someone at work. We see them approach in the dark wearing hoodies and masks while ominous music plays. There’s no misdirect, no ambiguous presence, just showing exactly who is coming for whom. Then it’s boring waiting for them to finally strike. In another dark attack, one character uses a flashbulb to see and the flashes reveal the killer approaching behind him. Which is not a reveal. It’s just confirming that yes, the killer is attacking in the dark from behind. Filmmakers who successfully use the flashbulb trick reveal something surprising in the flashes, not the obvious. Surprise deaths are not surprising at all because you can figure out by rules of casting or narrative position that certain actors aren’t meant to last the whole movie.

The photographs mean nothing to the story anyway. They don’t lead Colleen into danger, give her any clues to save herself nor give her a false sense of security. They’re just there and then the killers show up. At most, the photographs were a Maguffin to bring Peter Hemmings to town.

Hemmings is a dude bro fantasy of a vulgar douchebag getting high and banging models. Yes, they’re mocking him, but mocking without any real knowledge of fashion or photography. It’s like they heard this is what photogs are like or saw another movie about a caricature of a photographer. They still believe that a woman, let alone a model, would be so turned on by Hemmings talking about anal that they’d do whatever he wanted. Maybe if he negged or seduced and destroyed you could believe he manipulated them, but this is just the cynical attitude that being a dick makes women sleep with you. Not to mention his pretentious photography theory is based entirely on doing the opposite of what his subjects want. He’s pushing boundaries maybe but doesn’t have much of an active vision. It’s all reactive to taboos or basic etiquette.

It looks like a real movie because Dean Cundey shot it, but it feels like amateur hour. You’ve got Dean Cundey cinematography edited down to the most blatant gags and set to a score that’s telling you it’s scarier than it actually is. A scene filming a cell phone filming a sex scene is potentially interesting meta photography, but I think the only statement is that the amateur has poor sense of composition. If you want to revenge post your girlfriend’s gratuitous nudity, you at least want her center frame.

Wes Craven was a good guy. He used his clout to help other filmmakers get their start or transition into directing. He had a sense of wanting to give back and shepherd the new generation, which is admirable. The Girl in the Photographs is just one that didn’t deliver.