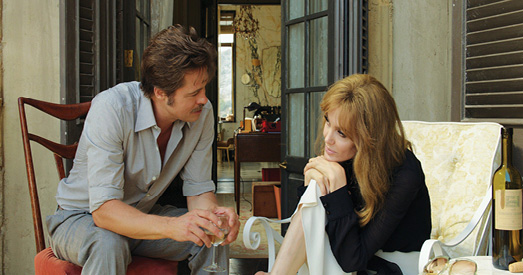 I didn’t love By the Sea but I’m giving it the benefit of the doubt. Any time you get to see a filmmaker’s soul on display, if that doesn’t intrigue you enough for two hours, you’re missing out.

Roland (Brad Pitt) and Vanessa (Angelina Jolie Pitt) are an unhappily married couple who spend some time at a seaside hotel. Next door is a newlywed couple (Melanie Laurent and Melvil Poupaud). Vanessa becomes fixated on them and Roland joins in in the hopes of reconnecting with his wife.

I love Jolie as a director, but as the screenwriter, and not based on historical events, these are her words she’s giving to her own husband to say. That’s gotta mean something. Even if they are as happy a couple as they seem, and this is Jolie’s rabbit hole/guilt trip about what if she were stuck in a loveless marriage, that’s heavy to act it out with her husband. This is their Eyes Wide Shut.

She has Roland say that Vanessa “resists happiness.” What a profound way to discuss depression. To be fair, Vanessa gets her share of verbal tongue-lashings out too. Pitt also speaks a lo of French in this, if that’s something the ladies might be interested in.

The love scenes are very sensual. We see a lot of Laurent and Poupaud, and all from the same angle because that’s Vanessa’s view of them. The consistent angle has an impact when it’s shown repeatedly and we’re not allowed any other perspective. It also says something that there’s a scene where Jolie is topless in a bathtub, but I’m totally drawn to her expressive eyes. Jolie directed and performed this shot, so she knew what she was playing with in regards to screen position and foreground focus.

The cinematography is beautiful. In addition to the perspective angle (which must have been carefully crafted since they’d be locked into it for the whole movie), shots of the couples on a boat at sea are gorgeous. The location doesn’t hurt, but it’s also framing the characters in evocative ways.

I understand that delving into the depths of unhappiness and tragedy might not be everybody’s cup of tea. Jolie knows too. That’s why she uses her clout in mainstream movies to make her passion projects. It’s still dealing with themes of voyeurism, manipulation and obsession so those are more popular and enticing angles. 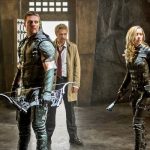 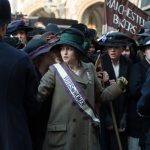