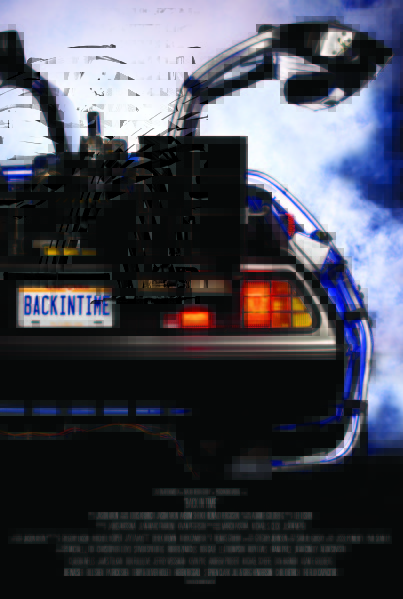 It’s hard to imagine there is anything I don’t already know about Back to the Future, but 30 years later I’m still obsessed with it. The new documentary Back in Time covers the same story of the film as many of the DVD extras do, but elaborates on that with stories about the cultural impact of the films.

Most of the fan projects relating to Back to the Future are new to me. I’d never heard of the mini golf course or the specifics of restoring the DeLoreans. Even the events I had heard of, like the Secret Cinema event, it was great to get a chance to see the magnitude of it since I was not able to attend myself.

Celebrity interviews like Dan Harmon and Adam F. Goldberg provide cultural reference points, since they grew up inspired by Back to the Future and both made ‘80s inspired meta shows. I think Harmon is a tad hard on the sequels, but maybe that’s part of his acerbic nature.

Some of the fan stories are life affirming and inspiring. The tenacity to build a time machine DeLorean with only a VHS freeze frame as your reference points is admirable enough, but this story goes on to prove a medical prognosis wrong. They end up driving the time machine to all 50 states, so I assume they shipped it to Hawaii and drove through Canada to make it to Alaska?

There were a few new tidbits about the movies even for me. I had never heard Michael J. Fox’s story about the Royal premiere before. And as much as I want there to be a Back to the Future IV, I would settle for one of those T-shirts with Back to the Future and the number IV crossed out with the international symbol for no.

Back in Time is now available on demand, streaming, iTunes, DVD and Blu-ray, and possibly still select theaters if I wasn’t too late!